Equalisation with EasySolar 48/5000/70 not working

I'm trying to perform an equalisation on my 16 Trojan T105 flooded cell batteries (2 banks of 8 x 6v in parallel). With batteries at 100% SOC, I pressed the equalisation start on the CCGX and although it read "starting..." nothing much happened - no bubbling of electrolyte. Do I need to tick the "Use equalization (tubular plate traction battery curve)" box in VE Config? Or is there something else I'm missing? I'm offgrid, no generator, 4kw of panels, with Victron EasySolar 48/5000/70-100 MPPT 150/100 Color Control. 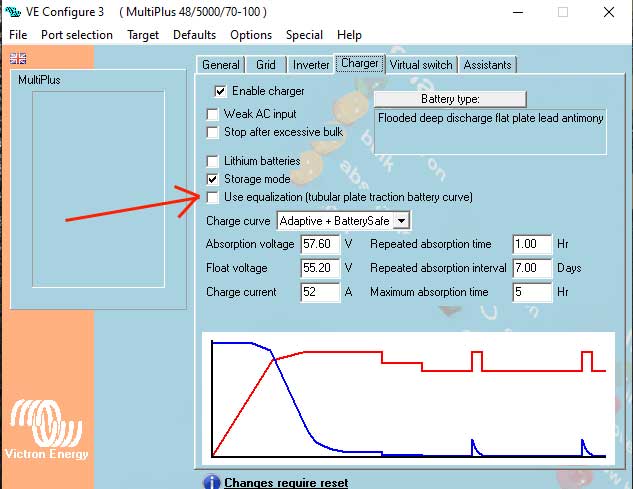 I would also set up equalisation on the mppt as well so it is on the multi.

On the mppt you can also set a schedule for equalisation. There is some caution though if you have older batteries and never done an equalisation charge you could have problems afterwards with the shed material.

And yes if you have not programmed equalisation in it will not perform the function.

If you have a dc system connected you should also disconnect it during the equalisation charge.

Thanks, Alexandra. I wonder if I posted my reply in the wrong box :)

Thank you very much for your answer, Alexandra. The batteries are less than a year old. The main reason I want to do an equalisation is that I let the electrolyte get too low on a couple of them and I think I need to destratisfy. Although I topped up at full SOC, the specific gravity test is still too low on these batteries despite them appearing to show a healthy voltage equal to the other batteries.

1. My next question is, when you say to set up equalisation on the mppt as well - How do I do that? With VE Config? (I haven't been able to get Victron Connect working - it's a source of ongoing frustration haha!)

When I tried my initial equalisation, I followed this procedure on the CCGX controller - Multiplus/Advanced/Equalisation/press to start..

2. The Multi manual describes an equalisation procedure below. Do I need to do this or is the CCGX procedure I described sufficient?

3.3.3 Activating equalisation or forced absorption The MultiPlus can be put into both these states from the remote panel as well as with the front panel switch, provided that all switches (front, remote and panel) are set to “on” and no switches are set to “charger only”.

In order to put the MultiPlus in this state, the procedure below should be followed. If the switch is not in the required position after following this procedure, it can be switched over quickly once. This will not change the charging state.

NOTE: Switching from “on” to “charger only” and back, as described below, must be done quickly. The switch must be toggled such that the intermediate position is 'skipped', as it were. If the switch remains in the “off” position even for a short time, the device may be turned off. In that case, the procedure must be restarted at step 1. A certain degree of familiarisation is required when using the front switch on the Compact in particular. When using the remote panel, this is less critical.

1. Check whether all switches (i.e. front switch, remote switch or remote panel switch if present) are in the “on” position.

2. Activating equalisation or forced absorption is only meaningful if the normal charging cycle is completed (charger is in 'Float').

4. On the MultiPlus (and, if connected, on the Multi Control panel) the three LEDs “Bulk”, “Absorption” and “Float” will now flash 5 times.

5. Subsequently, the LEDs “Bulk”, “Absorption” and “Float” will each light during 2 seconds.

a. If the switch is set to “on” while the “Bulk” LED lights, the charger will switch to equalisation.

b. If the switch is set to “on” while the “Absorption” LED lights, the charger will switch to forced absorption.

c. If the switch is set to “on” after the three LED sequence has finished, the charger will switch to “Float”.

d. If the switch is has not been moved, the MultiPlus will remain in ‘charger only’ mode and switch to “Float”.