The second part of the install would be to connect a PV system (MPPT) that would keep the batteries charged throughout the day. I would then allow a certain % discharge going into the evening. The PV array will be sized based on the power draw of the critical loads and the solar yield on an overcast day on the shortest day of the year (New Zealand - relatively high sunlight levels). On sunny days there will always be excess power available and I would like to dump the excess power into a hot water cylinder. I am looking at including the fronius Ohmpilot that would be connected to the AC-out (non critical load) of the Multiplus II. This way there will only be limited amount of power going back into the grid. I will only be installing the fronius smart meter and leaving out the Victron smart meter upstream of all the electrical loads as the fronius smart meter would be the only meter that needs to determine if the load is dumped into the hot water cylinder or if it is being exported back into the grid. I assume this is correct? Below is an overview of how I would like the final system to look: 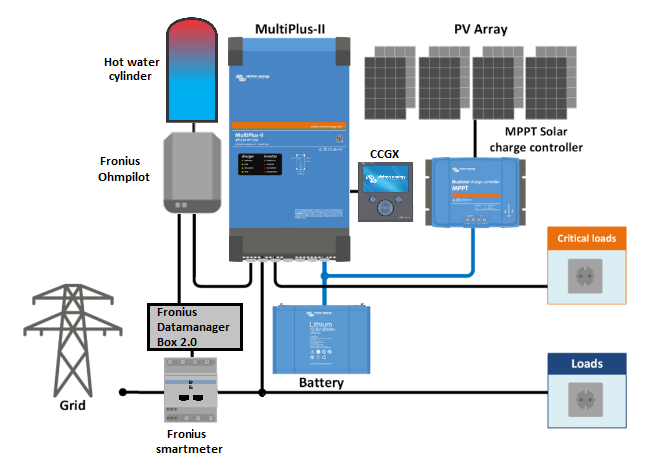 I look forward to comments and feedback on the above.

I think this could work, as long as you are allowed to feed-in to the grid if the water heater is fully heated.

Did you construct this system?

I only read your question now, but I'd like to know whether it works or not?.

Would a MyPV device be better in this case you think?

Or did you control the existing heating element of the boiler?