Using 100-140Amp alternators in Toyota's and VW's we found the following;

- if the vehicle is cranked over under 12.0V when the batteries are isolated and left at idle the BP-100 links them back without issue (as the alternator output current is typically 60 ~ 80Amps).

- if the vehicle is cranked over under 12.0V and immediately taken for a drive which pushes the alternator output to near max power output (80 ~ 140Amp), the BP-100 won’t engage and causes the alternator to output erratic voltages upwards of 14-16V which can trigger the vehicles ECU to go into limp mode.

Can Victron replicate the same issue and potentially a firmware update should solve it as I don’t believe it’s a hardware limitation as the BP-100 can handle a 600Amp peak? The BP-100’s should do it with ease.

Could you please provide a wiring diagram of how this BP is installed.

Sure thing please see below; 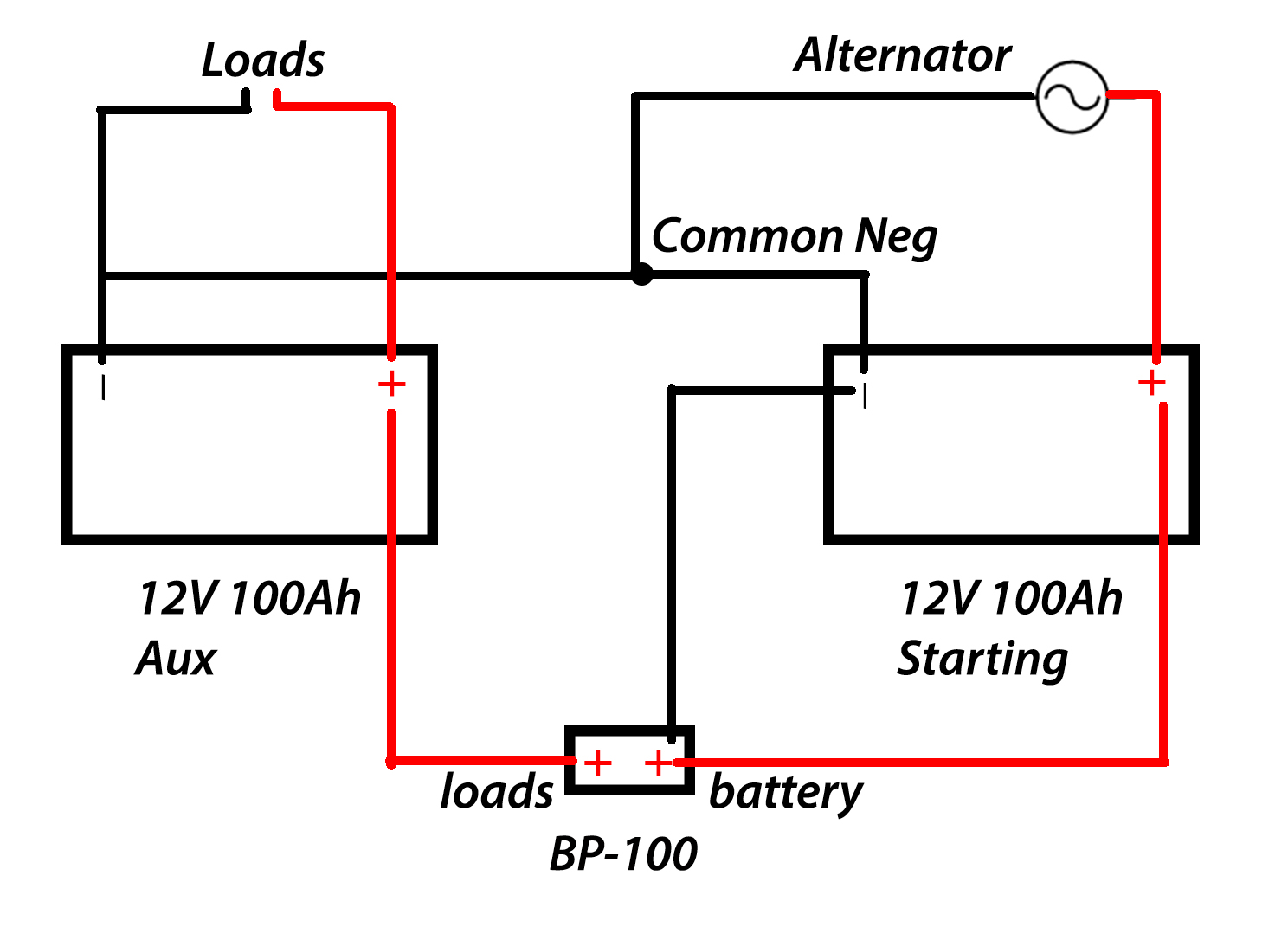 Ok check what settings the BP has been set to and pay particulature attention to the cutoff voltages.

If its cutting off because of Hi voltage then thats what its supose to do.

in your wiring diagram the alternator is charging the start battery and then once thats being charged the BP turns on and the Aux is then charged.

So this means that the Auxiliary battery is isolated away from the cranking battery at 12.0V and linked back in parallel at 13.0V.

No it's not cutting off because of high voltage as stated above, it's not engaging under load? I made that pretty clear.

The alternator output climbs very smoothly (due to ECU control) charging the cranking/starting battery until the 30sec time delay is triggered on the BP and then the high voltage issues begin and non engagement continues. It does not want to engage under load?

The alternator is a smart ECU controlled alternator and is only outputting max 13.4V when cold. AGAIN the issue commences/begins/is triggered when the the BP 30 second time delay is triggered and it's trying to engage.

Your professional attention to the repeated issue arrising in various makes and models of vehicles and alternators "under load" is greatly appreciated.

does anyone have the email address for Victron tech support? It does seems like these forums are no even looked at by tech support?

If you wish to escalate your enquiry through the normal support channel rather than the community, please go here : http://ve3.nl/help

I wouldn't be surprised if the battery protect is sensing a false short circuit condition. The first paragraph of the manual highlights how to avoid this.

I'm a bit curious as to why you are using a Battery Protect for the purpose of combining batteries? It is not designed for this purpose. More importantly, the Battery Protect is not designed for reverse currents from charging sources. This condition would occur when cranking, the start battery would be at a lower Voltage than the accessory battery.

There are an assortment of Victron battery combiner products available which are much more suited to your task.

Ask your dealer why he advised you to use a Battery Protect for your application rather than one of the Combiner products.

great thank you for the info, finally someone makes sense. The reason we use the BP's is because on the Victron website when you download the data sheet for these on the first paragraph it states:

"The BatteryProtect disconnects the battery from non essential loads before it is completely discharged (which would damage the battery) or before it has insufficient power left to crank the engine."

So one would assume that's it designed for engines with alternators and cranking/starting batteries??

"Battery Protect is not designed for reverse currents from charging sources." Good to know!!!! Wish the Victron website would state this in bold writing. Now we have to remove about 40 units from the field!

Anyways we'll look into the Cyrix-CT's or another product that will be better suited.

Victron’s lack of accurate marketing of this product is frustrating. It has burned so many of us.

Hi @ben, @Paul T, and others. I admit it took a while, but its done now: datasheet and webpage have been updated. The note "The BatteryProtect is not designed for reverse currents from charging sources." has been added.

For combining batteries there are battery combiners and isolators, only the cyrix has a standby current

nowhere in the manuals it says it can be used to combine two batteries.

But it doesnt say it the other way around either: we’ll add this to the manual.

I hope you get it sorted soon. And sorry to hear you ended up using the wrong product.

Can I use a Victron Battery Protect to Cut solar input on my motorhome when the engine is running?