Hello colleagues. We use BYD batteries in most of our installations. On some of our systems, after commissioning or adding new batteries, we get BYD high voltage notifications in the "Remote console" (screenshot 1). This is not a critical error and is not written to the "Alarm logs", but it does make our customers worry. 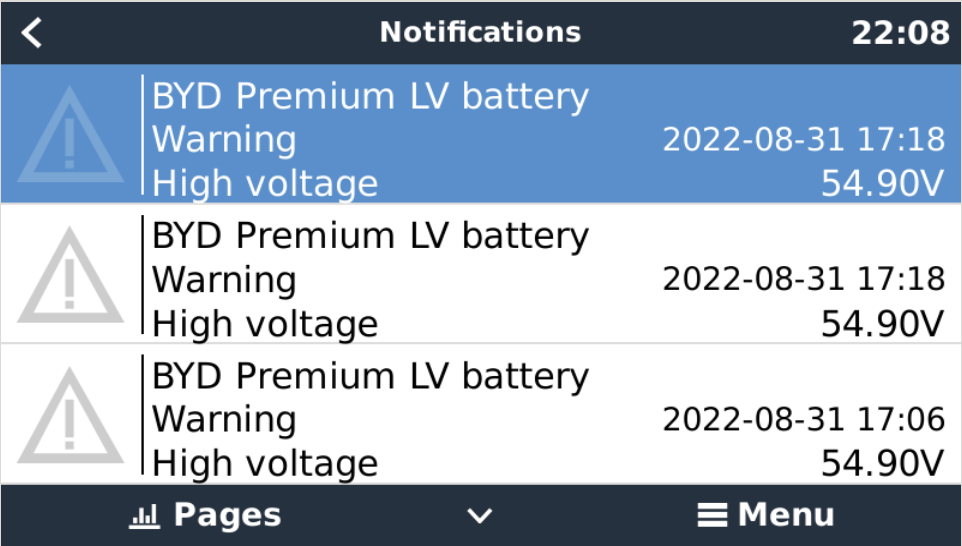 In reality, the battery voltage is far from the permissible maximum, and if you go to the menu of the battery itself immediately after receiving the notification, you can see that all the parameters are normal and it works fine (screenshot 2). 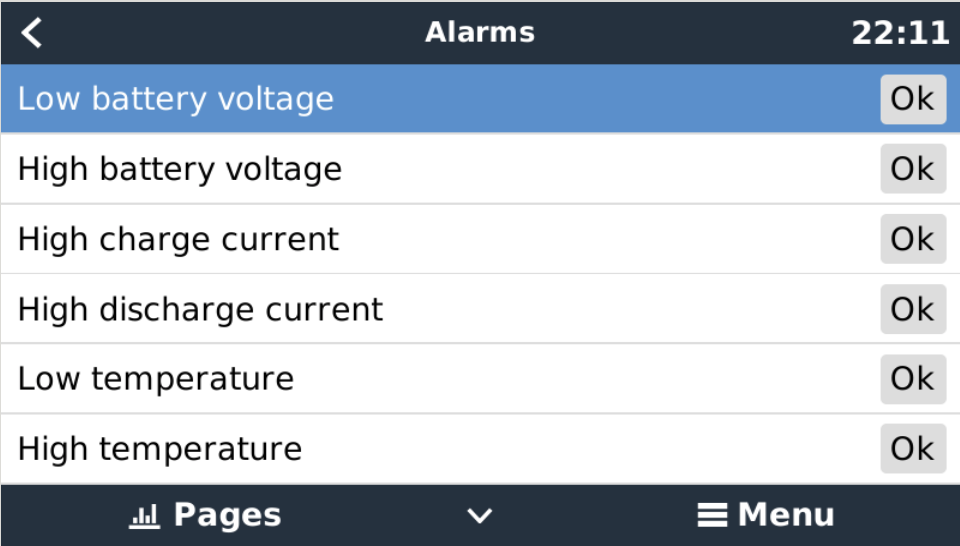 It's just that while the batteries are new and the cells are not balanced enough, the Victron system interprets this as a "high voltage" of the entire battery and starts to warn about it in this way. After a couple of weeks or months, these notifications stop. A similar problem is described here using Pylontech batteries as an example: https://www.victronenergy.com/live/battery_compatibility:pylontech_phantom#high_voltage_warning_or_alarm_shown_on_battery_status

But lately (and only on some new systems) we are facing more serious errors 2 and 29 on MPPT RS charge controllers. I can't figure out why this only happens on some systems even though the settings we make are the same. I know that the PV voltage at the input of the MPPT RS should not exceed 8 times the float voltage of the battery, and we are far from that limit. Firmwares on all devices in the system are updated to the latest versions, as well as Venus OS. DVCC is enabled.

On one of the systems there was error 29, I carefully checked all the settings and, not finding any deviations, left the system running in this state. As a result, this error stopped appearing after three weeks (screenshot 3).

A couple of days ago we started a new system with an RS controller and a BYD battery and I see errors 2 and 29 again (screenshot 4). When I look at the battery voltage charts in the "Advanced" section, I see perfectly normal values (screenshot 5), but when I go to the MPPT RS menu in the "Remote console" I see a very high battery voltage (screenshot 6). Where does it come from? This value conflicts with all settings. At the same time, there are no errors in the menu of the battery itself. Maybe there is some problem in communication between BYD equipment and Victron? 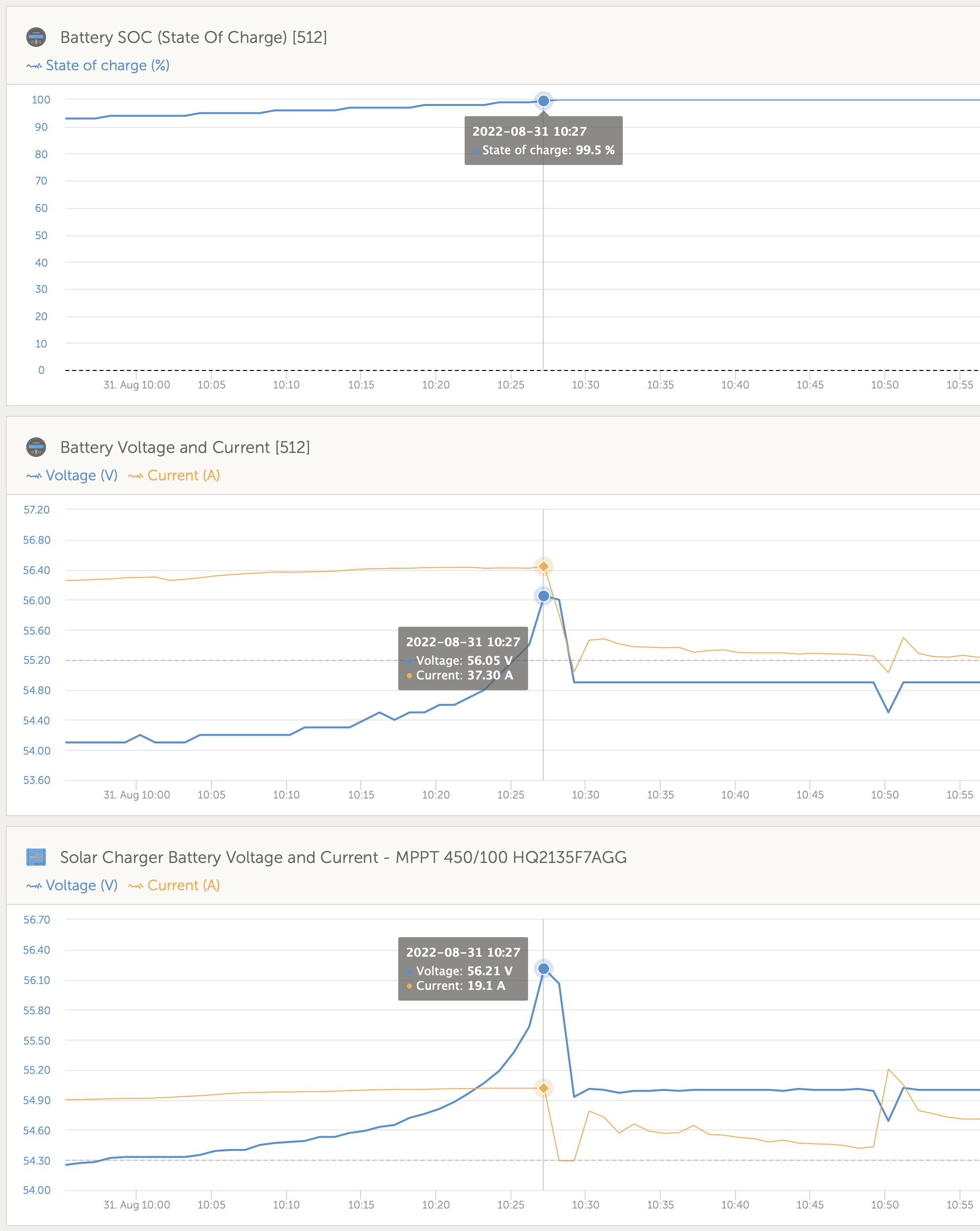 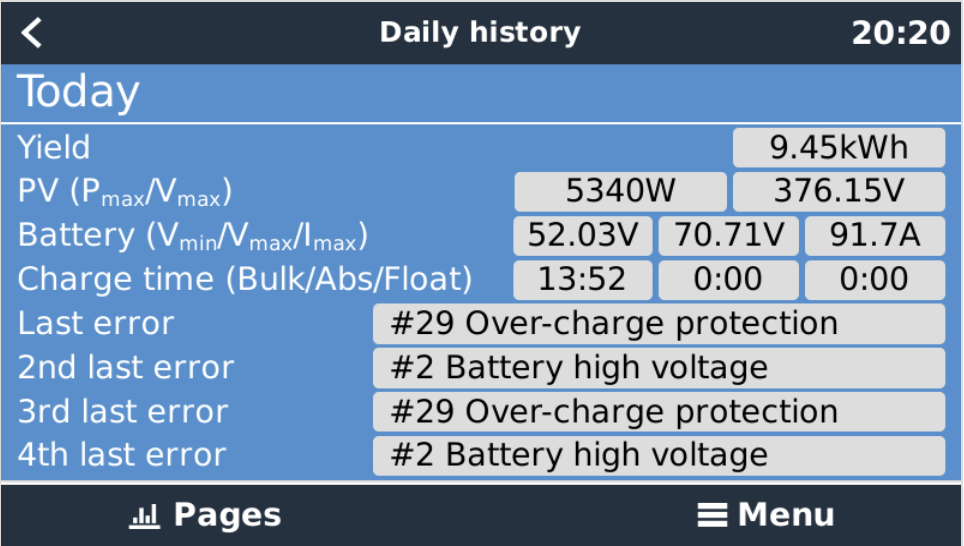 I understand that it is possible to limit the voltage in DVCC, but on most of our systems (with the same set of equipment and settings), there are no such problems. I don't want to do many individual settings for the same systems, it can be confusing.

I will be glad if Victron employees or installers who successfully coped with this problem answer.

You are not alone with this issue, there are several open reports.

@Alexandra is correct in that the issue is a high cell voltage in the BYD. The cells are not balancing/balanced correctly, and one or more cells is too close to it's shut down threshold, rather than all cells absorbing the load equally (within the threshold).

This event usually co-incides with a large solar production on a 100% full battery, and then a reasonably large load turning off. This causes a momentary overshoot in power in the system and in some cases, the battery to disconnect itself.

This then leads to further voltage overshoot on the Victron side, and potential shutdown and alarms of our equipment (such as the MPPT RS). This voltage spike can also lead to other issues with components - so it is quite important that we stop this occurring in the short term with the tools that we have.

As Victron has no control of the cell balancing inside the BYD, we can only control the overall current and voltage that is provided to the battery.

I have just updated the note in the BYD battery manual regarding this issue with more information and how you can better monitor the situation yourself; please give it a thorough read, try the suggestions and follow up to let us know of success or failure;

Thank you for the useful information. Eventually the battery balanced, but there was something strange and I want to tell you about it.

Almost immediately after I created this thread, the "minimum cell voltage" on the diagram turned into a flat line. Interestingly, in this case, the orange line periodically drops below the blue line, which is illogical.

I noticed that in one of the screenshots in the instructions to which you refer, a similar situation: 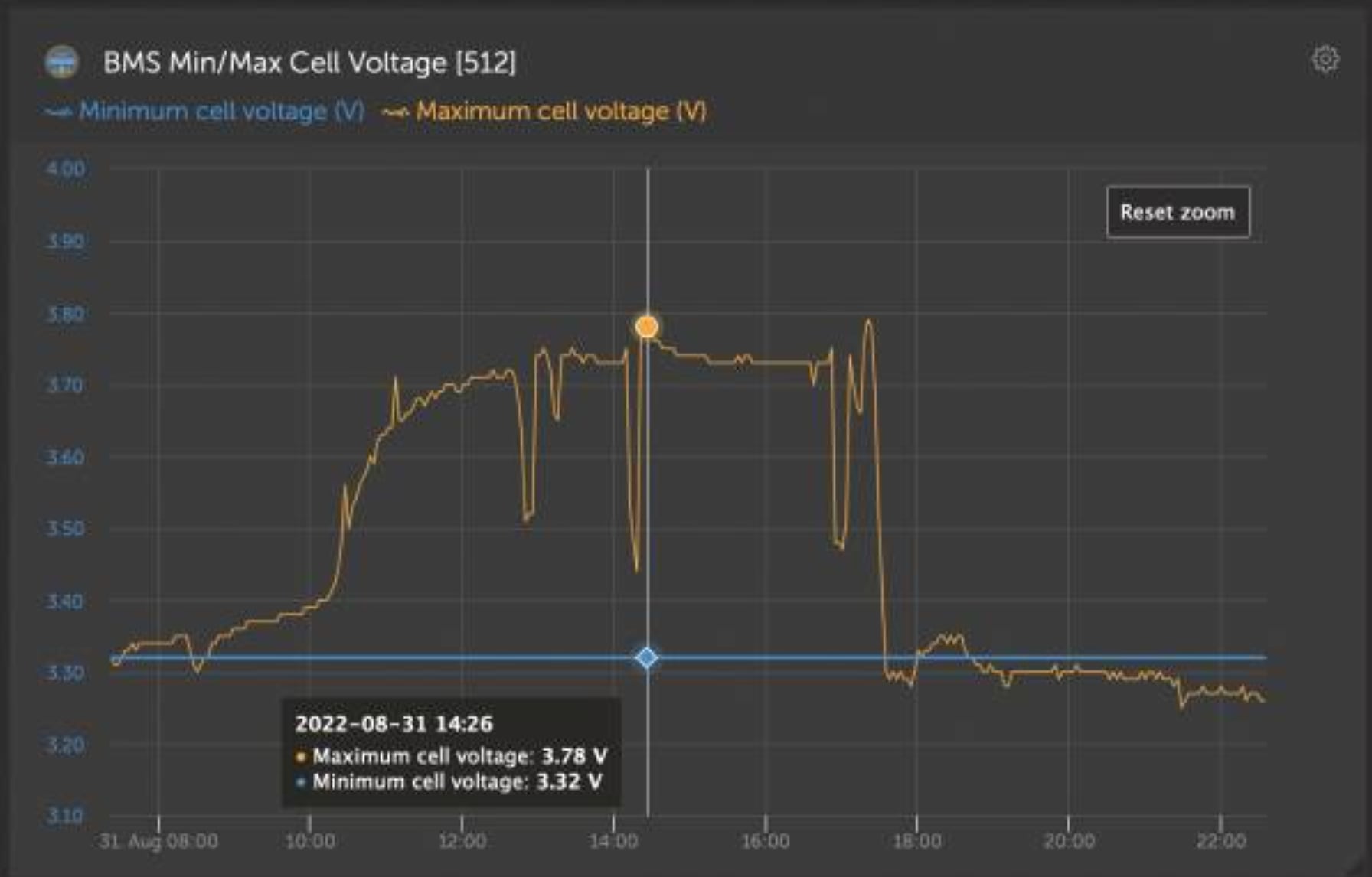 Screenshot from the Victron manual

There is even a phrase in this manual: "In an imbalanced battery installation, you can see the minimum cell voltage does not rise as much (if at all), compared to the maximum cell voltage."

As far as I understand, in reality the minimum cell voltage changes, but for some reason it is not visualized on the portal. I came to this conclusion because every time I clicked on "Redetect battery" in the Remote Console, this value changed once, after which it remained at the same level again: 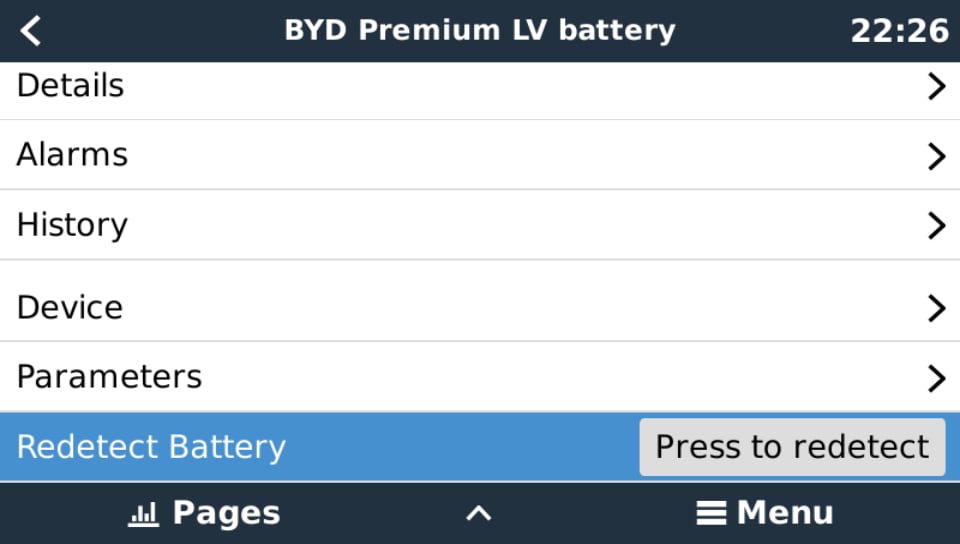 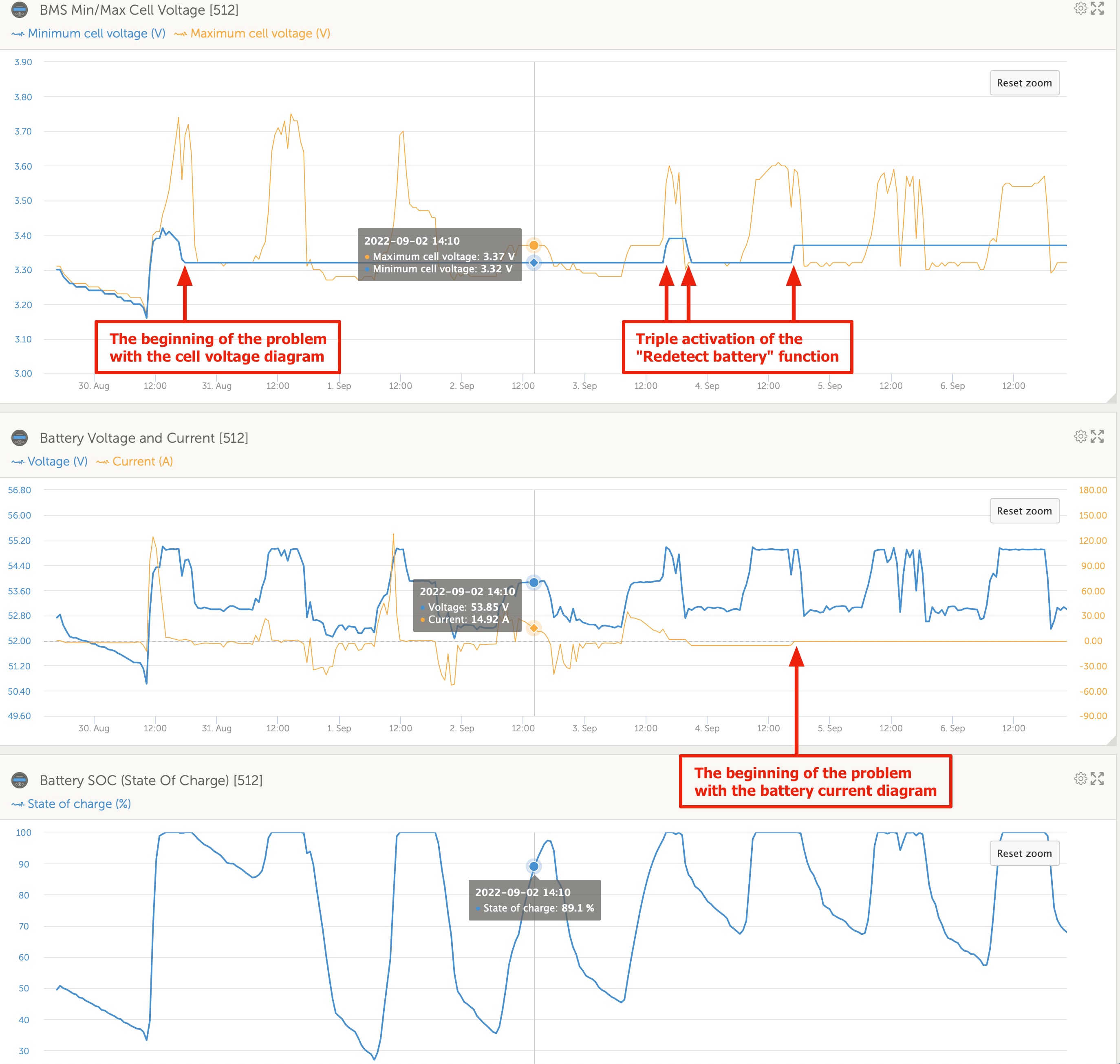 Also on the diagram you can see that after clicking on "Redetect battery" the battery current also turned into a straight line, although the battery was actually charging and discharging.

The problem was solved by itself on September 13. Interestingly, this coincided with the release of the new Venus OS 2.90: https://www.victronenergy.com/blog/2022/09/13/venus-os-v2-90-generator-controls-in-vrm-remote-ve-can-rv-c-venus-os-large-and-more/ 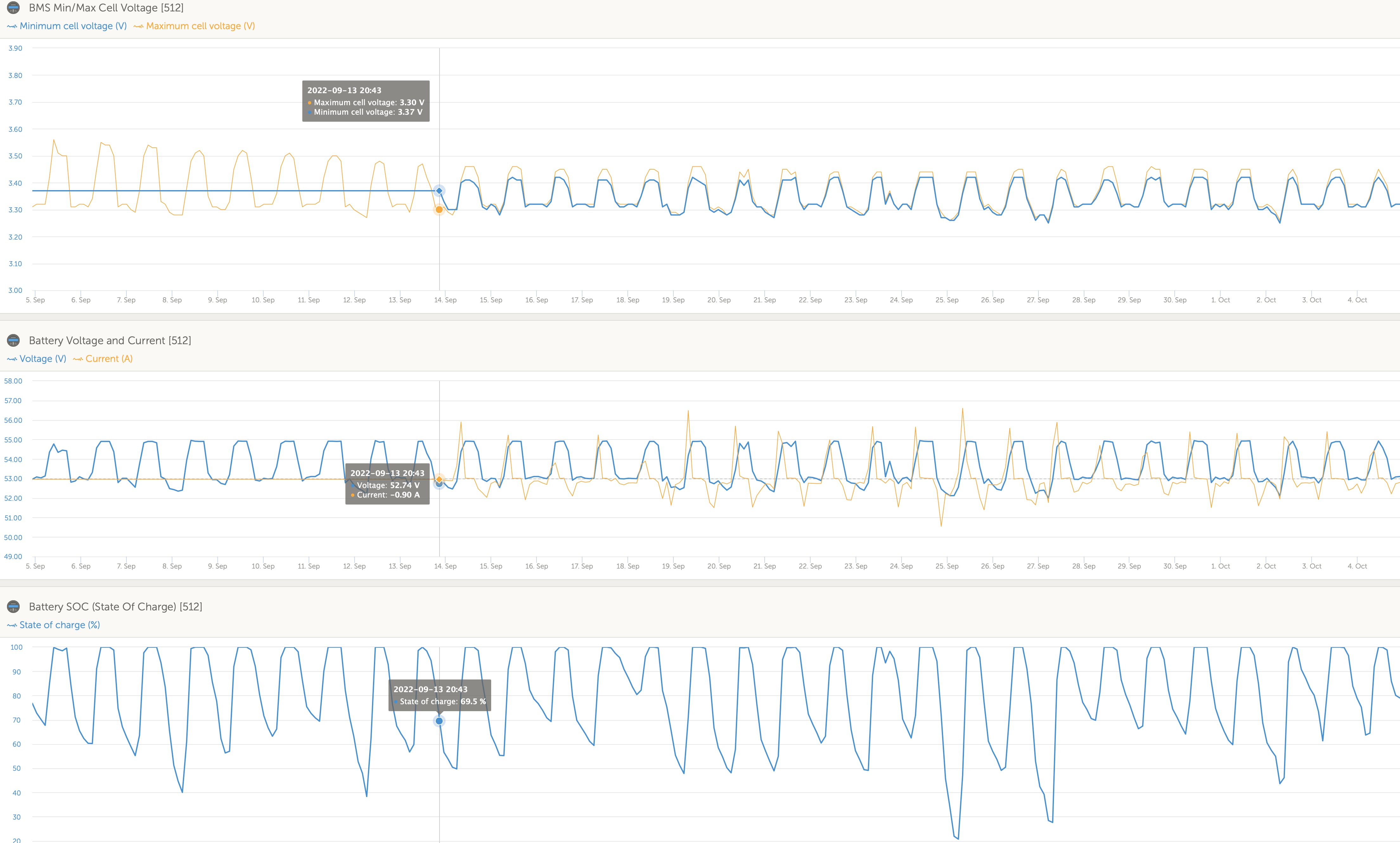 We haven't seen this on other systems, so most likely it wasn't the Venus OS update itself that helped, but rebooting the GX device after the update. Although it seems to me that I rebooted the GX when the problem occurred, but now I don’t remember exactly. However, the problem is gone and the battery is now well balanced.

Perhaps to get the battery (or communication between BYD and Victron) out of this state, we need to "Redetect battery" and reboot the GX device.

In your advanced widget, set up your bms lowest and highest cell voltage widget. You will see it is the cell balancing that causes the voltage rise.

Either lower the charge current (to give more time for balancing, cap the charge but mostly BYD needs to revisit their balancing.

This is mostly out of Victron control as the system is BMS managed.

I have found the issue mainly pops up on systems which keep their batteries at 100% for periods of time. So while the system spec is the same, the system useage is definitely not.

this usually happens in an off-grid system, it is difficult to keep the batteries in the voltage range where it does the (initial) balancing. In an on-grid system, the solution is to select 'keep batteries charged' until the battery is balanced (as described in our manual).

There are multiple ways of getting the battery balanced sooner:

-balance them in the workshop before installing at the site
-when MPPT's are available: don't turn on the inverters, and let the MPPT's provide a stable charge voltage until balanced
-when a generator is present: use this to charge until balanced (but it can take a while, depending o.a. on how long the batteries were stored, etc)

manual on this topic: