Hi all, completely new here to apologies if this is in the wrong place, or the wrong platform altogether -please move or redirect if either are the case!

I am planning a whole-house ESS/UPS comprising 8x Pylontech US3000C for 26.99kWh useable storage. Initially this will mainly be used to time-shift Octopus Agile/Intelligent/Go, but in future will also have PV input (size TBD). House has a 100A DNO fuse, UK 1P 240V/50Hz nominal.

Where I am struggling is:

Off the back of this, I'll be looking at the PV side to understand crossover points as regards payback period etc. - but need.to.start somewhere!

Thanks for any help; happy to provide more detail if meeded

A 5000VA Multi has max 70A charging current, so you would need two of them.

This community is not the place for system designing. You should ask a local Victron installer/distributor (and buy the parts from him!).

Thanks for your help.

To assuage your evident concern; this isn't system designing. It's educating myself so I can have a properly informed conversation with a local distributor/installer

Given I'd need 134A charging current, surely the actual picture is - I can't charge that capacity in 4 hours, as I only have a max 100A supply. And that's making no allowance for other draw in those 4 hours either, like an EV

Edit: just checked the spec sheet, and the 5000VA multi can only pull 50A AC input current? So that's my cap per Multi per hour?

That 134A charge rate is battery current, not grid current.

Also, are you 100% certain that you have a 100A cutout in your service head?
My fuse holder has 100A written on the side of it, but when DNO pulled it the other day there is a 60A cartridge inside.

colinb wkirby ♦♦ · Jan 16 at 04:36 PM
Gotcha. Forgot about the different voltages on each side and that that obviously affects current!

Yes, definitely 100A. Tails are 25mm2, had the DNO out to upgrade from a museum-piece bitumen filled steel/iron box.

If you're on a 60A at the moment but have a smart meter, I would imagine your Tails are 16mm2. UKPN would let me up to 80A on that alone, in case that helps you out

I am on Octopus Go at the moment. Octopus had underestimated how popular their Go tariff would be and they are loosing out. I don't have an EV, so inline with their new T's&C's, they are going to take Go off me when my current contract ends. More on that later.
However, for now I'm on the 5p / 15p tariff, so I need to hammer it between 0030 and 0430.

I have a 3KVA MultiPlus which means I can charge my US3000C battery bank at ~1.8kW. I currently have four US3000C modules so the maximum charge capability is 148A or ~ 7.4kW.
In that golden 4 hour period I get around 7.2kWh from Octopus which is about 50% of my battery bank.
I also smash my water cylinder with both elements (5kW) during the magic window.
My main fuse is 60A, so I have to keep an eye on things.

My consumption off this system is about 8-10kWh each day, so the yield from Octopus is not enough. Solar in the middle of winter is woeful, maybe 1kWh on grim, grey days. This is where the additional capacity of the battery carries me through and then a nice day comes along with maybe 5kWh and start topping up again.
As summer approaches, I'll need less and less Octopus and so I'll start to limit the SOC that comes from the grid and leave more space for PV. In the peak of summer I may not end up using any Octopus at all perhaps even wasting unharvested PV energy if the battery fills up before the day is over.

As it stands, in the middle of winter, I'd need more grid charging power. I could add another MultiPlus in parallel and charge at 3.6kW which would easily fill my battery from empty inside the golden 4 hour window. In the summer I would not need so much charge power and perhaps none at all.

In a few months time, if I don't have an EV by then, Octopus is going to take Go off me. I'll probably have to move on to Agile. This might mean that would not need any more charging power because there may be more than four hours worth of cheap rates in a given day.
I still need to sort out my systems to interact with the Agile API, I'll probably use my HomeAssistant instance to read the API and then control the Victron system over Modbus.

Thanks for the extensive input. If you don't mind me asking, how big is your PV array?

I wasn't aware of the Octopus T&C change; will have to make sure the next car is an EV now then!

If you do end up on Agile, I'll be interested to hear how you get on with the automation - Home Assistant -> Modbus is where I'll end up too if I go down that route!

I currently have 4kWp of PV. I have a mix of East / West and mostly South.

HomeAssistant's Octopus configuration is in the early stages as I prepare for the inevitable. I have just got the Agile current price to work. 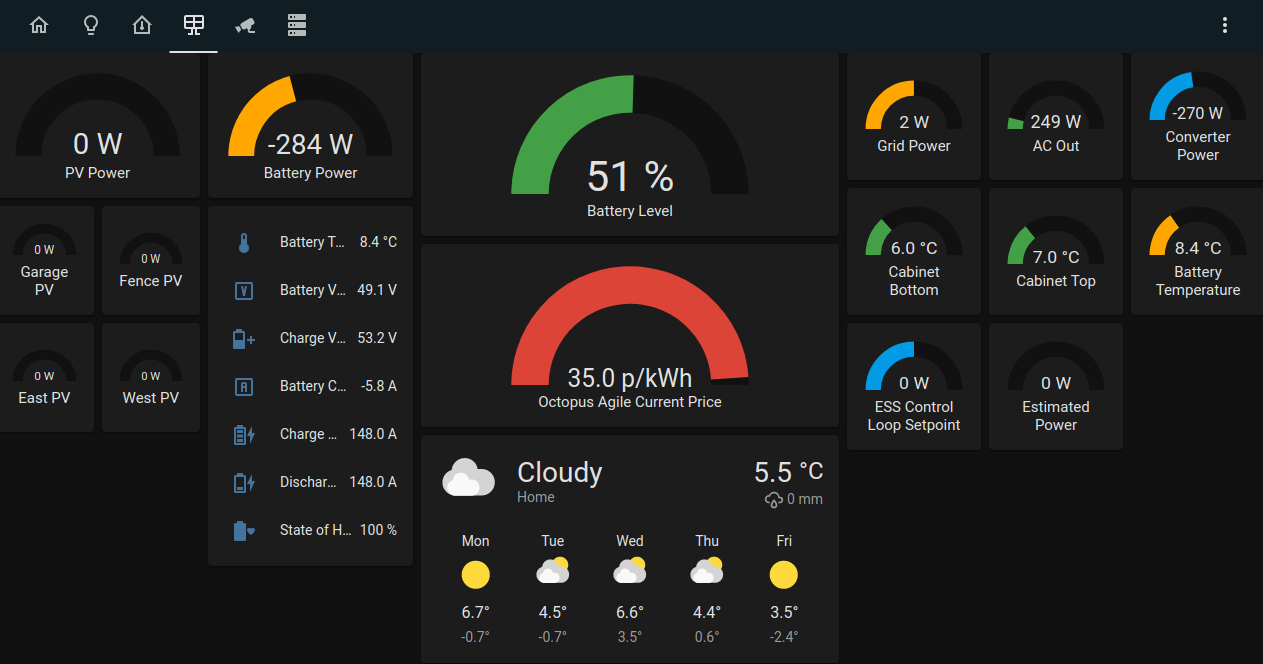 Let‘s estimate with a charging efficiency of 95% and a battery-voltage of around 52V (high SOC): a Multiplus 10000 will use about 7,7kW. This means you are using about 34A of grid current or about a third of your DNO fuse.

A charge point heavily depends on the amperage of the connected car. If you want to charge with (only) 16A there are still 50A left for appliances (at the time of charging car and batteries). With a 32A charge point you will have only 34A left - could become critical …

Personal opinion: I would not recommend to go above a Multiplus 10000 for charging from grid with an EV charge point in mind. If you want to go higher you have to implement dynamic management techniques.

colinb · Jan 16 at 05:28 PM
Thanks. I'll do as you essentially suggest, and work backwards from the 100A limit, thinking about which loads can/will be on simultaneously, and whether they're all going through the Multiplus or not. Good, as it forces me to think about what lives on the Critical Loads AC Out.

I'll also do a bit more thinking about introducing realism. e.g. Am I realistically likely to use full battery capacity daily? Or am I more likely to use more lke 50%, giving me a 2-day backup at normal usage, or more if I change behaviour on grid outage. If that's the case, then something like the 5000 or 8000 comes back onto the radar.

Much to mull over!

51 People are following this question.

Scheduled charging not working ESS System - it did.. now doesnt

Configuration of 2x Multiplus II 5KVA in parallel (single-phase) ESS system. 5KW appliance is only to be used on battery power when batteries are above 90% SOC and up to 2hrs before sunset.