Looking at options to build a system for a global boat using a 48V lithium storage system. Would like to keep the AC shore power in separate to enable global shore power capability that is frequency and voltage agnostic.

Looking at the Victron catalogue, I don't see any options to support 120V or ideally 120V/240V AC 48V battery charging.

Can you put any 24V Victron chargers in series (e.g. Skylla-IP65) in series to get 48V charging?

Any third party options that you can recommend? Prefer not to add additional weight, complexity and space with voltage or isolation transformers in the input side.

Hi there that could easily be achieved by a victron multiplus which would allow shore charging from a supply but would also have to match the inverter charger, eg 240v multiplus input and 120v input are better off being and I think come as two different units, victron probably also have a way to provide what you need I’m sure if you call them or an approved supplier will keep you correct. The multi or Quattro is purchased via the battery voltage you have so would be for example a multi 48/3000/120 would denote, 48v dc battery voltage, 3kva of power also including power assist feature, and 120 amps of current for charging the battery bank, please also ensure you get it setup correctly as lithium have a profile on Victron products. I hope this helps a bit thanks David

robin-wessel · Dec 02, 2021 at 11:51 PM
Thanks. Problem with using the built-in charger of the either the Multiplus or Quattro is that they are linked to the AC system. Requirement I have is to be able to charge with both 50Hz and 60HZ AC shore power. This won't work with the built-in charger.

Looking to build a "federated" system that allows me to charge from any source voltage and frequency and keep my AC system always at 60HZ 120/220V.

Hoping that Victron will mature their charger product line to include 48V options.

ddickov robin-wessel · Dec 03, 2021 at 11:49 AM
I was just thinking also the multi and Quattros can be changed for 50hz and 60hz also just incase that would help, other suggestion of 24v would allow a lot more options as mentioned thanks david
Share ·

We have a somewhat different approach we are going to employ on our 120/240V 60Hz American-standard boat (which will be domiciled in Australia).

The boat has an isolation transformer (240 to 240V, 50 or 60Hz). When on 50Hz shore power we will feed the output of the transformer to a Quattro 48/10000. That will charge the battery bank from 50Hz power. When on shore power it will pass 50Hz power through, and when off shore power, it will be set to invert to 50Hz 240V for any Australian-standard items we install in the future (e.g., maybe a dive compressor).

We will also have two paralleled Quattro 48/10000 units set for 240V 60Hz to power the existing boat stuff via the battery when we're on 50Hz power. American standard power will be re-routed from the isolation transformer to the 60Hz inverters by flipping a switch. These units will also be able to charge the battery from either of our 16kW 60Hz generators.

The one thing that is not covered is 120V 60Hz shore power. That is generally limited to 30A in the US, and for that will will probably install a smaller galvanically-isolated 48VDC charger, with a separate shore power inlet, but this is not a priority until we cruise to that area.

This may not be what you want, but let me ask, why 48V? Unless you are looking for a high power system like we want (and your comments about weight suggest otherwise), 24V should be fine. Then you have some really nice options, like the Mastervolt Chargemaster Plus series - up to 110A at 24V, universal input, galvanically isolated, and you can parallel them if you want more power.

robin-wessel · Dec 03, 2021 at 05:20 AM
Thanks for the feedback and wow that sounds like a huge system! This will be going into a fairly weight sensitive 45' Cat so designing a lightweight system is major priority. This makes the RS smart 48/6000 inverter very attractive at only 11Kg and a single box for both the solar MPPT and inverter. Don't need huge shore power capability since the plan is to install 2.4KW of solar and the A/C will be high efficiency inverter based units. Will have a dive compressor however.

Still debating 24V vs. 48V. 24V would be ultimately be easier since most of the DC loads are 24V so would eliminate the complexity and failure potential of high efficiency DC-DC converters.

The primary rationale for 48V is the availability of high performance alternators that have low RPM turn on thresholds and good efficiency. All of the 24V alternators I have found to date require cruise RPM to generate good charge rates and efficiency is not any better than 12V versions. A 48V alternator will generate 4KW at ~1,500 engine RPM with 60%+ efficiency resulting in less heat and fuel consumption.

kevgermany ♦♦ robin-wessel · Dec 03, 2021 at 08:37 AM
Have you looked at changing the gearing of the alternators? Smaller pulley on the alternator or larger on the engine will make the alternator turn faster. Need to keep alternator revs in spec at full engine revs, but may work.
Share ·

Here are some alternator power plots I generated when I was looking at a similar system. With big alternators you can need to pull back the current at idle to reduce engine load, hence the Wakespeed WS500. 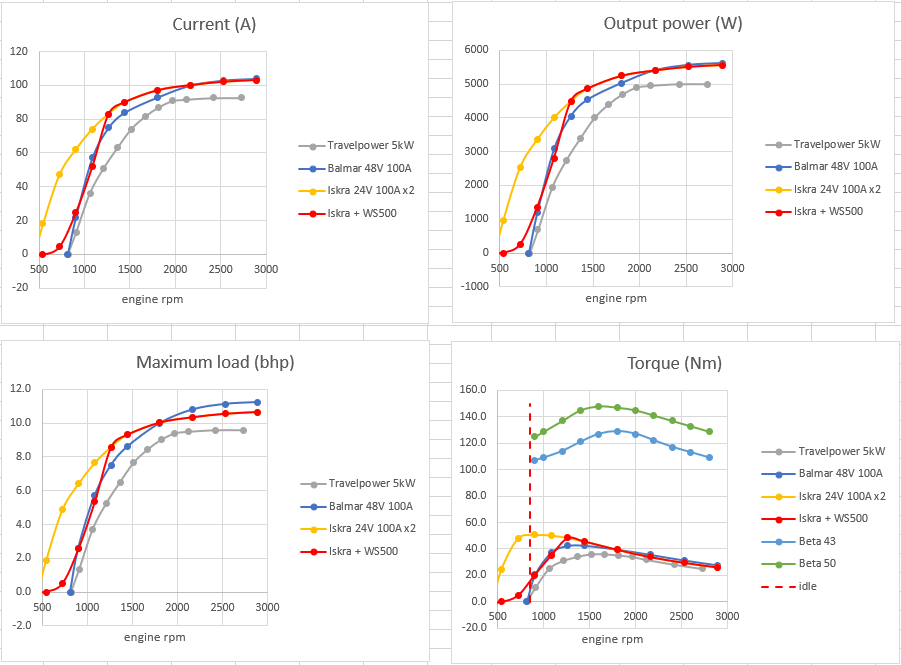 They look more like the 48V 60A curves in shape.

And your curves seem to show the 24V alternators as equivalent in performance.

In theory, you should be able to achieve essentially the same charge curve from 24V and 48V alternators in the same frame, with a little more efficiency from the 48V unit due to reduced diode losses, just by changing the number of turns (and wire size) in the stator.

how to connect a dc dc charger and a MPPT?