I have attempted to explain my predicament below. Apologies for the long story, but struggled to abbreviate and still ensure I cover everything I have seen thus far.

I have installed approximately 20kW battery power and 13kWp between the three MPPT's.

The system seems to record incorrect data and this causes an erratic response. The EM24 seems accurate. I have a 6kW 3 phase element in the one geyser and can see when this comes on that the EM24 shows an accurate reflection of this power as can be seen in the picture below.

The concern is that AC Consumption (Total load calculated by the system) now spikes to almost 40 kW on L1 as well as on the other phases although little less. The grid meter is actually seeing that we feeding back into the grid on L1 and L2 although L3 remain stable (L3 now correctly replaced with the power from the batteries). Also the Multiplus AC Output power becomes extremely erratic, which I would believe is only the supply to the essential side and should not reflect the power drawn by the element.

Then as soon as the batteries go back to charging the system become stable again with the Grid meter showing the drawn power.

I have disabled the Grid feed-in (Both AC and DC) settings last night which seemed to have improved the situation, but it was still not stable this morning when the geyser switched on. Below is a graph from 3am to 6am

At 4am the geyser switched on and the noise started as the batteries still had capacity. Just before 5am the batteries got to minimum SOC (35%) and it started pulling from the grid. After noticing this I decided at 5am to change the Multiphase regulation back to all phases. This improved these peaks and dips seen on the both sets of graphs, but the issue still remain when the batteries are being utilized.

If anyone can give me some advice as to what to look at to improve stability during these discharging cycles of the batteries. Once I have this improved I would go back to Individualphase regulation to ensure I remain net positive on each phase as I have three single phase meters for my 3ph supply that I need to manage.

Thanks for the comment. The system was installed by an accredited installer less than a month ago. I assumed all software was updated to the latest. My mistake.

The Cerbo GX I have updated to the latest and all the PV Chargers (MPPT's) are up to date. The actual Multiplus-II GX units are however not. They are still on 478, but it seems I need a cable to update them. I have ordered the MK3 cable and will get this updated when it arrive. Will do a follow-up post once I have completed this part of the process.

Thanks for pointing it out. Another lesson to never assume the professionals has done their job correctly.

To be fare the 481 software is very new 478 was the latest a few weeks ago, So as 478 is on the unit then I suspect he has updated it to the latest at the time,

Its quite important that you have the multis all on the LATEST firmware 481 at this time. as You dont mention that in your brief I do not know if the below will help

I have seen this sort of issue happening on earlier firmware versions on my system. now this may not fix your issue but its a place to start from

Upgraded the software last night and went through the full configuration process to ensure the settings are correct. Found some discrepancies between the inverters, but got that all now aligned and believe corrected.

Below I have inserted the current response and I am still concerned with what I see on Inverters L1 and L2 when the system started using the batteries to supply the non-essential loads.

The inverters are now all upgraded to the latest software version and L3 is not doing too badly, but definitely not as bad as what I see on L1 and L2..

It seems that the inverters are just reacting too aggressively attempt to supplement the load on the non-essential side, which the grid meter then see being dumped back to the grid. It would then see this change on the grid meter and then try to back-off again possibly over reacting.

Not sure if there is some parameters that I can look at adjusting to have the inverter slowing down the reaction time to what is seen on the grid meter. This could help to reduce this overshoot and possibly reduce the amount that the system push back to the grid during these erratic times. 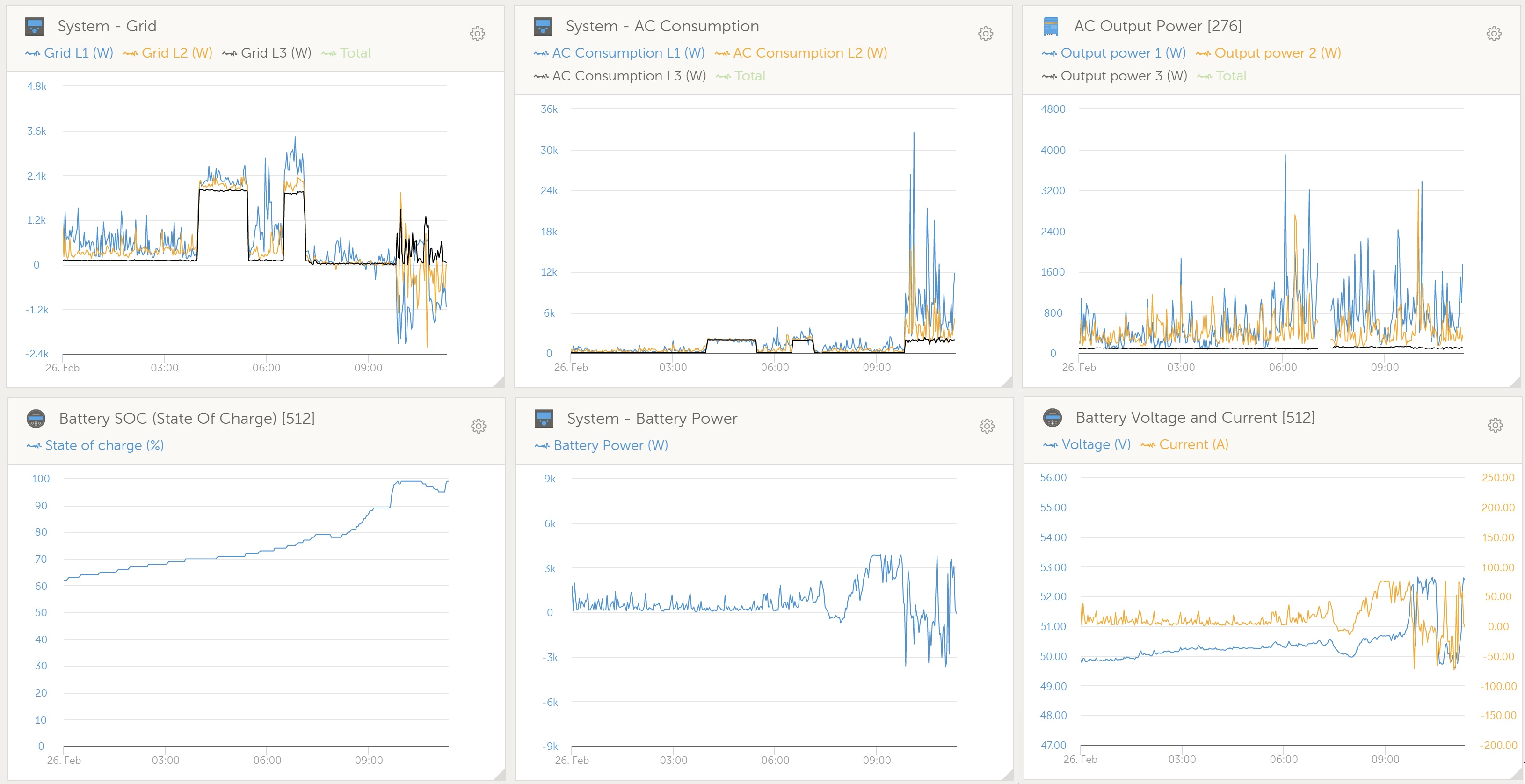 Thanks again for the contribution and looking forward to the comments.

22 People are following this question.

Your evaluation before installation

System Power displayed on GX does not balance