I am wondering that ESS feature does not properly respect the deactivated "Grid feed-in" option.
In following screenshots you can see that the grid power flow deviates roughly between -2.000W and +2.000W, although it is not expected to feed-in anything.
Since I am not allowed to feed into the grid, I am forced to move away from ESS to actually deprecated HUB-2 application.

I would highly appreciate, if Victron could consider 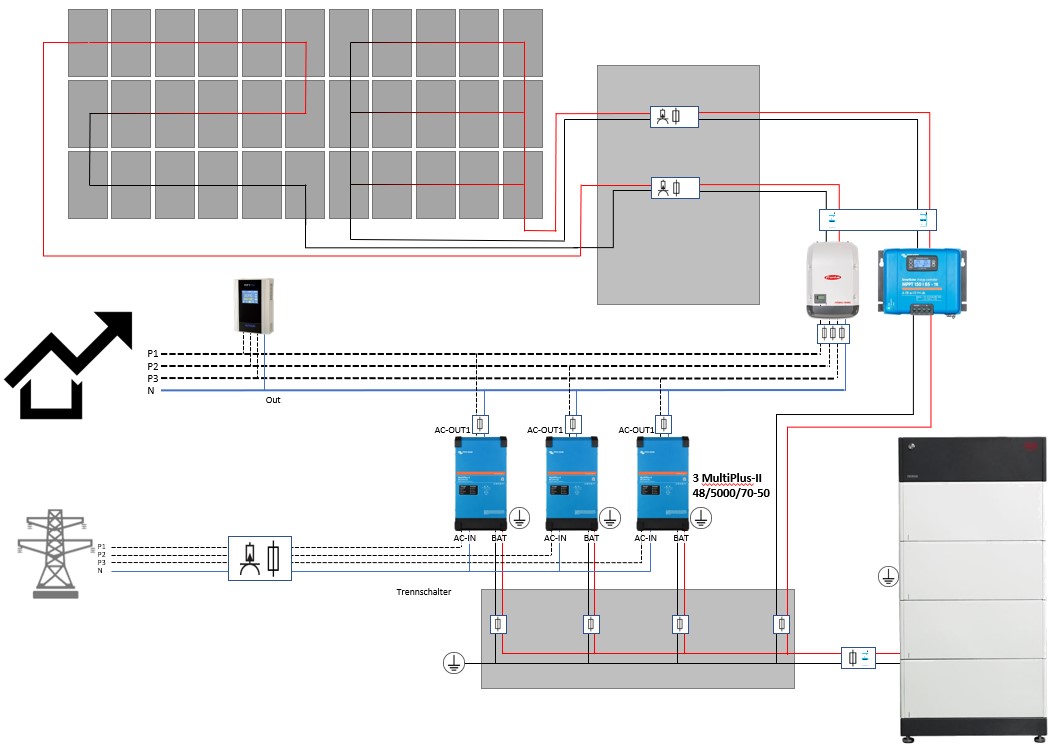 Can you outline more detailed what you mean with "the grid power flow deviates roughly between -2.000W and +2.000W" please? it is just short term fluctuation or more constant? If it is short term than I would think it is just a normal behavior when heavy loads are discharged. At least this is it my case. But in my case I only see peaks for some hundred Watts, But my installation is single phase 5K.

The "Feed-in limiting active = No" in your Grid feed in menu.

this indicates - "firmware requirement; the Data export; or the Sunspec Model type settings are incorrect."

Can you please post screen shots of the following configuration screens of your Fronius Inverter from your system? 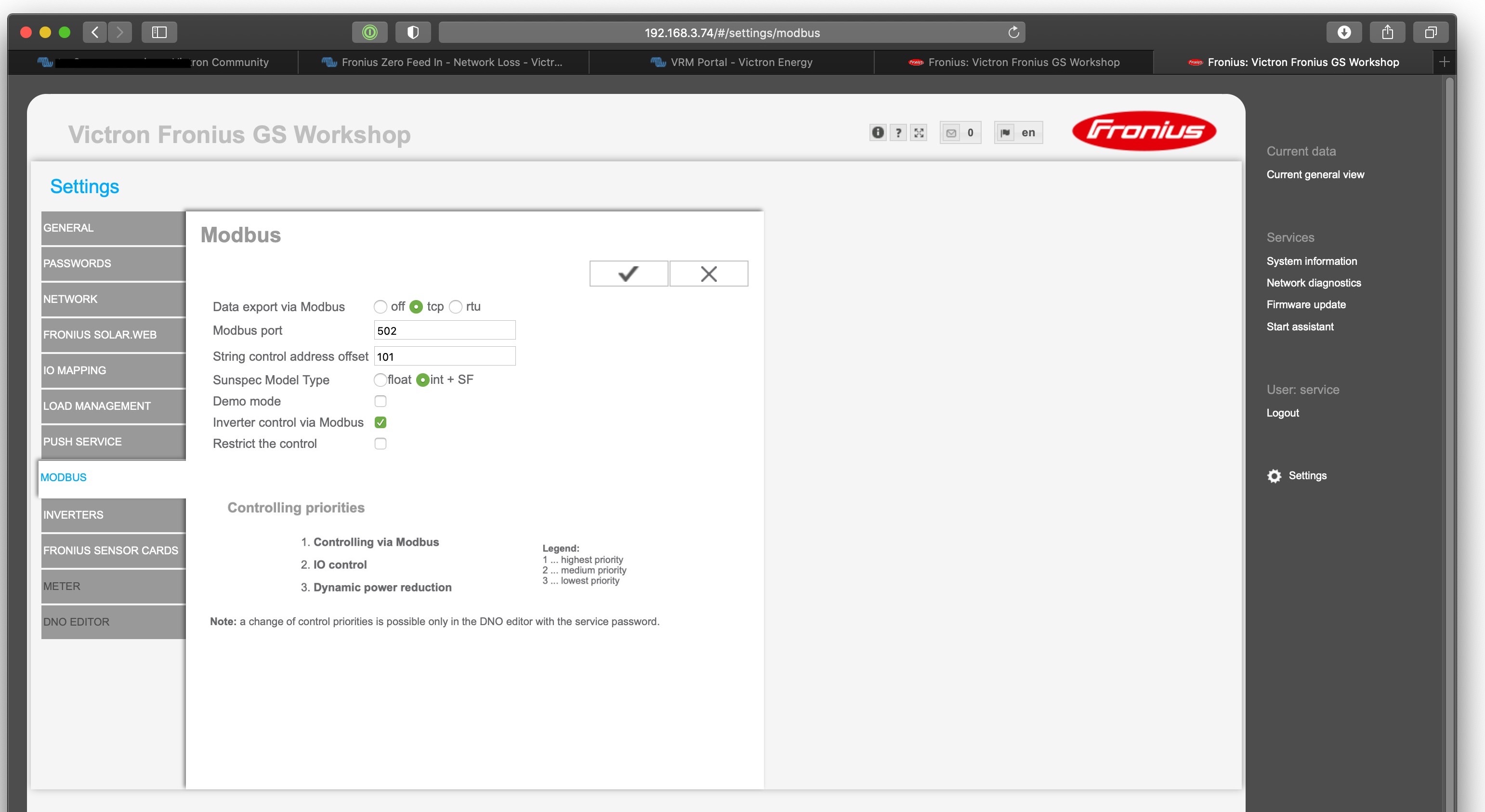 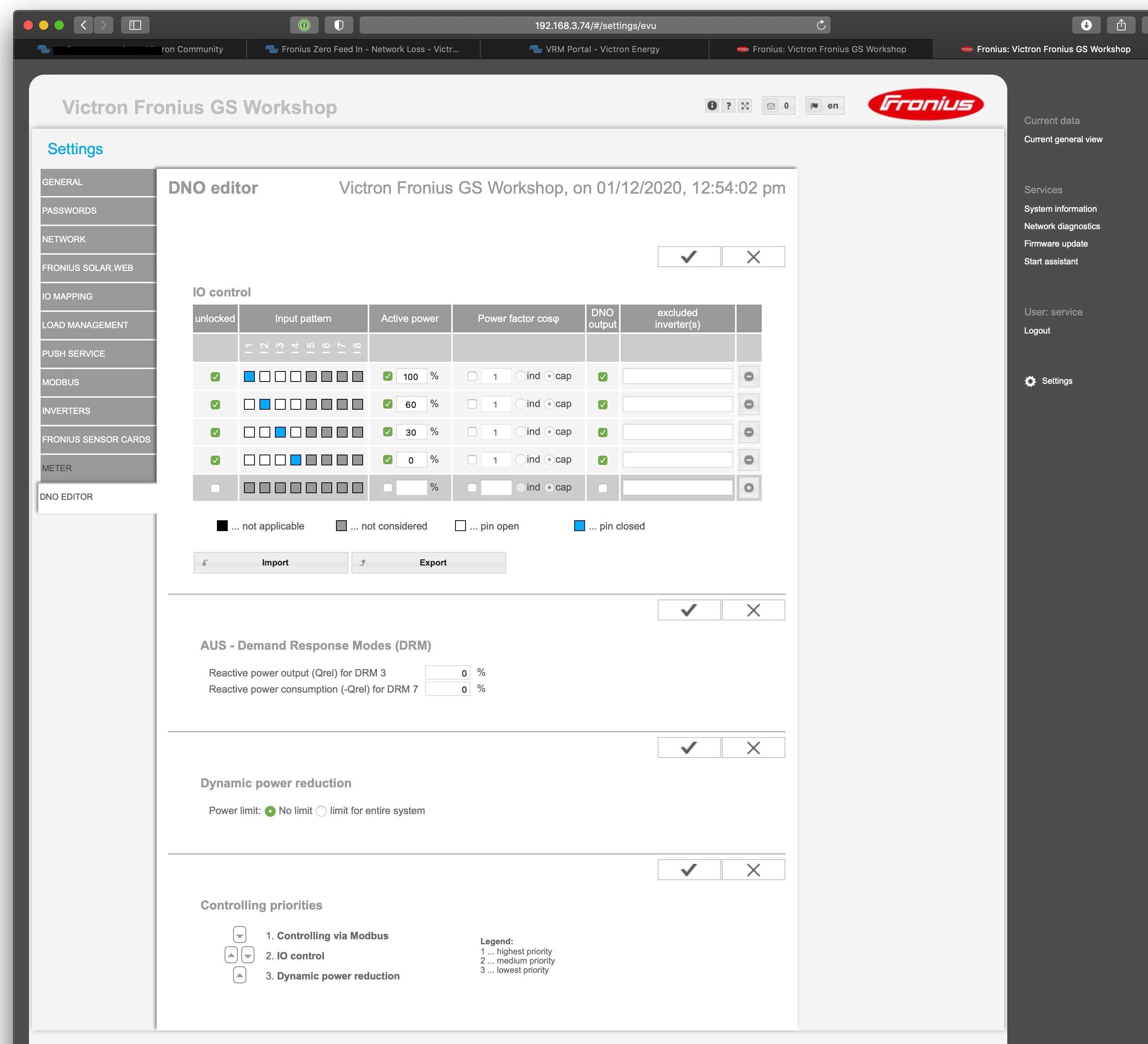 Hi Guy,
Thanks a lot for your reply.

Firmware is on latest status (see overview in main article) and configuration was also checked by our distributor. As you can see our from screenshots below, our configuration is identical to your samples. sunspec communication is shown by GX.

In our configuration the Fronius device gets definitely throttled by GX (not by frequency limitation), which indicates that Modbus connectivity should definitely active (please refer to the mentioned throttling issue below).

The "Feed-in limiting active = No" might be related to the circumstance that I extracted the screenshot during night hours, when Fronius is on error status anyway due to low power. Tomorrow there is sunshine announced. I am gonna to provide another screenshot, when there is sufficient power generation.

Since 2 weeks we are also elaborating with the GX-beta versions. Also there is not a real essential difference.

In the meantime I evaluated log data by VRM and collected more evidence. I will exemplify my findings on this specific issue by an additional response in this post.

Be aware that the Fronius device gets also heavily throttled although battery is not fully loaded and max allowed charging current is much higher that that level, what PV can provide. Please see my separate post, where I have provided already a lot of background analysis about the route cause of the throttling issue. 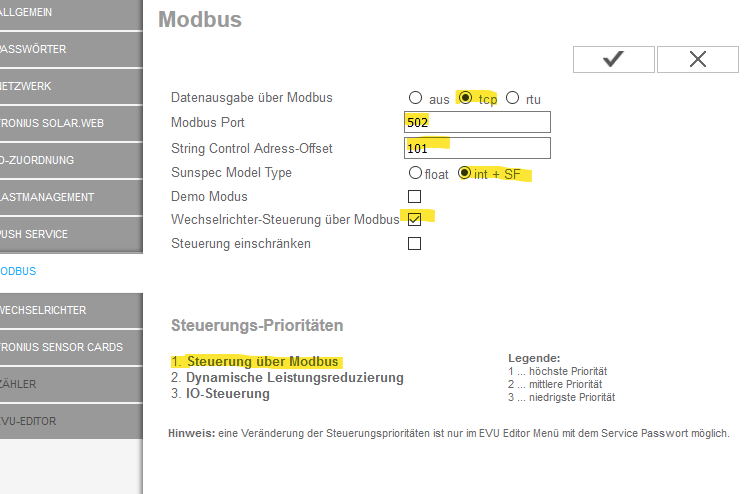 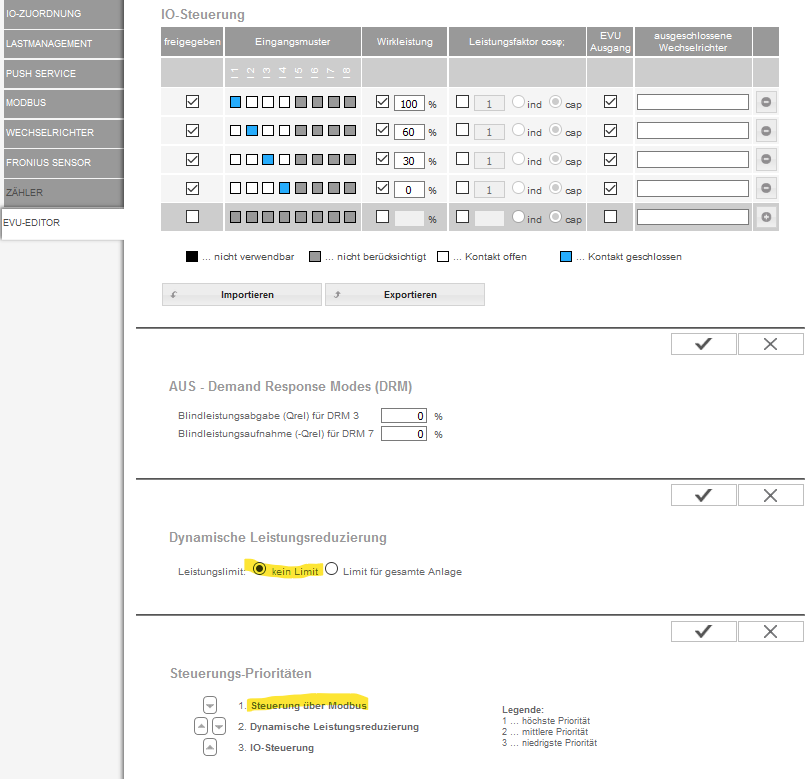 Finding 1
The 3-phase fronius symo produces nearly same energy level on all 3-phase at the same time. This leads to the circumstance that on that phase, where energy is consumed, the energy production nearly levels out.
On the remaininig phases there is energy overflow, which is then reverted into grid (please also refer to findings 3 and4).
Following table exemplifies the behaviour theoretically.

Update 25.12.2020
Yesterday we had after 2 weeks clouds, fog and rain a short sunshine.
Interestingly I observed a quite identical pattern that I exemplified theoretically before. 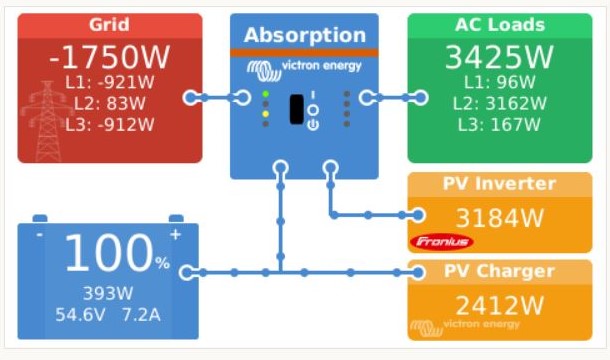 Update 26.12.2020
Under certain conditions engery is retrieved from battery in order to cover gap that cannot provided by PV. So far, so good. In case there is an unbalanced load on different phases, battery power is used to compensate the loaded phases. That phase with idle consumption however feeds power in grid. 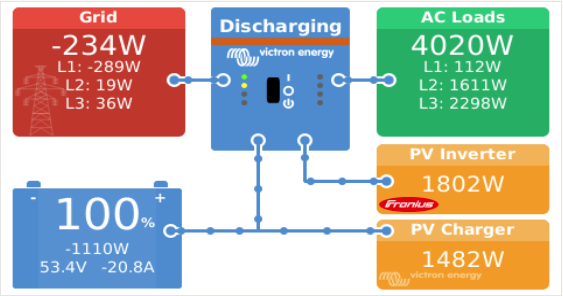 Finding 2
During a normal day the MultiPlus environment feeds in curently min 5% of total produced solar energy (extracted from solar menu in VRM), although zero-feed-in is configured. 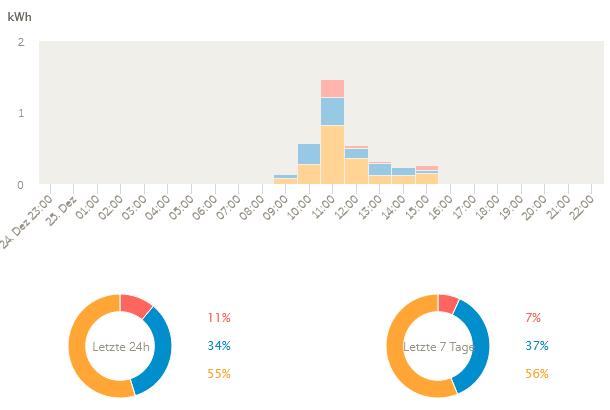 Finding 3
Overflow energy is on relevant phases is not directed into battery, although SOC was <60% and charge limit was of 243A at that moment. I validated by charging batteries via grid: batteries at that stage accept min 190A charging current, so nearly full MultiPlus-II capacity of 3x70A=210A.
So there can be no argument that batteries accept not more power at that moment.

Finding 4
Although also "Multiphase regulation" is set to "Indivdual phase" energy is not redirectey from the MultiPlus with energy overflow via DC to another one. I even observed scenarios, where energy was consumed from battery to cover the requirement on one phase, whereas power was reverted into grid on other phases in parallel.
Interesting observations:

I don't care about the efficiency loss like that feature is described in manual. I prefer that that feature would work ;-(

This issue seems to impact other users

Finding 5
As more frequent the energy consumption changes and as higher the different peaks get, as heavier the feed-in exceeds.
In the yellow-marked area of the diagram below there was a quite low power consumption with low peaks. During that time also energy was also fed in, but much less. After the yellow area cooking was started with essentiell load difference between single phases and therefore much more energy flew into grid.
Note: The energy level in this diagram is currently quite low, since weather condition in winter was not ideal. 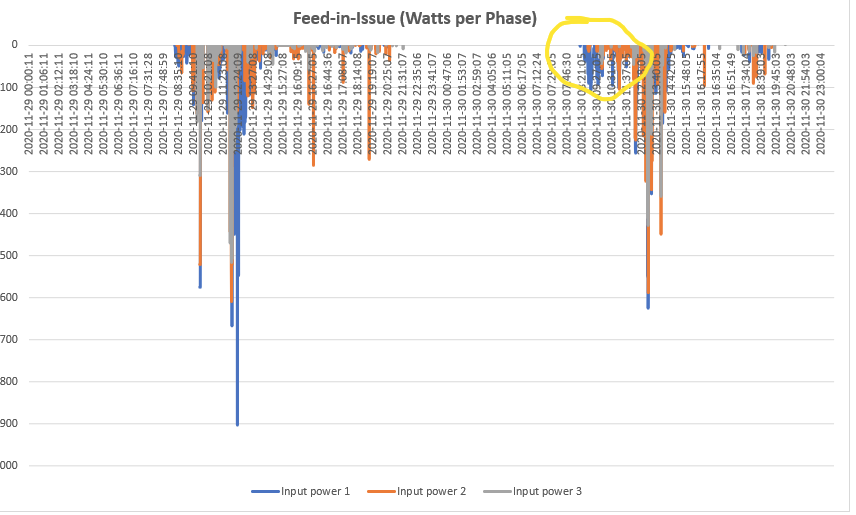 Finding 6
When I deactivate fronius and run MPPT only , there is nearly no feed-in also during peak changes.

Important Note
The fronius feed-in is not an isolated issue. There is a tremendous parallel problem with power throttling as well. So there is a gliding path, when energy is fed in and when power is throttled in case energy is actually required e.g. to load the battery (see here).

Thanks a lot for your reply.
Of course we set up the configuration as required. It was even validated by our Victron distributor.

I published the config in Guy's reply below with some screenshots (maybe you have to click on comments-link to open it). Please comment, if you could discover any wrong setting. 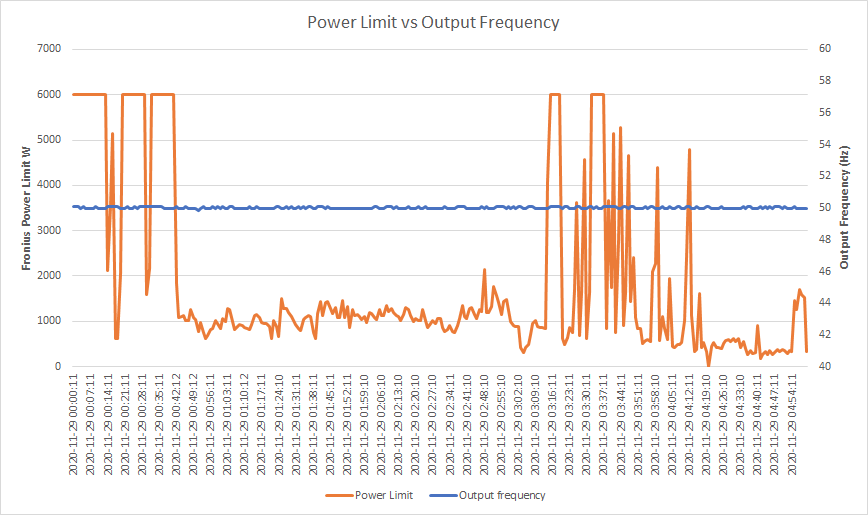 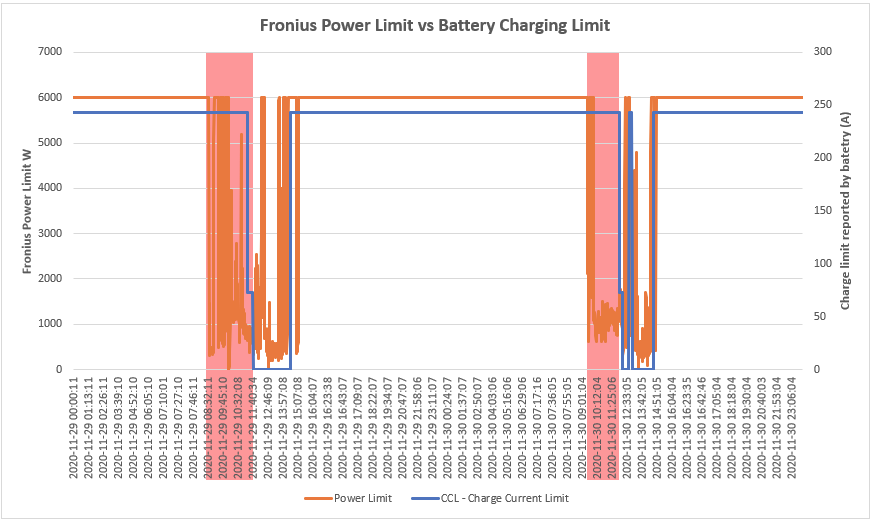 Just one questions. I had many issues until I managed to make my system working. Is modbus TCP enabled from services inside gx?

Hi @Mihaimicu,
Yes, Modbus on GX is activated. However this activation is requried to retrieve information from GX. According to my perception this setting is not required so that GX can control the Fronius inverter via Modbus.