I'm running an ESS system and noticed that the startup of large AC loads are being powered from the battery / inverter when on scheduled charge. The scenario is as follows:

Under these conditions, my understanding is that the system should be relying on the grid to power the loads (with minor background losses). What I'm seeing is that the batteries are used to support the startup of large loads while the grid contribution is slowly ramped up over a few seconds. In the screenshot below, we were using a clothes iron that switched on and off frequently. This resulted in large loads being pulled from the battery each time the element switched on and corresponding charges pushed to the battery when the load switched off. Any way to change the behaviour and get the system to rely on the grid in this scenrio? 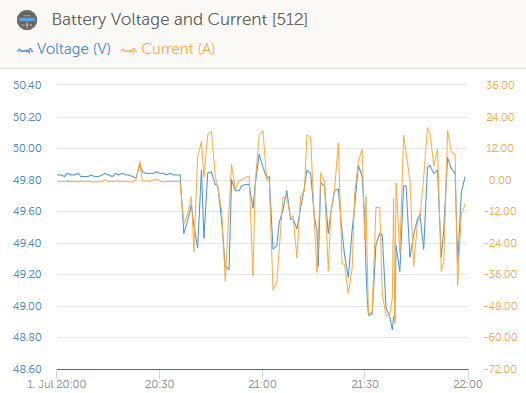 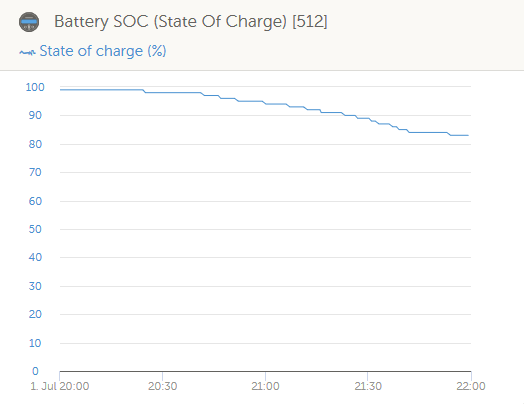 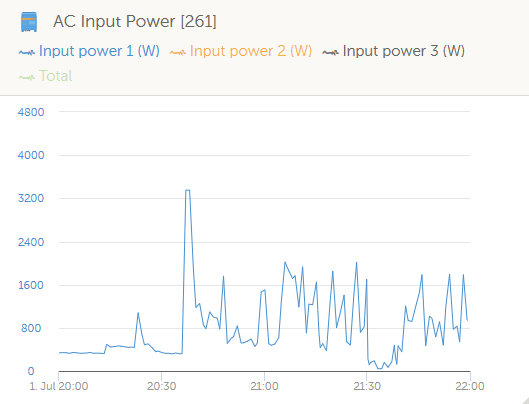 Here is less extreme example where a kettle is switched on and pulls 14A from the battery during a scheduled charge period: 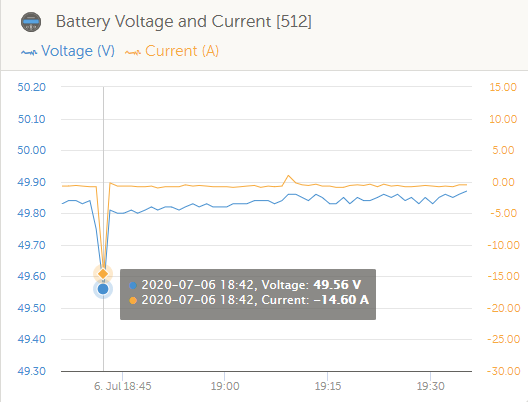 I have the same problem, i don't want any battery drain during scheduled charging, but seeing massive drain when load is high, only way to stop it is to set the multiplus as "charge only", but that not a real solution. 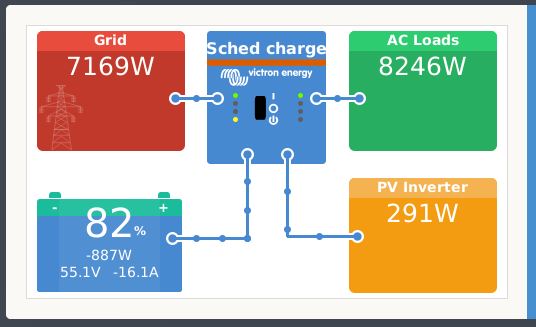 @kempza I noticed the same behaviour, apparently this is normal behaviour to "buffer" loads which in many respects makes sense.

I am working with support to understand this a bit more, as on the current assistants/firmware I was able to overload the inverter (and more recently trigger low battery alarms) which seems too aggressive with "buffering" AC loads from battery.

On my 3kVA multiplus 2 it would be happy to draw just shy of 2600W and is too relaxed (in my opinion) in feeding in grid power.

I feel we need more control over this behaviour.

What I also noticed was this is more problematic when there is little to no PV, once this disappears the steady load on the DC bus also seems way higher with ESS optimised mode, and the batteries slowly leak charge. If you have larger loads that regularly kick in and out, this buffering seems to take a much higher toll on the batteries and they can run down a fair bit faster, the inverter doesn't seem to compensate enough for this process and fails to maintain battery charge.

I like to use the top 20% or so of my batteries for night usage but by the time the system cuts over to batteries, it has already lost 2-3%.

I'm hoping the support guys can provide some better insight and hopefully assistance in making this process work better.

Hi did you get anywhere on this one with support?

I have the same issue, not really an issue till recently when i installed a Electric Car charger.

I take advantage of cheap electricity for 7 hours a night (Economy 7). If the weather looks bad for "tomorrow" I'll charge my 6.5KW battery to 80% as soon as the cheap tariff kicks in, then an hour before it ends i'll top up to 95% so i can run the house for a most of the day off the battery even if i get very little solar. To do this i run two timed schedules, and it's been working perfectly.

To charge the car i also take advantage of the Economy 7, but what i'm finding the car pulls 7 KW, the multiplus 2 tries to help out even though it set to scheduled charge and i end up with a very low battery charge in the morning.

What i really want is for the scheduled charges to mean just that, to charge only and not care what i'm pull from the grid as over night it can be 11KW plus.

@nickdb any news from support? My car continues to drain my ESS battery when I just want it charging from the grid? I don't want to see any drain during scheduled charge, winder if you have the settings for this?

The base product doesn't have the logic, or automation built in that would allow for control over this.

I manually either lower inverter limits (under ESS) or change modes to "keep batteries charged".

There is no way to adjust these behaviours either through the native schedulers or by linking performance to PV generation, as an example.

There was a suggestion in the modifications forum to implement node red and try use those workflows for manipulating inverter performance.

I haven't had chance to try and it doesn't seem like something someone without a good IT background should attempt.

Frustrating, I charged my car the other night and ended up with a fully discharged battery in the morning, not what you want from scheduled charger :(. Will see if I can work out a way to control it some how with my home automation system.

@k2aab I have fiddled with home assistant, there are no modbus registers for ESS inverter limit or ESS mode, so I can't find a way to change those by time of day. AC load etc.

Qauttro with grid and no batteries connected