Having Load Drop Issue with Smartsolar 100/20

System with both fans has been operating fine for the last week, both fans functioning.

Today I was checking the system and I could start one Fan via thermostat, but when I go to start the 2nd Fan, the first cuts out and 2nd won't start. So I look in VictronConnect and see the Load voltage getting pulled-down or dropped when I switch-in the 2nd Fan(confirmed with DVM).

These fans are slow-start "Brushless DC" (3-phase controller built-in motor), and draw just 500mA when starting, then ramp to 4.5A slowly, over about 20-25 seconds. Both Fans running full speed hover right around 9.5-10 Amps total. I'm calling these a Capacitive Load, not an Inductive Load, since the motors have controllers inside and thus Caps.

VictronConnect shows me that lowest battery voltage this week was 25.6V, and Spec for SmartSolar 100/20 shows Load disconnect down at 23.5V, so it seems the Load output should not be getting disconnected??

I suspect the Load voltage IS spiking below 23.5V briefly and causing this??

I don't want to have to take an O-Scope in there to troubleshoot ;)

Also, I did connect Fans to Battery directly, w/o Load port, and they both start just fine.

Thinking now of adding a Choke on the fan DC line and a capacitor at the Load output to moderate possible spike??

Or abandon Load port and use a relay direct from Battery and a Smart Disconnect, though I wanted this system to remain very simple.

By the way, it doesn't matter which fan I start first, same behaviour. 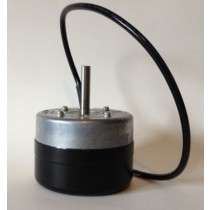