I'm having a hard time figuring out the right settings for my Victron Orion to charge my Victron 200Ah smart lithium battery. I have a 2013 Sprinter with a smart alternator.

I have read that the Sprinter keeps the battery charged around 80% (12.4 volt) to leave enough room to charge while braking (the voltage jumps to 14+ volts).

When I switch on the lights while charging the voltage jumps up to around 13.3 volts and remains there, it seems that the ECU decides to let the alternator work harder when the lights are switched on.

While driving without charging and with the lights switched off the voltage is around 12.6/12.7.

One option would be to disable the 'engine shutdown detection' and simply use the inut voltage lockout at around 12.3. This would mean that I will be emptying the starter battery while the engine is switched of. A bit crude..

Another option would be a switch or a D+ cable but I actually want to use the 'engine shutdown defection' but it doesn't seem to work for me.

Another option would be to use the default smart alternator settings in the Victron app and switch on my lights when I want to charge.

Any suggestions? Is this a common issue or am I doing something wrong?

You have investigated thoroughly. I think disabling engine detection and wiring from D+ to the H pin is the right way to go.

yourithie commented · Aug 16 at 07:20 AM
The amps will still be pulled from the alternator while driving and charging since the voltage is higher than the starter battery, right? E.g. when the battery has a voltage of 12.4 and the alternator delivers 12.6/12.7.
0 Likes 0 ·

yourithie kevgermany ♦♦ commented · Aug 16 at 08:57 AM
Do you know if this behaviour is unique to Sprinters?

On which vehicles does the setting alternator type: 'smart alterator' under 'engine shutdown detection' work?

These vehicles must then always supply 13.3 volts while driving.

kevgermany ♦♦ yourithie commented · Oct 01 at 06:19 AM
Sorry, missed this. There are quite a few similar questions here for other makes as well. My gut feel is that for some vehicles, LH wiring is best.
0 Likes 0 ·

I am having a similar issue with my 2020 Ford Transit. The Smart Alternator can reduce the voltage to very near the engine off voltage (around 12.4 volts on my Transit). I think (can anyone confirm) that my issue may be that I have the Input Voltage Lockout set too high. I currently have the Engine Voltage Lock set one tenth of a volt above the Engine Off voltage (12.5 V). My thought here was that this is how I protect the Vehicle Battery. I may be confused about the purpose of the Engine Lock Out compared to Engine Shutdown Detection. I understand that the Orion will turn off charging 10 seconds out of every 60 seconds to look at the Engine Shut Down Voltage (without a load), and that Input Lock Out is an instantaneous thing, But both of these algorithm features seem to be trying to do the same thing. Protect the Vehicle Battery. I have seen some recommendations to lower the Engine Voltage Lock Out to around 10.5 volts (ie significantly below resting/engine off voltage). I am concerned that this may not protect the Vehicle Battery, but perhaps the Engine Shutdown will do that. Anyone out there understand this?

The Victron Documents have a nice GRAPH showing what all the various voltages are doing during rest, start up, and operation, and this graph clearly shows the Input Voltage Lock Out below the resting/Engine Off voltage......So this is very likely my issue, but can someone explain why the Lock out would be so low and how that protects the battery? 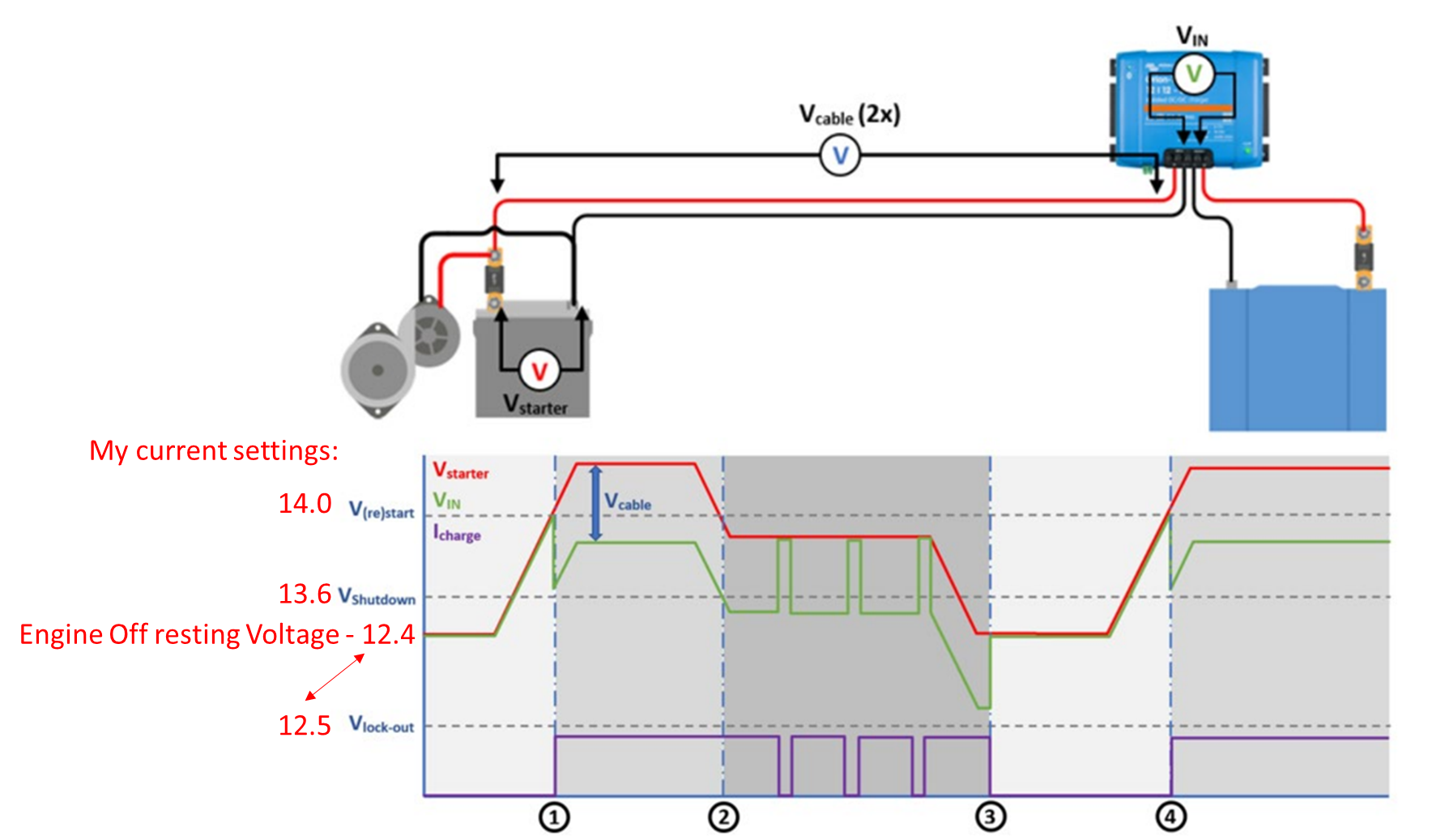 Which document did the drawing come from?

You can find it in several documents on the Victron Orion Product Page. The Manual, and the Engine-on Detection set-up. Here is a link to the Orion Manual:

kevgermany ♦♦ John Wilson commented · Oct 02 at 05:39 AM
Thanks, I've been looking at the pdf manuals.The diagram needs updating, the alternator to Orion feed should be fused.


Setting input voltage lock out so low will not protect the battery.

40 People are following this question.

Orion TR Smart - with or without Cyrix??

Can a Blue Smart Charger trigger an Orion DC-DC charger to charge a secondary bank?