With the help given here I have now taken the plunge and connected my Cerbo GX , Multiplus and Old style Blue Solar Charge Controller . Everything seems to be functioning as it should but there's still a few things I would like to clarify . Attached a screenshot of the VRM at 8.45am today .

Where does VRM get its voltage and other Data from . Cerbo GX , Charge Controler or Multiplus , all are connected to the Busbar .

The Voltage shown on the screen is the same as battery voltage but the voltage measured at its input terminals is always 0.15v higher in the same way my Morningstar Controller was , while the voltage shown on VRM is slightly lower . I have come to accept that small variations are to be expected however I cant understand why a voltage on Charge controller input terminals can be higher than battery voltage .

What does the PV charger show 349 watts but batteries only charging at 159 watts .

What do the readings displayed in the MPPT box on VRM refer to .

Why does the Alarm section on VRM advanced show lots of alarms for L1 Overload when the highest the Multiplus 1200 has outputted is 500 watts , mostly far less when alarm is shown . Battery voltages have ben fine so it cant have anything to do with them either .

What is Charging Temperature , its Higher than the Battery Temperature so where does the Data come from , I only have the one Temperature sensor and it runs from the Negative post on my Battery bank to the Charge Controller .

Is it possible to get a cumulative figure for total AC output either in Amps or Watts . I used to Zero my previous Charge Controller and Inverter and they would display Amp-hours/Watts which I found useful as I would compare them at the end of each 24 hour cycle . I think Yield is what the Charge Controller produces although only for the current and previouse day but I cant see anything for the Multiplus .

What is Battery power shown in Watts , how can the equipment possibly know what it is when it only has voltage readings .

Sorry to ask so many questions but I was given the Charger and want to make sure I understand everything and can spot any problems if its not working as it should . 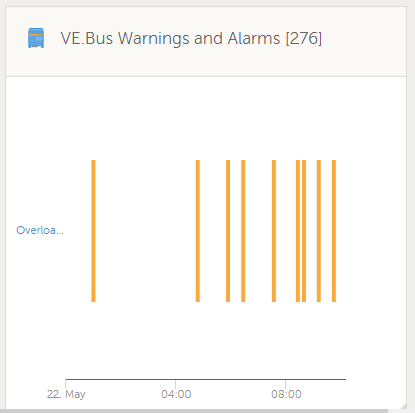 Alot going on in your post. So I have picked one or two at a time.

If you dont have a BMV in the system, the battery watts is a calculated amount that is usually fairly close to what is going there but definitely not as accurate. You are correct it only reads voltage.

The mppt will have a higher potential at its terminals as it will try to provide a more ready power source to your loads. Rather thab battery and grid. So being a volt or two higher makes this possible.

I expect if you add up the power consumption of the mppt, cerbo and multiplus you will find close to 20W there. With some variation for loses for heat etc.

At the bottom of the dashboard page you will find the options to see several graphs.

One of them will show you what power is drawn from grid and what it was used for. Loads battery charging etc.

Alexandra , thank you , thats 3 more things i have learned today .

Dont have a BMS and stil really dont understand where VRM calculate my battery Watts from , it must have some information to use other than voltage .

The terminal voltages makes sense now , i had assumed it would be the same as the battery as they are both connected to the same bus bar .

The calculation you showed also makes perfect sense and explains where the loss is going .

I have an off grid system but the figures i was hoping to see each day are where you said they would be , input and output so easy to see at a glance how system is performing .

Thank you for taking the time to reply .

There is some free training available on professional.victronenergy.com for users like yourself who want to learn how to drive and understand their systems better.

DVCC (in the Cerbo manual) could sort your V and T issues too. Check it out - a great feature.

Your overload warnings are probably real. Detected by the Multi and passed on to VRM. I've seen this on my 5kVA, and it was found to be spiking from a water pump starting (even though the reported duration may be longer). Replaced the start capacitor and that fixed it. So sometimes these annoyances may be telling you something..

Thanks JohnC , i have read al the manuals but cant find references for the questions i still have . DVCC wont work on the MPPT 150/70 CAN which i have , would have been ideal if it did as i need a temperature sensor on the Multiplus and the MPPT plus a sense wire on the MPPT .

The Alarms aren't attributed to anything , the previous Charge Controler never showed any . The only equipment i have that could cause a spike can only be either the Fridge or the Freezer s tonight i will turn them both off and see whja happens .

Why are there two widgets with the same information , SYSTEM-AC CONSUMPTION and AC OUTPUT POWER , is one more accurate than the other or is it that one will give information at a certian event when the other wouldn't , if one is to be removed for simplicity which would be the less important one .

Still trying to understand SYSTEM BATTERY POWER , its in watts , my batteries are amp/hrs soi dont see any relevance .

The Alarm Widget showing something every 30 or 40 mins appears to be from fridge and freezer cutting in , its too fast to see anything on voltage or output but i left them both off last night and no alarms , this morning i turned one on and had the alarm recorded , turned it off and turned the other on and again had the alarm recorded again ..With my last charge controller i set it to do a log every second but i never got to see the actual spike , i would look through the log for the previous night and the voltage would never drop below 24.8 volts but when i did a summary the minimum voltage in the period would be recorded around 24.3 volts , leaving the fridge and the freezer off for the night and the minimum voltage would be around 24.8 and could be seen in the log .

The massive range of widgets is to cover the needs of complex systems and personal preferences. For you the data is probably identical, and the graphs the same. 'Ah' is a nominal battery rating, and pretty useless for power or energy flows (without a Voltage). You can actually have it though if you add a shunt monitor.

The Alarms have their own page on VRM. The status, like 'Warning' is listed, and even though yours might be just mS spikes, they may be listed as 20S to clear. This is from the Multi, and can't be adjusted, nor can the logs be deleted. Yours appear to be Overloads, nothing to do with V. And shouldn't hurt the Multi anyway. But now you know that your loads are actually exceeding the Multi's continuous rating, albeit briefly.

What is the maximum number of 300watts solar panels in series on a victron 250/100 Smartsolar Charge controller?