I have a Iveco Daily Euro5+ van with a smart alternator. I am using 2 x 30A Orion (non-isolated) to charge 2 x 200aH Victron lithium batteries… Or rather I am failing to charge the batteries.

The issue seems to be that the starter battery voltage goes very low for significant periods of time while the engine is running. Starter often sits at about 12v for several minutes and then occasionally goes up as far as 14v. End result is that the Orion seems to think that the engine is in shutdown mode the majority of the time and is completely useless for charging the batteries.

I used to have a Sterling 60A B2B charger that worked flawlessly (although it died due to the cooling fan getting dust in it and halting the fan) I had assumed that the Victron beasts would be at least as effective as the Sterling and not have the cooling fan issue.

I have already set Input lockout down to 11.8v off and 12.2v on….. makes little difference as the alternator is down at 12 v for longer than a minute and then the engine shutdown detection kicks in. If I change the engine shutdown too low then it simply won‘t detect a real shutdown.

Any suggestions? Is there a way to change the engine shutdown from a 1 minute timer to a 5 minute timer or some other solution?

At the moment I consider the Orions to be an expensive mistake.

If your engine starts the alternator would ramp up the voltage, this would signal the orion to start. See the link about shutdown detection.

Either your alternator is not man enough for the charge amps for the system plus charging 3 batteries (hence the low voltage in the system) or you have number of smaller issues making one big problem.

For example, a combination of a starter battery in poor condition and often the voltage drop over the wiring to the orions, making the voltage detection see a lower voltage.

Have you tried using a different alternator type to see if the situation changes? Or set your lockout voltage values. If you are using the smart alternator option in settings, then it should allow a lower voltage.

Delayed start voltage (Vstart(delay)): Smart alternators can generate a lower voltage when the engine is running, therefore a lower start level is necessary for these systems. To ensure that the starter battery is recharged after starting the engine, charging of the auxiliary battery is delayed during this condition. The energy used during starting must be replenished to ensure that the starter battery remains properly charged. Default: 13.3V (Smart Alternator) and 13.8 (Regular Alternator).

@Alexandra I think the alternator is man enough….. with the previous Sterling B2B it worked rapidly and flawlessly to charge our leisure batteries.

I have read Victron’s description of shutdown protection - there are two timers involved - the delayed START timer - which is user configurable - is there to ensure leisure battery charging is delayed until the vehicle battery has a chance to recover from starting the vehicle’s engine. No issue with this timer - I understand it’s purpose and value

The second timer is used to detect shutdown…. Victron seems to have hard coded this to be 1 minute. Victron assume that if the starter battery voltage is below the configurable Shutdown voltage for 1 minute then the engine is off. (During this minute charging will occur unless it goes below the Input Voltage Lock-out value in which case it will stop immediately.)

The issue I have is that the Iveco alternator seems to happily go below the shutdown voltage for 2-3 minutes despite the engine not being shut down. This means the Orion shuts down after 1 minute, then will wait for the duration of the START timer (default 2 mins) before attempting to charge again…. And will likely get shut down again in a short space of time after it wakes up. Hence the Orion is spending more time shut down than actually doings its job. 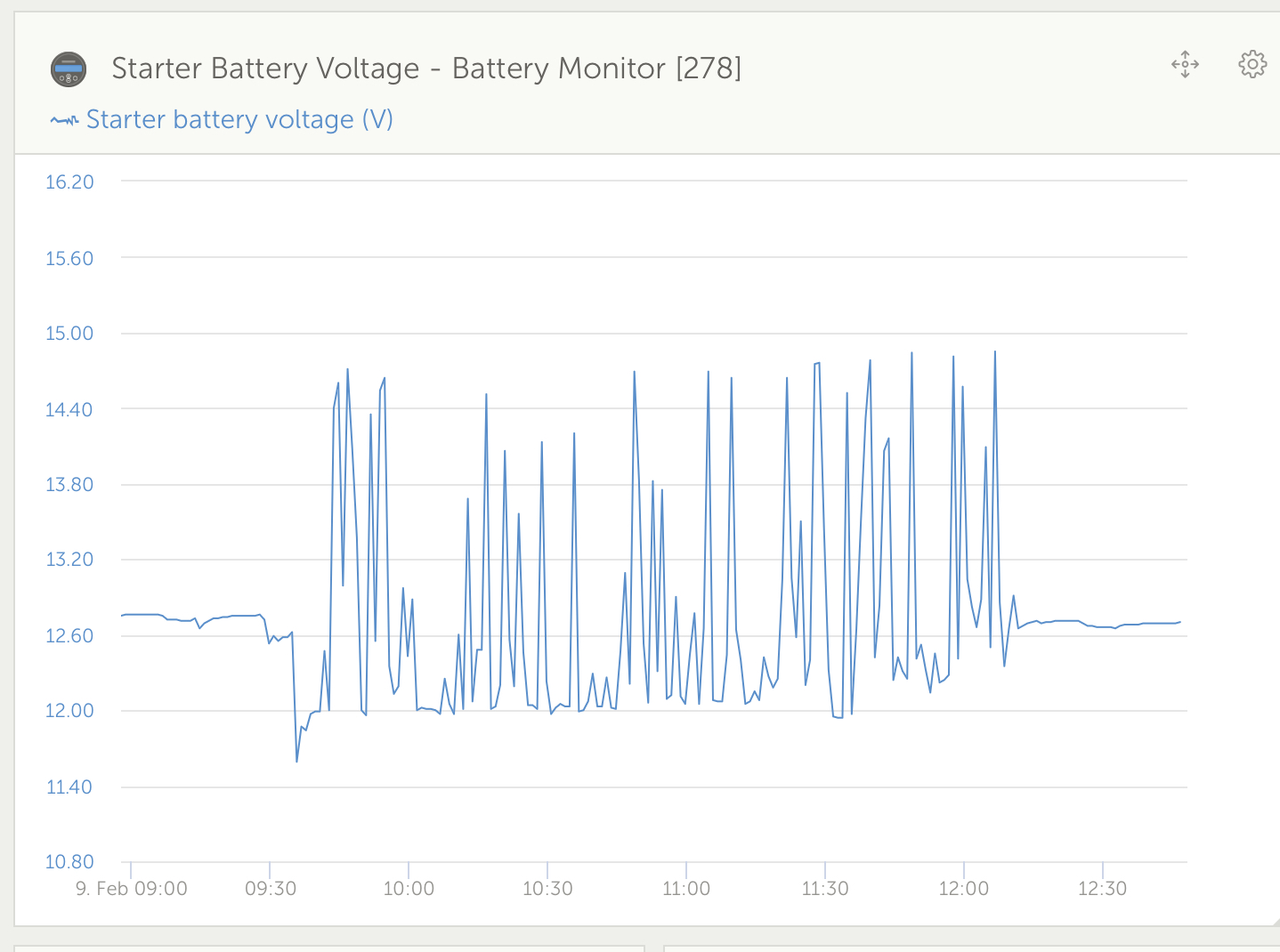 Here you can see the graph of the starter battery voltage on a journey today…..

Voltage when the engine is shut down at approx 12.75v….. but when running, too much time well below this which turns the Orion off

Suggestion and I'm interested cos I'm fitting one in my Iveco, but it's Euro IV.

Remove always on wire between L and H

Connect H to the switched feed on the ignition, should be easy to find as it will be there for the radio.

There are other ways around the issue.

@kevgermany / @Alexandra I was really really hoping for a solution that did not involve me running a wire from the ignition..... (several hours work & I am lazy)

Had really thought that Victron would have the means to have a product as clever as the Sterling B2B when it comes to engine shutdown detection.

@kevgermany - I had assumed that if I did run an ignition wire then I would simply turn off the engine detection mode, but your suggestion of simply putting ridiculously low shutdown voltages would still allow me to use the START timer to ensure the van battery would be recharged before the leisure batteries start charging, then have these charge continuously until float stage or the van ignition turned off

kevgermany ♦♦ · Feb 10 at 09:08 AM
Yes, you need to consider your usage, but Ivecos start really quickly, even at sub zero, so doesn't need long with a big fat alternator. The real issue is getting around the smart alternator, which is ECU controlled so varies from vehicle to vehicle depending on how the makers programmed it.

What you also need to watch is that if you're putting in silly values like I suggested, you don't end up with the charger running continuously.

@Daniël Boekel (Victron Energy Staff) Is running an ignition wire really the only viable solution here? Surely having a configurable timer against the Shutdown Voltage would be the sensible way to go on this ?

DC chargers/converters to charge lithium on boat and current

Can you mix Victron buck boost converters in parallel?