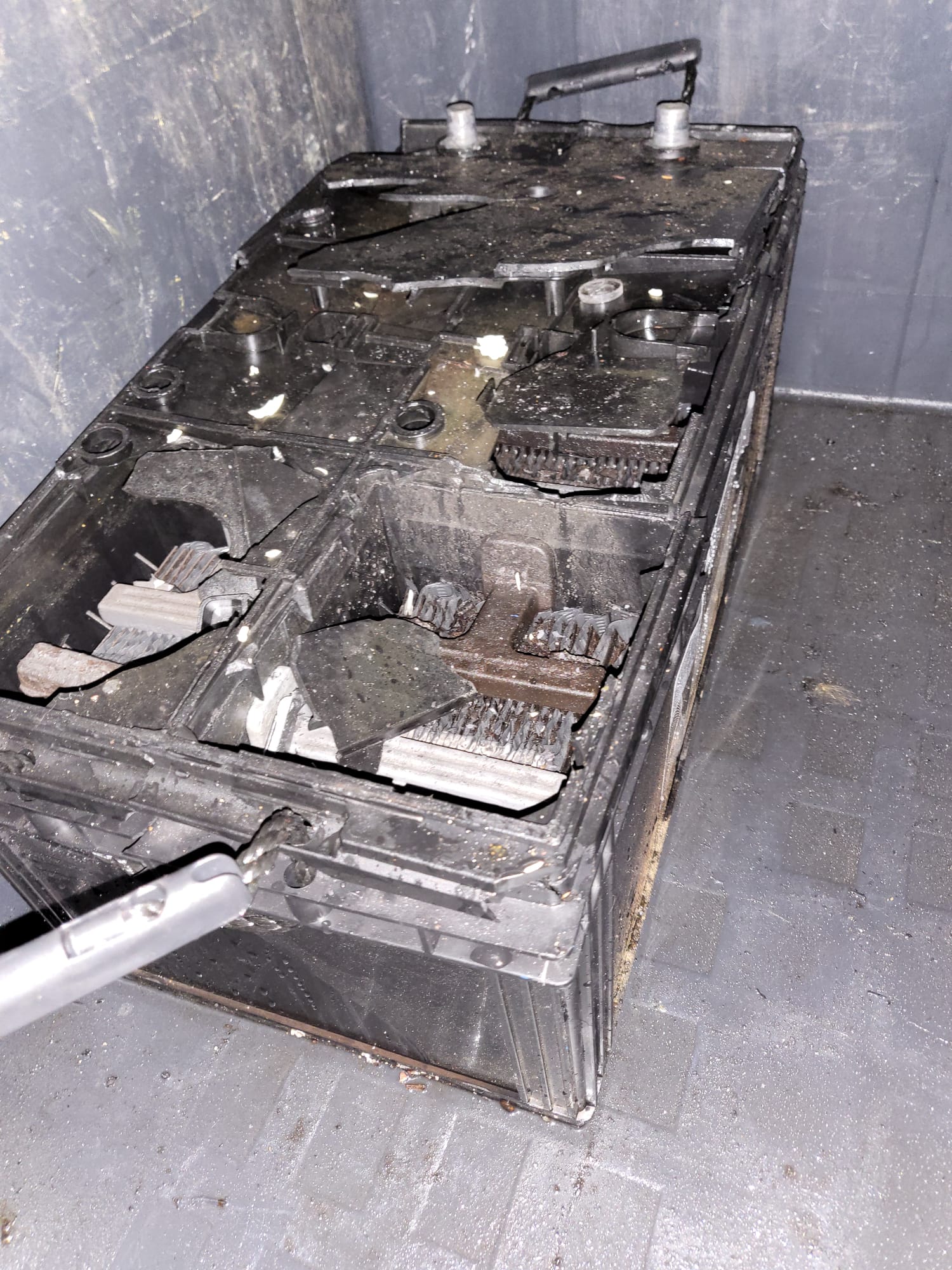 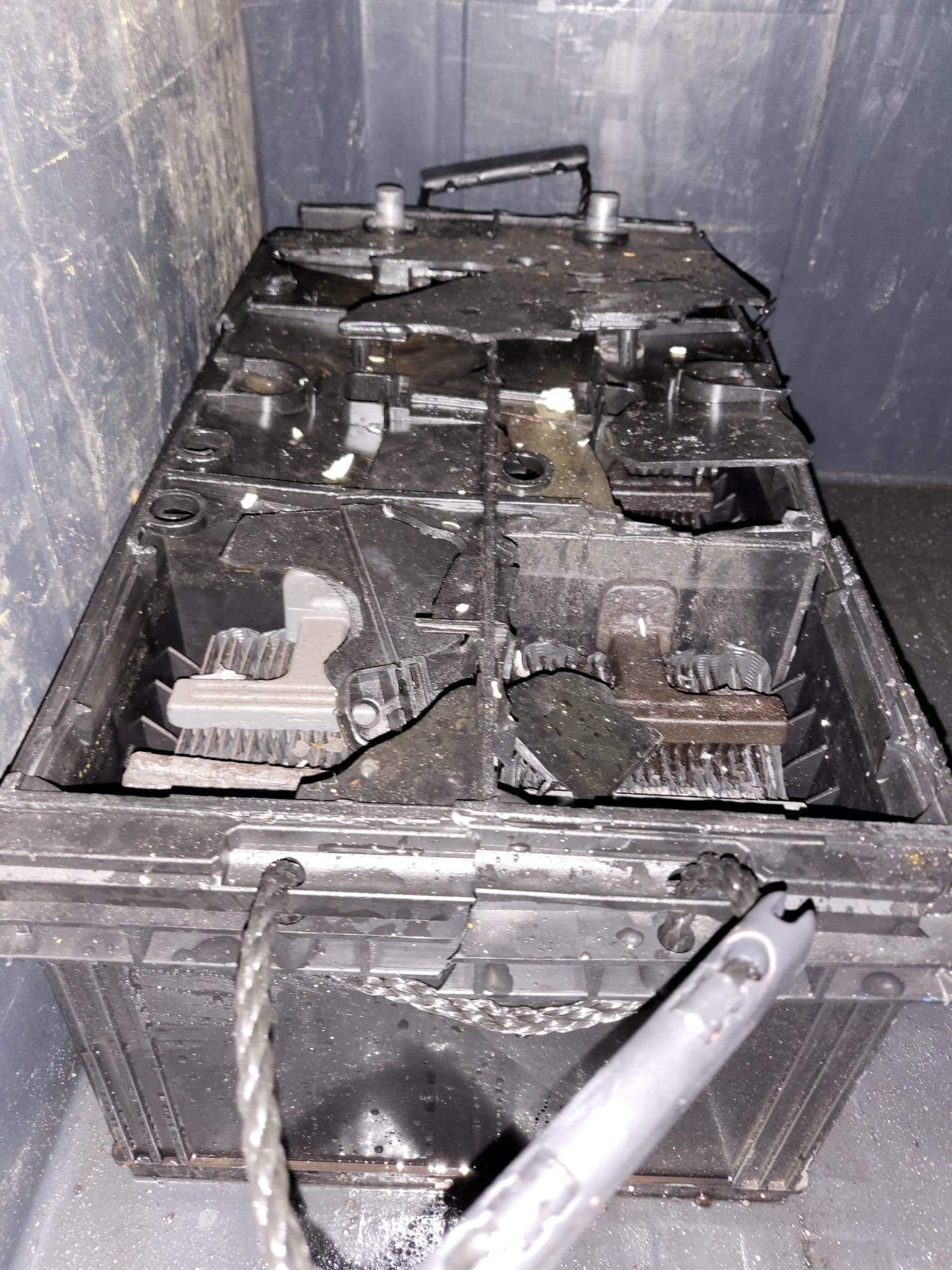 Looks interesting, what are your settings of the charger?
Temperature compensation? What device is connected via VE.Smart network?

Have seen a couple of lead based batteries do this.

One from overcharging but it was a gel and the person was charging at amps way higher than recommended. This battery also failed with high voltage.

Another because someone forgot to unblock the vent. His second one because it was dropped and case damaged.

Another when the owner was not checking fluid levels and it was almost dry.

These batteries do off gas alot. I wonder if there was not inproper ventilation and a spark ignited some of the offgas here.

One when they decided after never doing an equalisation charge do one and there was plates shorted out inside. This one had a weird voltage too.

So not an unusual sight in my experience. Also I might add that only one of these experiences had a Victron charger on it.

I am sorry you had a poor experience like this. Pretty dangerous and bad thing. It will be interesting to see if the root cause of this one was.

I'm not sure this will help, but I had something similar happen on my system but with lithium batteries (and no serious damage luckily)

I have a cerbo along with smart shunt, battery protect, victron mppt, multiplus and 4 280ah lithium batteries.

I'm in my camper van one day and I hear my roof fan clicking on and off. I look at my cerbo (touch screen) and everything looks normal (I think it showed system voltage of 13.3v or something).

I had been working on the system the day prior and had my multimeter handy and the system voltage was actually 16.1v (yikes). The fan cycling on and off was my battery protect flipping on and off killing the loads, so it did it's job saving my DC equipment downstream.

I logged into each of my batteries (bluetooth BMS's) and they were all in safety disconnect because of the high voltage, so they worked as intended and I'm assuming no damage.

All my system voltages were showing 13.3v from the cerbo and also logging into my shunt and solar charger via victron connect, but actual voltage per multimeter was 16v+ across the system.

With the batteries disconnected due to high voltage and the multiplus turned off, the solar charger was the only power source. Why would it be pushing 16v+ when it's configured with a very conservative bulk/absorption voltage of 14.1v?

Here is my working theory (I'm pretty sure this is right) -

When I did system maintenance the day prior, I disconnected all DC power. This caused my smart shunt to lose it's firmware (it's happened multiple times before, but I can't repeat it). It seems to operate and communicate with the cerbo with no firmware, but it doesn't work properly and clearly says "no firmware" if you go into victron connect via bluetooth.

I also had DVCC set up on the cerbo so that the mppt and the multiplus would look at the smart shunt for a shared voltage reference for the whole system. The cerbo was able to get a voltage from the smart shunt, which was incorrectly locked at 13.3v (even as battery voltage climbed), so the solar charger just kept pushing more volts because battery voltage would never rise (based on the shunt).

The fix - I updated the smart shunt firmware and it's working fine. I opened a support case with the seller of the shunt, but I have not been able to reproduce the issue despite trying many times. I'm wondering if the latest firmware might have fixed the "lost firmware" issue, but the firmware was pretty current before I had this problem and I had seen it in the past several times. I expect to see it again some day. To avoid this happening again in the future, I turned off DVCC and each charger is now using it's own voltage reference (not depending on the smart shunt). That's not optimal, but I don't want to risk this happening again. I may just buy a new smart shunt out of pocket for peace of mind and turn DVCC back on.

I have no idea if my issue has anything in common with the issue reported in this thread, but I see some similarities. Without the BMS's shutting the batteries off, it would have been a catastrophic event. I was really surprised the charging device would put out 16+ volts when it's configured to charge at 14.1v, but I guess the functionality makes sense (to account for voltage drop) as long as you have an accurate battery reference voltage. Super dangerous situation without reliable voltage cutoff controls in place (which are not typical for lead acid). 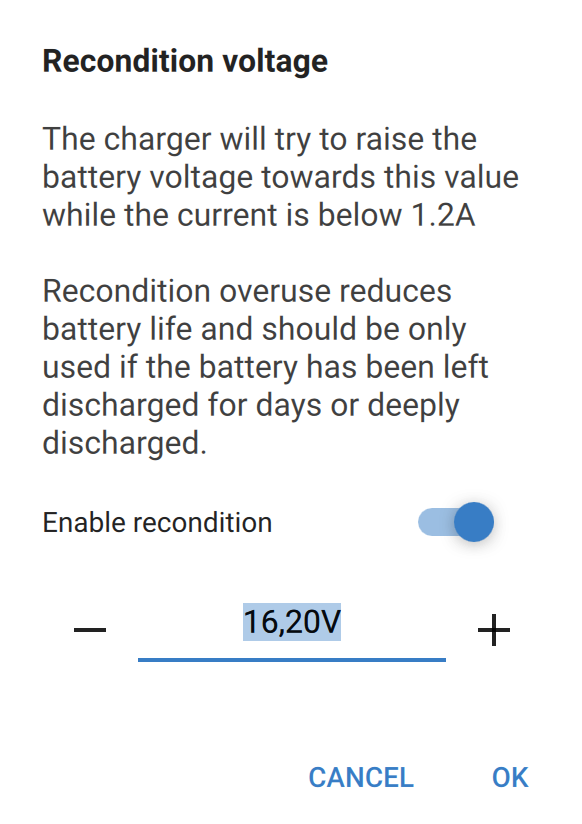 Smart charger not powering On after firmware update

Generator Warm Up, Charger walk in

Can a Phoenix 12/50 charger parallel both battery charging banks to provide 100amps to a single battery bank?