I have a 64-bit Raspberry Pi 4 with an Ubuntu operating system on which I have installed a 64-bit Docker system.

Now I am wondering if anyone can help me to find the venus-docker-server, venus-docker-grafana and venus-docker-upnp images that I can use, if such images are available.

Moved to "Modifications" Space for non-Victron-supported systems and interfaces.

Having the same issue.

ERROR: no matching manifest for linux/arm64/v8 in the manifest list entries

I recently installed this on an OrangePi running on Armbian.

With some trial and error I now got it working.

The steps i followed:

1. install docker for linux as described on the docker site. https://docs.docker.com/engine/install/ubuntu/

and test it with hello-world

2. Install the docker compose command. (this was missing

3. add user pi to the system

8. Edit the Yaml file (and this makes it working)

10. The command at point 9 showed the same results as Matthijs had in his video. During pulling and building the Victron-Grafana code it looked like this: 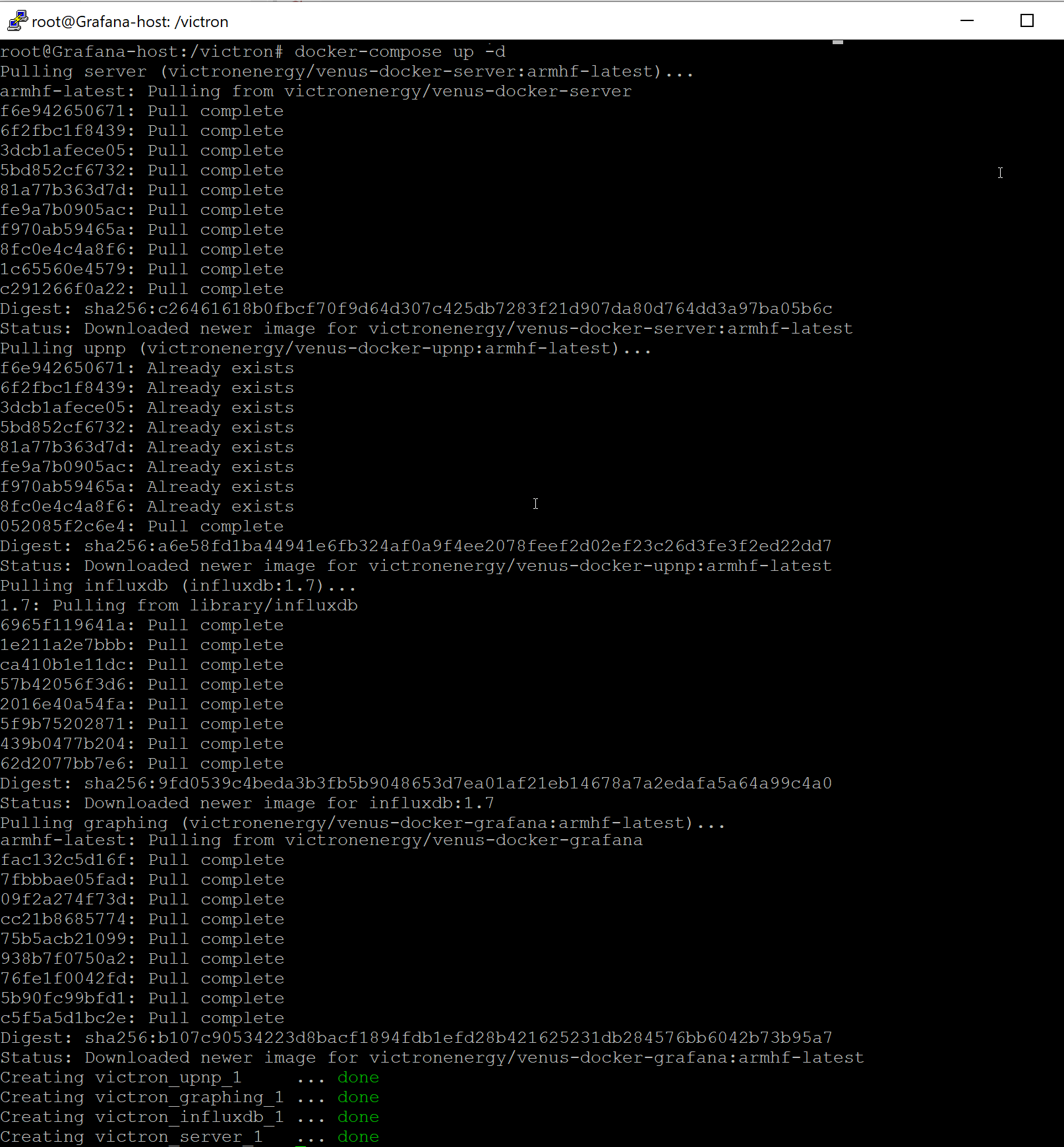 11. After the complete messages I browsed to the http://localhost:8088 and got the following dashboard overview:

The only thing I now need to figure out is how to automaticly start the Venus-docker instances after a reboot of the Pi.

I now restarted them by exceuting the command docker-compose up --d But I want them to start again at a reboot.

The reason I edited my docker-compose.yaml file was the following.

I fresly installed docker and confirmed it was running hello-world. The documentation stated it is a standard image.

I then searched the docker site for victronenery and found the following containers on their site:

I then went to https://hub.docker.com/r/victronenergy/venus-docker-grafana/tags

I there found some info on architecture; chose the armhf-2.0.2 as this sounded most logical to me.

Hope this helps someone in the future.

A trick I discovered was to force a restart of the services in the docker-compose.yaml file.

Four places - highlighted in blue below. Just re-run docker-compose up after the change. Worked for me; hope it works for you.

Thank you for your Help. I indeed found an older post from in which you;'ve mentioned the same. But I got an error message when I've added the restart line.

I edit it with Notepad ++ insted of the editor in linux

I think I got it. When editing in Notepad++ it autmaticly groups the commands.

I've removed a [ ] space which made it an individual entry. 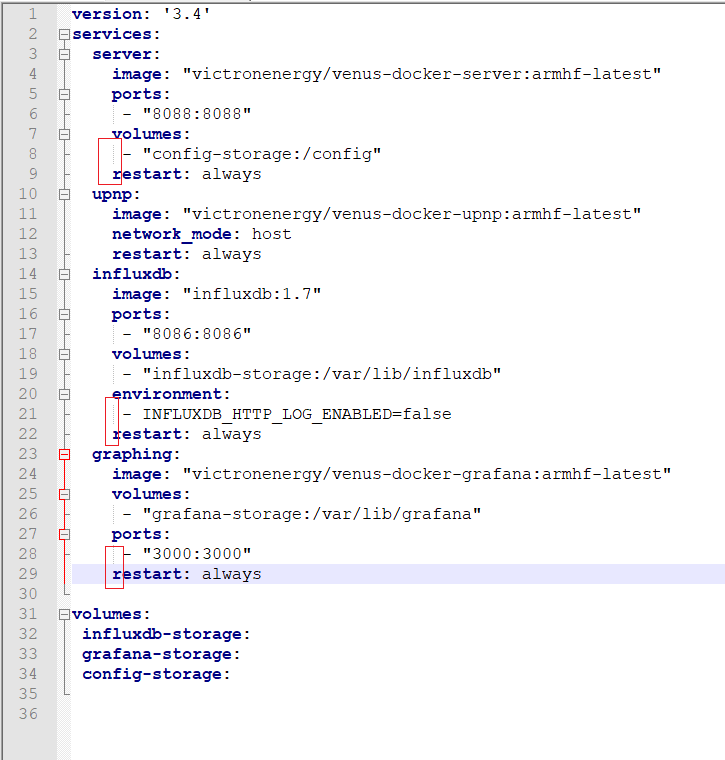 After that I restarted the command:

I've rebooted the Pi and indeed now my dashboard is instantly..

Now it's time to start customizing the dashboard.

Thank you for your help.

Hi, I have just tried getting this to work with the following versions:

Along with latest venus-grafana-docker (as of today).

Everything works fine on my m1 macbook, but when adjusting the docker tag for each image to `armhf-latest` to run on the raspberry pi, I get the following error in grafana:

Has anyone else experienced this and have any idea how to fix?

For anyone else encountering the above issue, I managed to solve it by changing the venus-docker-grafana tag from armhf-latest to armhf-2.0.0 since armhf-latest isn't actually the latest build for the grafana image. The other two image tags remain as armhf-latest.

It also looks like someone else also found another possible solution by building their own image - they talk about it here: https://github.com/victronenergy/venus-docker-grafana-images/issues/12

Upgrading to Grafana Vs. 7.0 or newer

Question regarding grafana - why don’t I see MQTT path options like in the video?