AGM batteries bulging after overcharge from MPPT 150/35, why?

Recently I recabled all my solar system (I moved it somewhere else) and today I was looking at the system and the batteries were deeply bulged, hot on touch, and I would have expected them to explode.

The current state of charge is 100% and the battery voltage is 52V once I cut all the breakers.

I expect the batteries to be dead now, but I need to know what caused this to avoid repeating the same mistake twice. Today is a sunny day and I expect that the MTTP overcharged the batteries. What I don't understand is why.

Could it be the battery wiring that induced a small resistance causing a voltage drop and causing the MPPT to think the battery voltage to be lower than actual?

There is also something fishy about the circuit breaker of the batteries. I still read just above 1V after the breaker when the breaker is on the OFF position. But I disconnected it and checked the resistance and it seemed to work correctly, also when ON, the breaker does not cause a voltage drop or anything. Perhaps there is a device on the other side of the breaker, a small capacity that causes this... 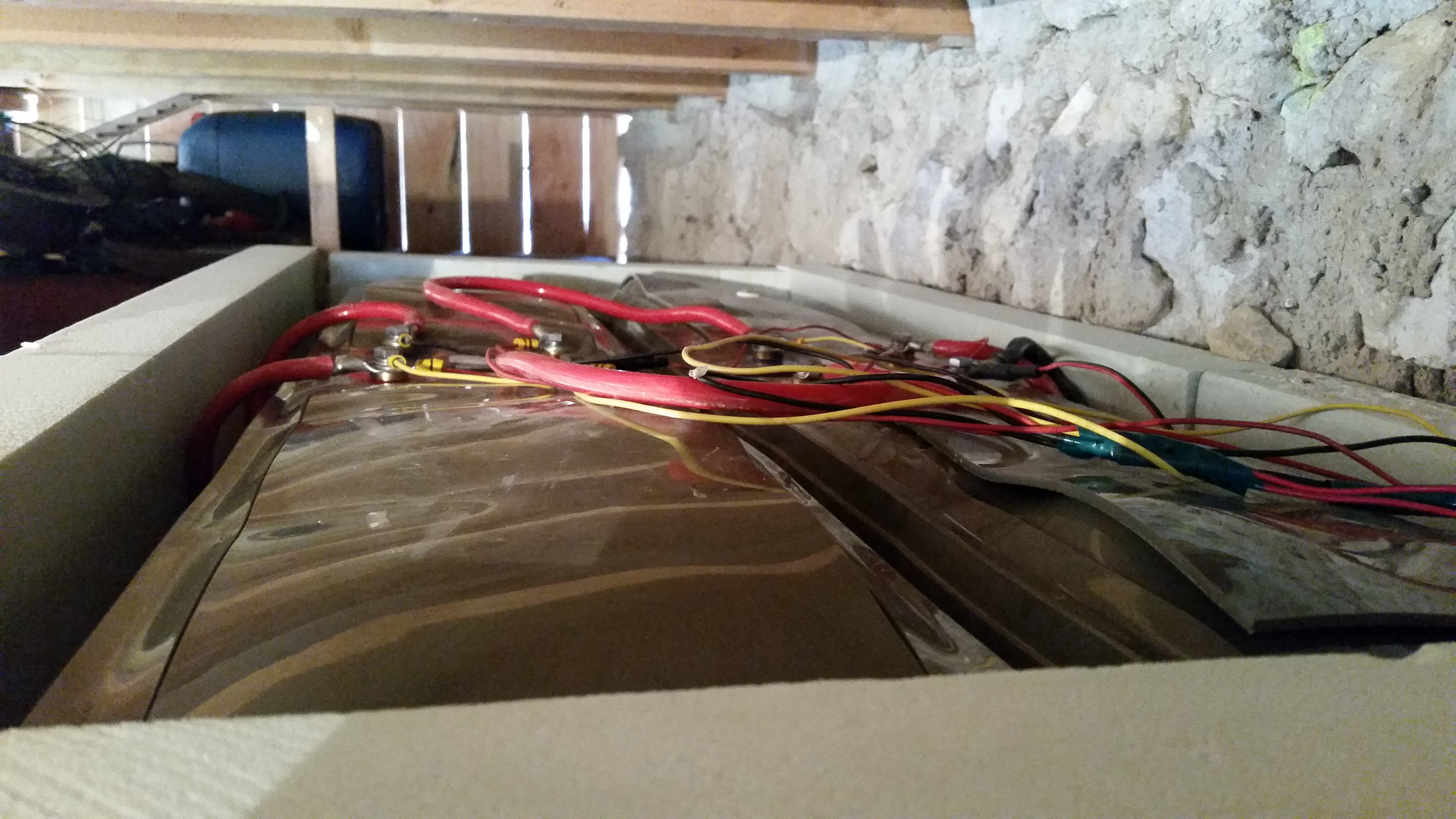 Also, now, the batteries are arranged a bit differently and there is less space around them. Could it be that they went too hot in their new environment and did not cope with that ? I arranged insulation around them but perhaps the insulated box is now too small and head dissipation could not happen correctly, is that enough to cause this kind of damage?

Charge Voltage limits need to be reduced as lead acid batteries warm up and increased when the battery is cold. This is what the temperature compensation mechanism does. It reduces the charge Voltage by a set ammount per degree increase. The base temperature is 25ºC.

If your MPPT's are the Smart type (with Bluetooth) then you would need to use the battery temperature sensor with a Smartshunt or BMV-712. If you don't have one of these battery monitors then the Smart Battery Sense would be able convey actual battery Voltage and temperature to Smart MPPTs and the temperature compensation mechanism would work properly.

mildred klim8skeptic · Mar 31 at 02:37 PM
I have to check but I believe when I designed the system, the panels were not able to produce the max power the MPPT were able to handle. And I had a few summers that went ok that way. I believe it's the new battery enclosure that was too tight.
0 Likes 0 ·

mildred · Mar 29 at 05:36 PM
Thank you for the explanation, that's probably what happened.

Unfortunately, the MPPT is not the smart version. Is there a device that I could plug in to disconnect the batteries in the event of an abnormal temperature, charge current or voltage ? ideally a protection switch connected to a GX device.

Ideally you would limit the charging current of the two MPPT chargers to like 22Ah (10% of your 220Ah battery).

This can be done from within VictronConnect in the battery settings of your MPPTs: 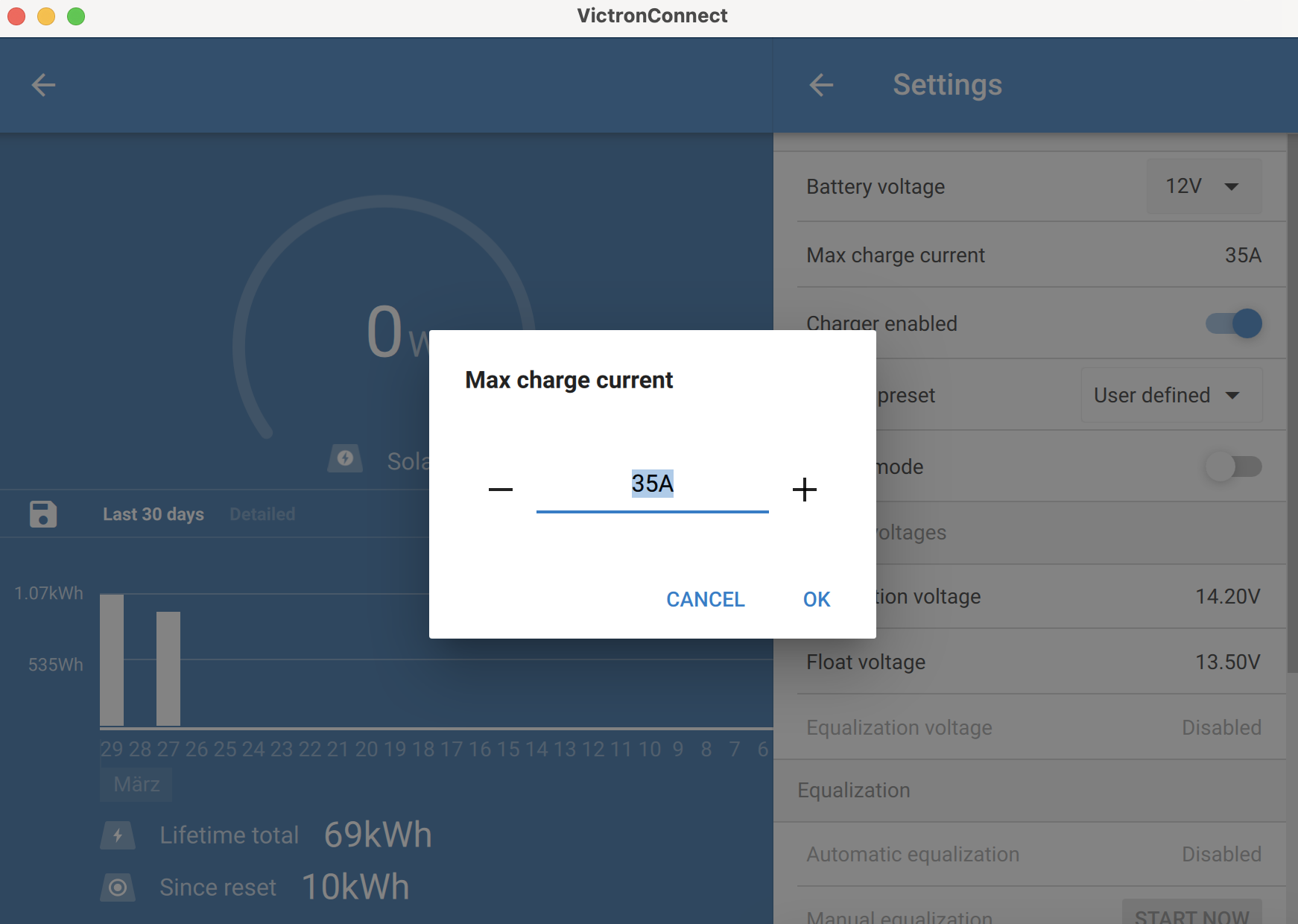 From the datasheet for Victron deep cycle AGM batteries

Have you got a GX, does it report to VRM? This would be a good source of information and alerts as to what happened.

You really would have wanted the charging coordinated between the devices with DVCC, and appropriate limits set.

Without this you can easily run into problems.

MPPT 100/30 showing hauting behaviour when being in absorption mode