Smart Solar MPPT100/20; the solar MPPT output fails to track the incoming solar irradiance on occasions and takes a while to recover and return to normal operation.

I was watching the MPPT behaviour during the mostly sunny day (as can be seen by the Grid PV inverter data) but then the occasional cloud dropped the solar irradiance the Victron Smart Solar stopped being smart, got confused and dropped its power output to near zero even after the solar irradiance had returned.

My grid inverter had a small drop in power output for a short time but the Smart Solar MPPT100/20 took a while. On the second occurrence, I needed to isolate and reconnect the PV breaker for the Smart Solar to start to work again. Note the first dip in output power in the afternoon, on the grid Fronius Inverter a very slight dip in power, while the smart solar's output dropped very significant. The second major dip in power output I was watching and was when that I needed to turn the PV breaker off and on to get the smart solar back working. It does seem that major changes in solar irradiance (which is normal) causes the MPPT to get confused, it does get going again without any intervention but with the penalty of some loss of charge energy compared to the Fronius Galvo 2.0 inverter performance. The data for both systems was using a Venus GX, logged setting 15 minutes.

I hope this gives sufficient information to be able to find the cause of the glitch in performance. 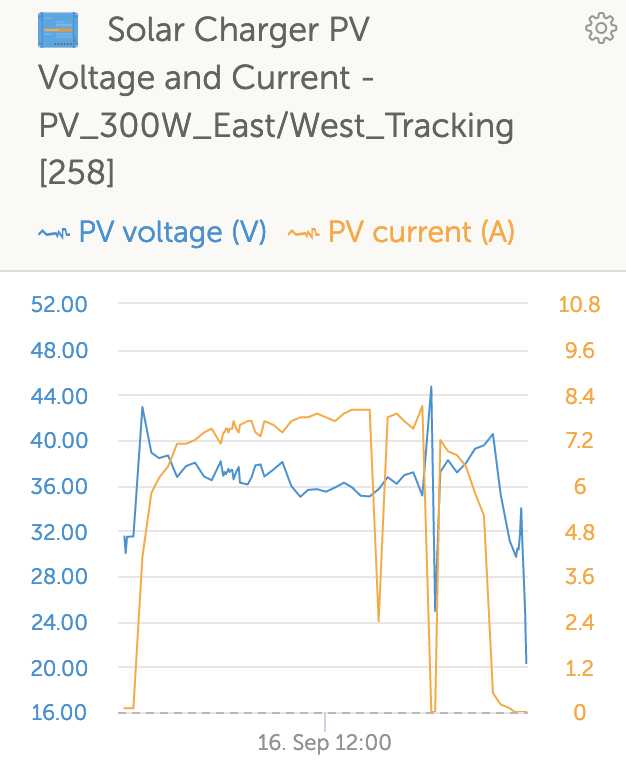 What I think you might be seeing here is the mppt tracking, and the vrm chart sample time coinciding with that. This may not seem likely, but the mppt will track every 10 minutes religiously, and even with vrm 15 min sampling, it can indeed happen. Regularly too.

You could investigate this further with VictronConnect Trends, which graphs per-second. From mine today (foul cloud).. 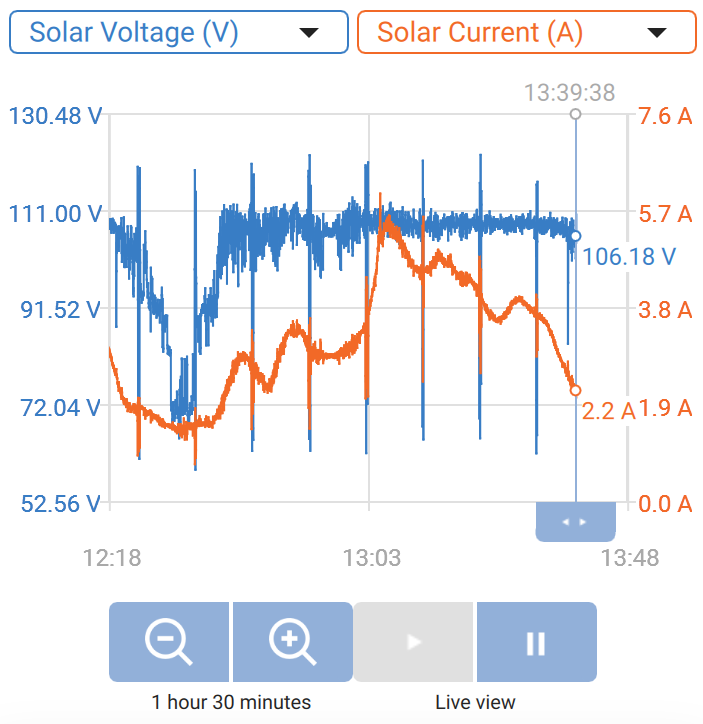 You can see the tracking happening every 10 min. A closer look at a single tracking cycle(s).. 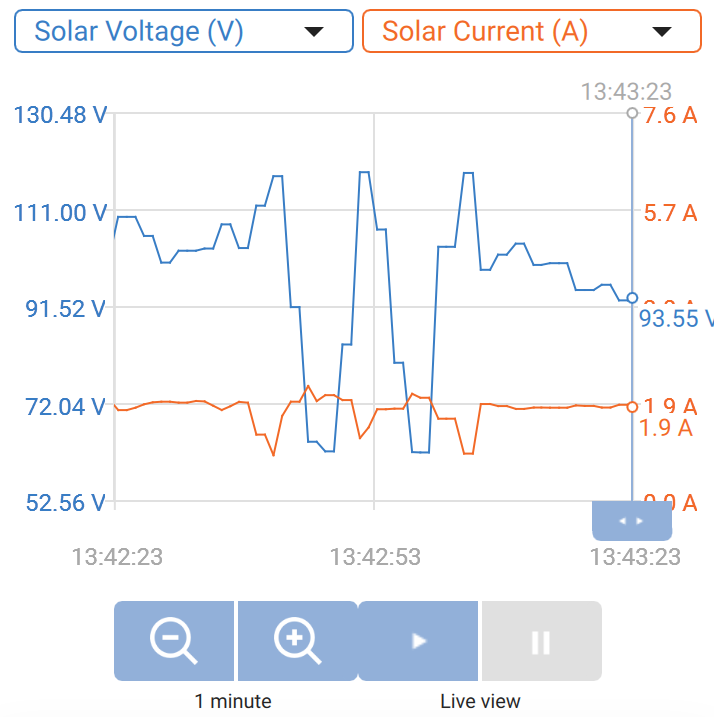 Yes, it can take some time to complete, but the energy loss overall is minimal.

And vrm could pick up any part of those cycles regularly and throw 'outliers'. A reboot of the mppt will force a fresh retrack, but I'm not sure where this leaves the scheduling of it's future 10 min cycles.

I love my vrm, but the 'outliers' there aren't really good enough to troubleshoot your mppt or call a Bug.

raymiller · Sep 18 at 10:09 PM
Thanks Yes I'm aware of the 10 minute (brief i.e. second) interruption as the MPPT resets etc this normally does not show up unless you are watching very closely. The interruption I'm talking about was a minute or more and showed up on the 15minute VRM data sample, which the normal MPPT 10minute short interruption does not. The problem seems to occur in the transition from a high solar irradiance and dropping down in % terms to say 10% or below. I still think the MPPT goes into a sleep state for minutes, which is unusual.
Share ·