Skip to main content
This question was closed Aug 29, 2019 at 04:38 AM by mvader (Victron Energy) for the following reason: Other

Inaccurate and poor absorption on SmartSolar: An Update

I'm posting this on behalf of another user, @Solvan.

Solvan recently posted the results of testing his own Smartsolar units, as well a summary of testing other units stocked by his vendor. These tests demonstrated gross inaccuracy in the units measurement of the current, resulting in premature termination of absorption charge, and incomplete daily charging.

The previous relevant threads can be found here and here . Since posting this, two things have happened:

- Multiple other users have reported the same experiences: @bigbillsd (here), @lnanne (here) and @RedRover (here). Note also, that this topic has come up previously, and been sidestepped. Multiple times, in fact.


- Solvan himself has spoken with me, and informed me he has been completely locked out of the forum, following posting this final thread .

Furthermore, he received an email from Guy Stewart, the moderator here, explicitly stating his posts have been "moderated" as a result of exposing the faults in the MPPT units, and instructing him to provide any further information behind closed doors, instead of publicly releasing it for other owners awareness. He has provided this email, and his response, attached below.

Additionally, the vendor, who went out of their way to help Solvan test his, and the other units, is now reportedly unable to return the units, for fear of the same persecution, leaving them thousands of dollars out of pocket.

It is also worth noting that Guy Stewart is part of the management staff at Rainbow Solar - of which a large pat of their business is the sales of Victron equipment.

I am very curious to hear if any others are experiencing the same difficulties with their units accuracy, and whether people think this is an acceptable standard of customer support, considering this overtly suppressing negative feedback in an official support service.

@straightup You must have mis read my post. I said they will always be different due to some of the power is being directly used by my coach all the time (8 amps for my coach) So those 8 amps are showing as being generated by my controller but they won't show on the meter as I am using them before they can get to the battery. I imagine the OP might be seeing that and not understanding they won't go to the shunt if they are being used realtime. His difference was around 6amps, very plausible. I am NOT having issues charging my batteries with my victron controller. And to be perfectly clear to anyone here I do NOT work for any vendor nor do I sell anything. I purchased my Victron Equipment from a vendor here in San Diego CA. -Bill

Hey @StraightUp, please use that other post; not make new ones. thanks a lot.

I've re-opened the other one:

This thread should be deleted, not just closed. Along with your other many troll posts in a very short time.

"Trolling" is posting misinformation with the deliberate intent to provoke a reaction. This is very clearly not the case here - there is proven photographic evidence and multiple user accounts of a demonstrable problem.

So on what grounds do you claim this should be dismissed? Do you dispute the accuracy of the evidence? Or are you just calling anyone who has a problem with a Victron product a 'troll'?

Wish we have more moderators helping out when the officials are not around. The topic leads to nothing. No new information and the learning curve is close to zero except that one can think Solvan has multiple accounts.

If that's all you're taking away from this, then you are clearly not paying attention, perhaps by choice? Go back and read it again - Victron is producing faulty products, and officials you're calling for are actively suppressing the discussion of this.

And for the record - no, I am not Solvan. And I wouldn't have become involved in were it not for wondering why he suddenly disappeared.

If you can help to get the faulty measuring unit returned; and or those 15 units that are reported to not measure correctly; please do; thanks!

Thankyou for your response. I have no involvment in the original units at all, I will let Solvan reply to that if/when he can.

At lunch yesterday 500 Wh yield today at lunch 430 wh yield and its gone to absubrsion already? Same low voltage as yesterday. Is this the problem you guys are finding? 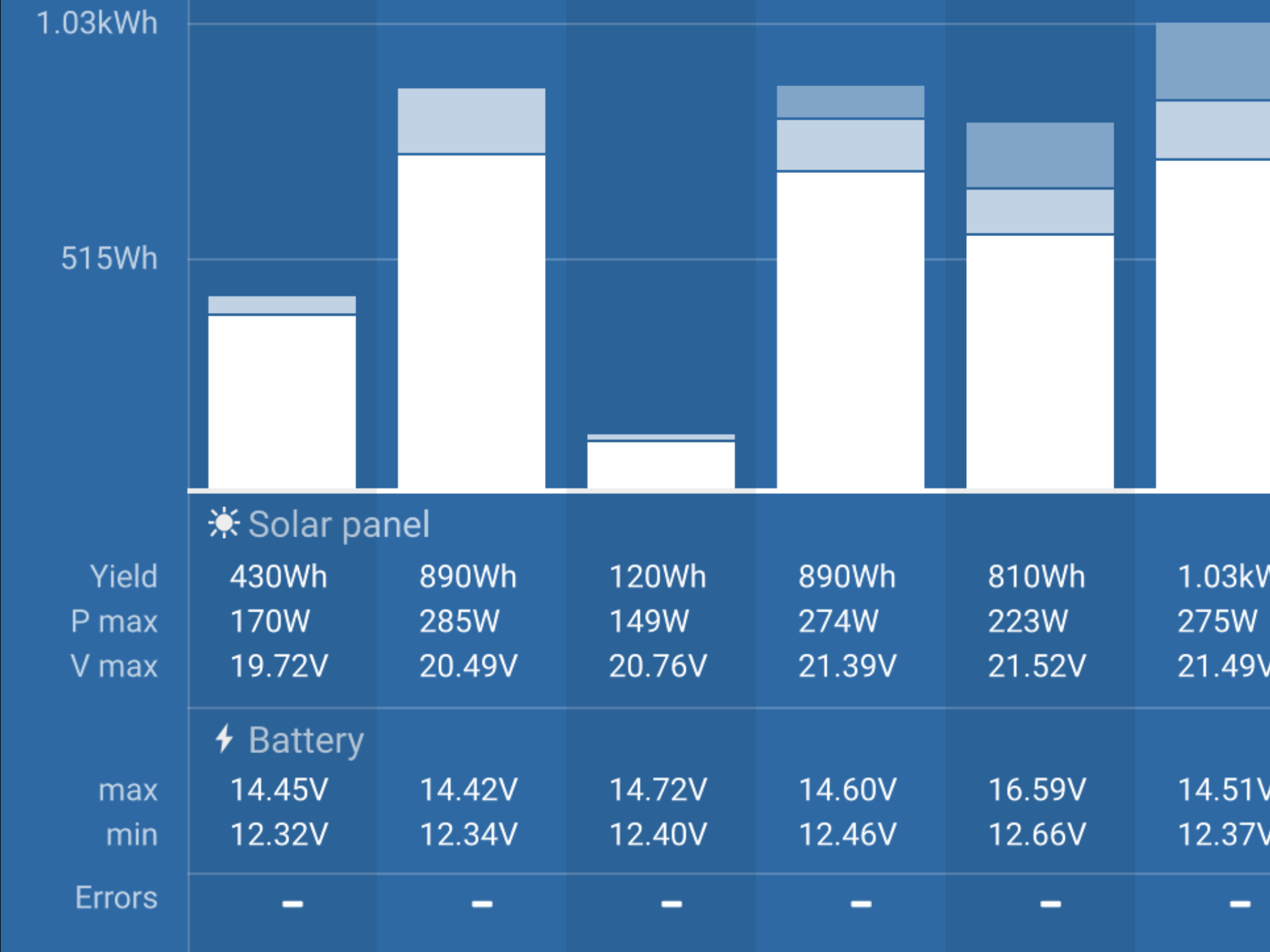 Hi Southace, please make sure to test with MPPT firmware v1.42: it solves this problem.

To install it, a few options:

- wait a few weeks for VictronConnect 5.9 to be released

- use the VictronConnect you already have and take the firmware file from https://professional.victronenergy.com. That also has the change log.

- use VRM Remote firmware updates; requires a GX device to be in the system.

I’ll lock this old thread; please post a new question in case you have an issue. Thanks!

EDIT: a unit going *into* absorption before you expect it to do so was not what was discussed here. A charger goes into absorption once it reaches the Absorption voltage. Before that, it is charging with maximum power (which ofcourse varies for solar chargers - its the available power from the pv) and during that time it is in the Bulk phase.