My Venus GX seemingly cannot accept a gateway when using a static (manual) IP address. I can enter the gateway, but it reverts to 0.0.0.0 when I click Return.

...but it's not saved correctly.

I can the Venux GX at the Static IP via LAN directly and indirectly (through a switch). I can also access other remote nodes via a VPN service, but not the Venux GX. Thus while it could be a VPN problem, my first suspicion is the Venux GX gateway. 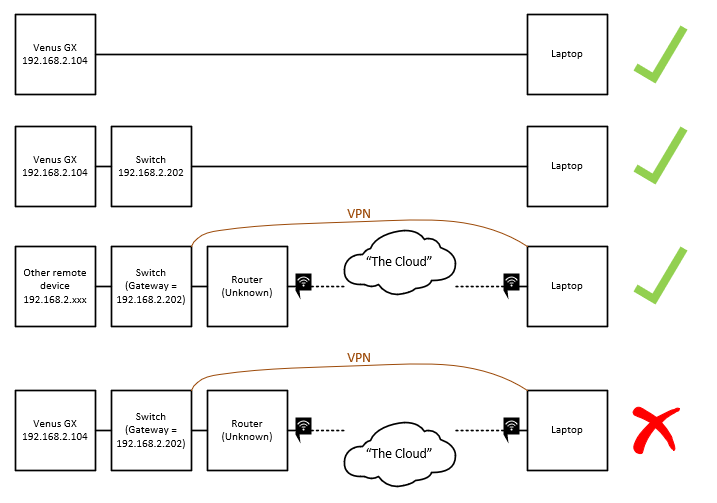 I think the problem is when you have both LAN and Wireless interfaces active. The default-gateway can only be set on one interface. If you currently connect to WiFi then you will have to disable it and connect to the LAN interface and then set it.

*Note that you need to be on the same subnet to do that as there is no default-gateway for the LAN interface and you might lose connectivity once the WiFi is disabled.

I do have the very same issue as described above by brmurray in his different posts.

CERBO GX with the following connections:

Connected to VRM through home router

I want to install a ALFA WIFI CAMP PRO2 router with amplified WiFi antenna on board so that I can connect easily to a marina hotspot to get access to internet for emails and so, and to have the Cerbo connect to VRM. This used to work fine at home (marina home with boat just outside) when connecting CERBO to my FREEBOX home router, directly or through 2 existing Wifi extenders (NETGEAR and ZYXEL).

My engineer gut feeling tells me that we have some bugs here with some random behavior that I could not figure out.

Last and not very important, CERBO does not seem to store known network passwords as opposed to what the manual says page 15… It does make testing a bigger pain :-(

Any help would be most welcome.

If you configure it normally (but with manually configured networking settings), does it work?

By normally I mean to use for gateway the LAN IP of your Internet router. And then see if VRM works.

I haven't tried that, but the problem seems to be that the VenusGX won't accept any IP address; it just reverts to 0. Interesting, I can enter static IP, just not the gateway.

In order to reach the VenusGX through your VPN tunnel, you must enter a gateway on your VenusGX (your VPN router)

Understood; I won't post the gateway here, but the last group is not 000.

I just tried that out by myself, it was no problem setting a Gateway.

Another tipp that can work: Use DHCP and set a fixed lease for your VenusGX. (Venus GX is always getting the same IP then)

This can (most propably) be done on your router (if it does DHCP).

Can you read data from Venus GX via VE.Direct to USB interface?

Data cable from ET112 Not present, but data is shown in VRM and on Remote Console.

Do I need to install a Venus GX if I have a CCGX?