disparity between DC energy and AC energy in a ESS three phase system, after firmware update 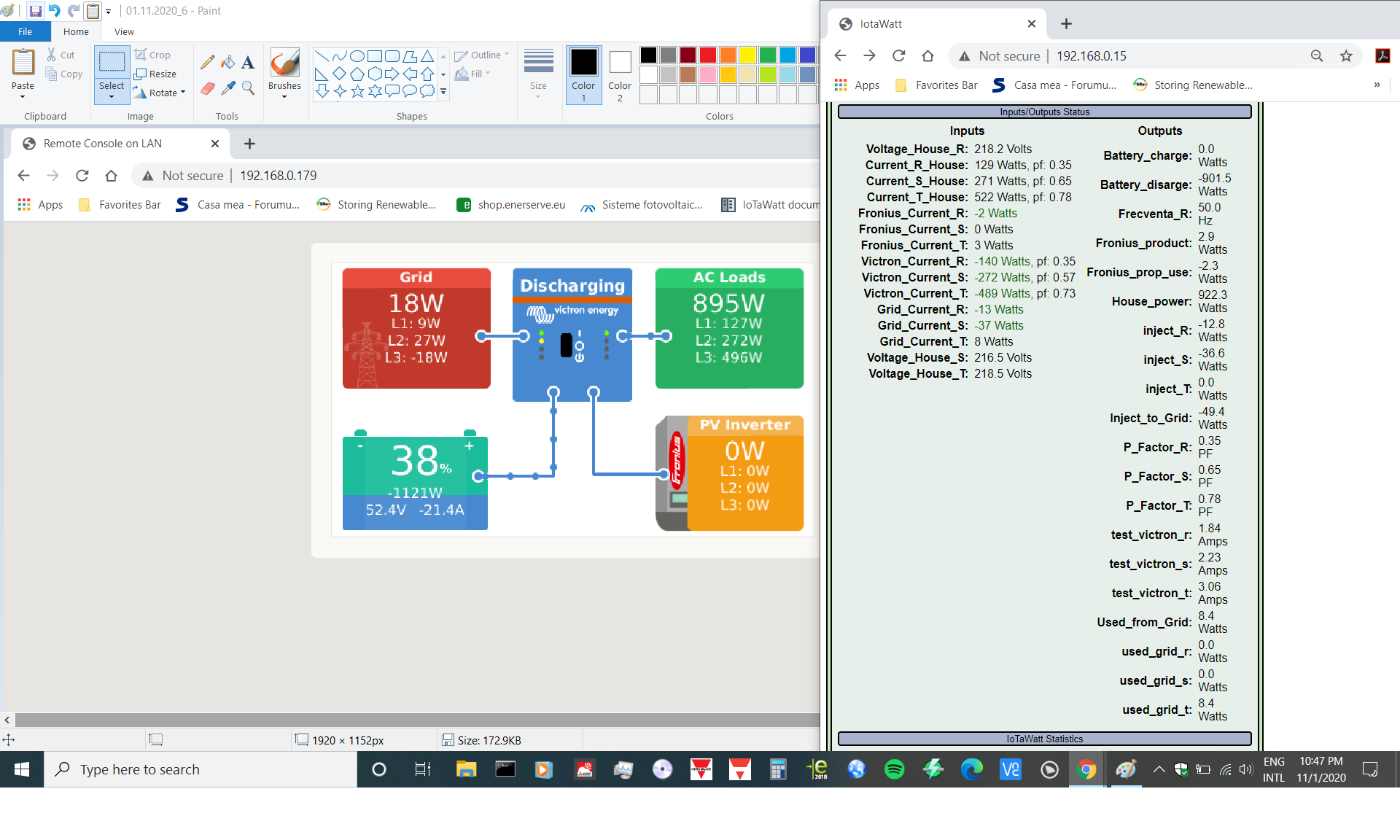 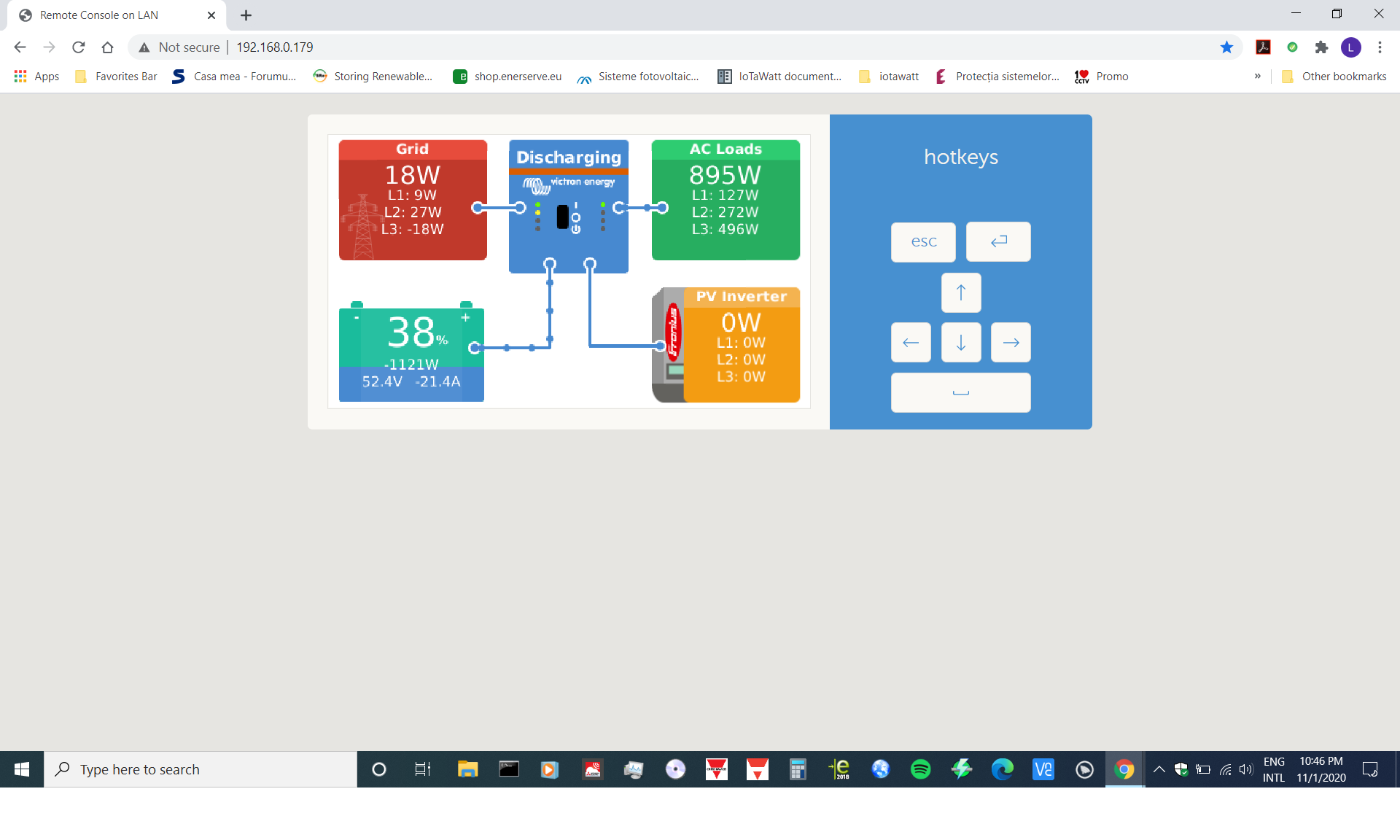 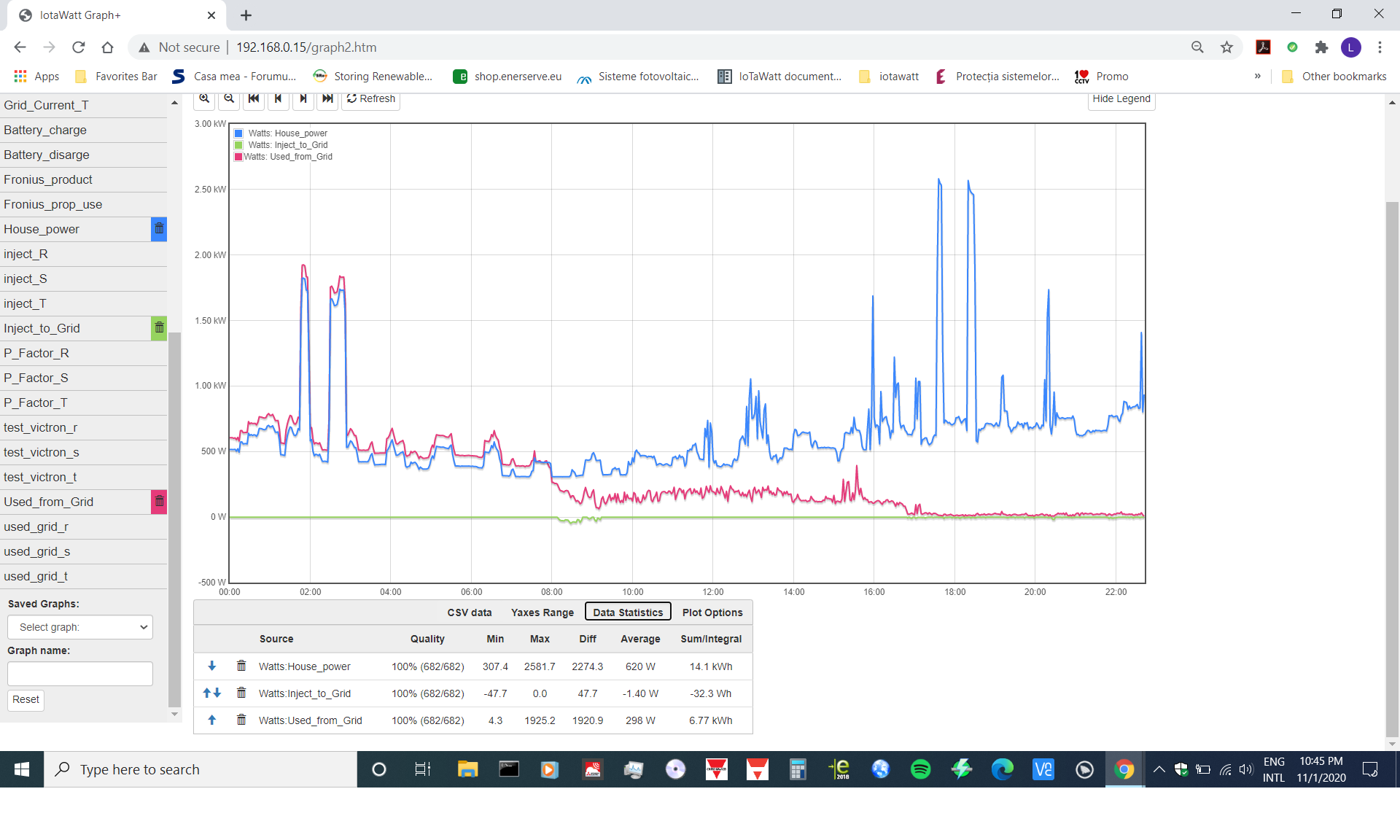 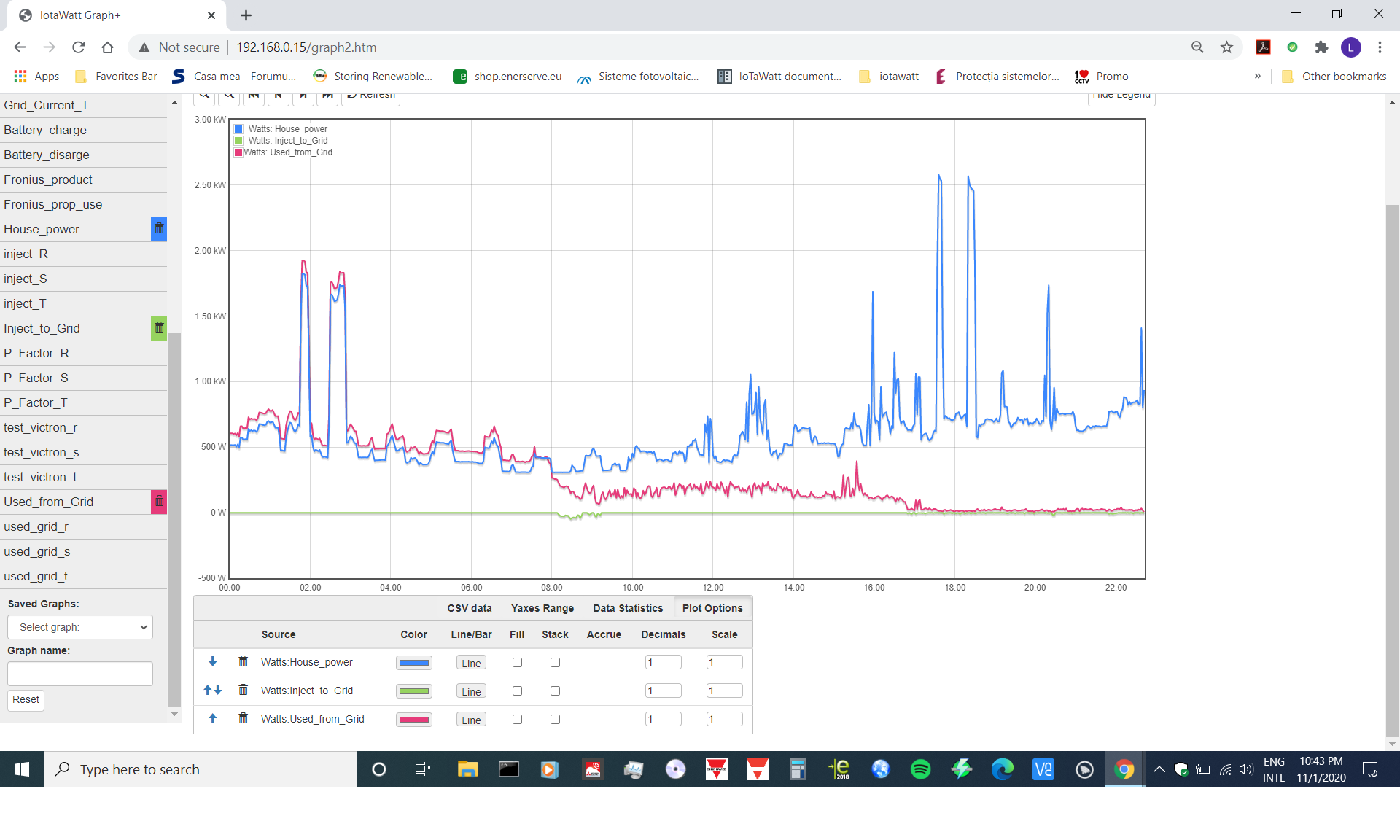 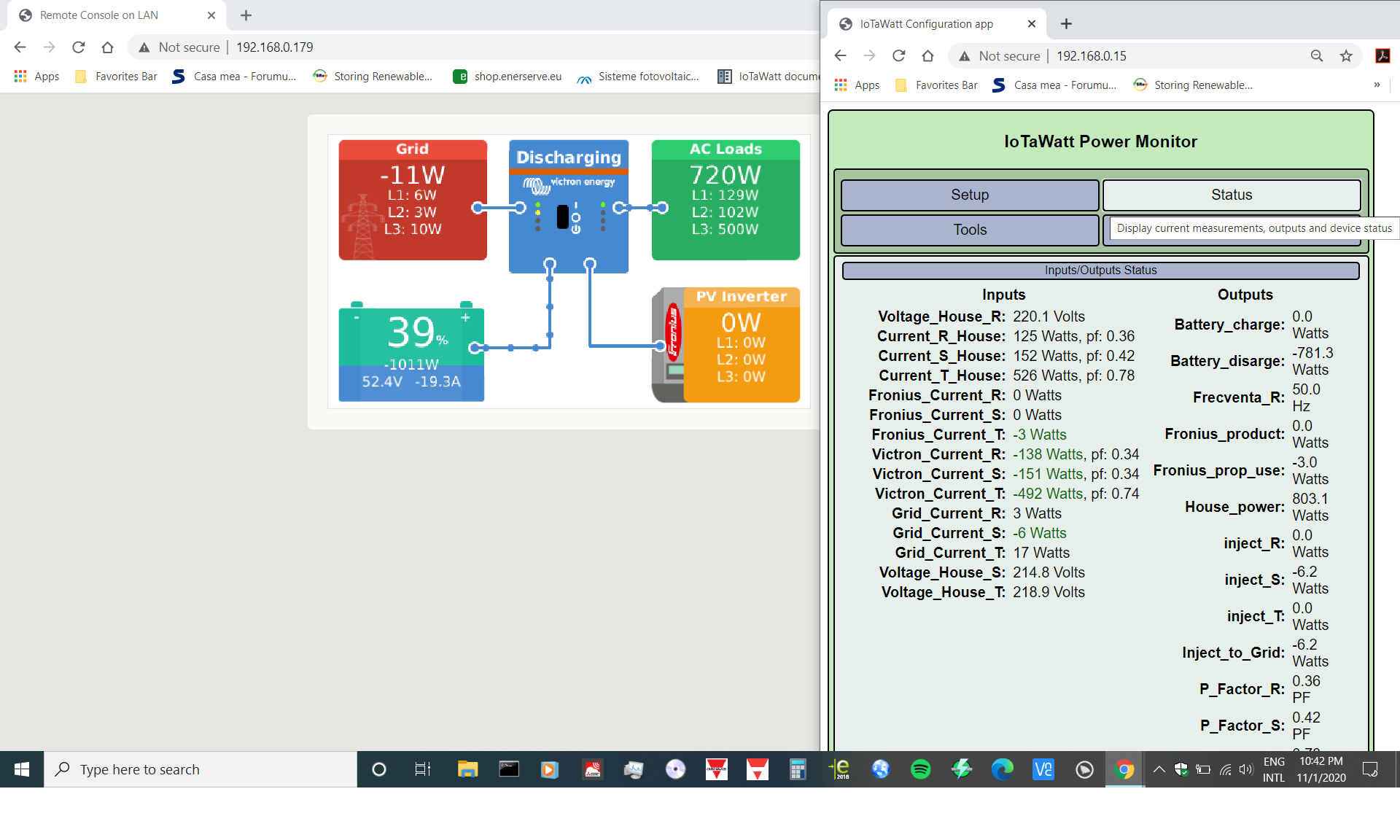 just finished to update the firmware for 3 units Multiplus 5 kW, including assistants by the company who sell entire system:

during update, activities was going well, but after it was finished, we clear observe some discrepancy between energy in AC out and energy from DC part, as in the attached pictures.

please note that there is an measurement independent from Victron system. 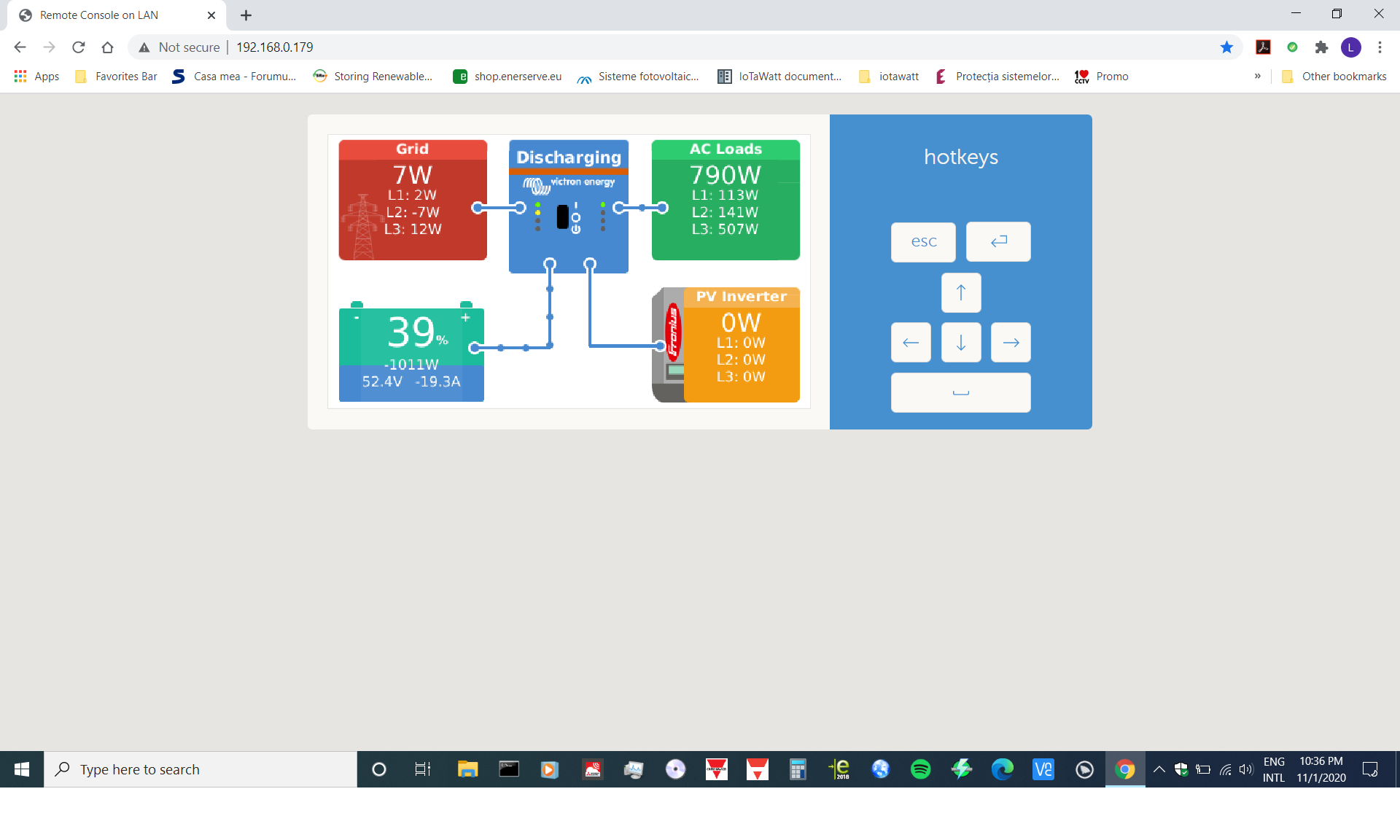 back in pictures with more data:

- to be sure/accurate , that information on DC part of ESS is exact, i was doing measurements with voltmeter for battery voltage and current clamp for current ; the measurements are same as the Color GX indicate for DC part , including calculus as power in DC .

- i was doing same measurements, for AC part, on voltage with multimeter and with clamp meter for current; also in this case, measurements are according with indication of color GX for the AC parts.

- in all measurement time, i was using approximately a constant load.

- after all of measurements, please try to have an answer regarding the system: efficiency is very bad , means self consummation of each VICTRON product is not as per their specification , or latest software/firmware is not fine regulating the ESS system?

separate, we have indication marked with some yellow color, for the power taken from battery as also for the house .

indicated values shown on picture, are not matching... 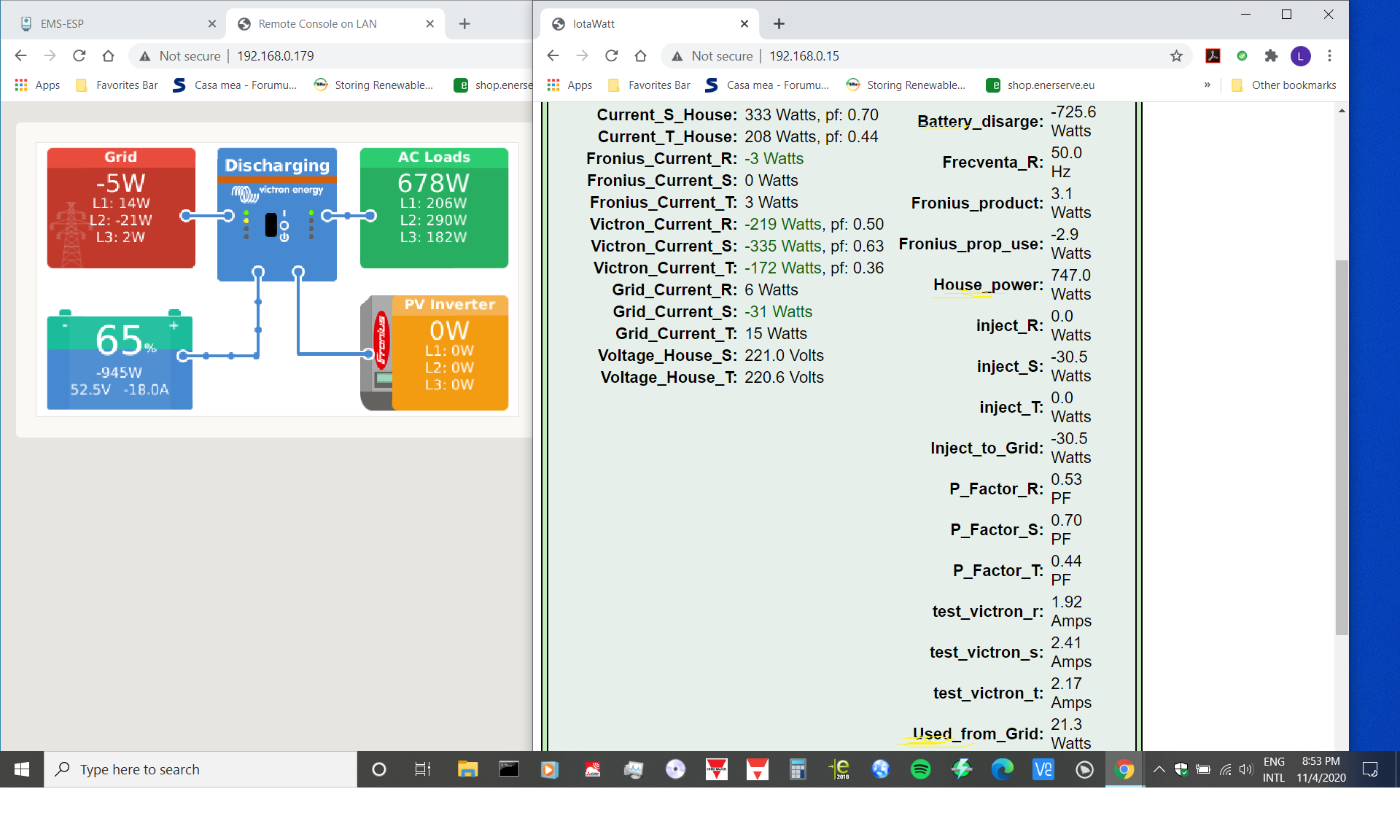 Can you explain what numbers are not matching?

How are you measuring AC / DC outside of the Victron system?

What are you using as battery monitor? (in other words: are the battery numbers coming from the battery (BMS) or the Victron BMV?

-for monitor battery , i m using internal BMS of BYD batteries, connected on CAN bus as per Victron documents.

we have 1022 w extracted from battery, another 7 w taken from grid, totally 1029 w; make measurements with multimeter and clamp meter for battery and confirm 1022 w.

as load, at that moment- try to keep load constant- is 790 w; make same measurement with multimeter and clamp meter, confirm 790 w.

difference between what i extract and what is used, is 239 w .

do you think that is normal to have lose such amount - it is near 30% difference between extracted and used ?

checking as this, it was coming question about self consumption of victron hardware, or a problem in the latest software/firmware .

- separate from Victron equipement, i m doing measurements - at a constant load possible for me- with clamp meter in DC as also in AC and multimeter for voltage as it was explained in previous posts.

- there is an extra device for measuring on all consumption as house per load, as grid for taken/injected, for FRONIUS product, for Multiplus charger and inverter.

- at this step, i was trying to monitor battery and make necessary mathematic calculus for what i extract from battery, what i take from grid and what i use finally on house; the result is all time that is a percent of loosing energy in....don t know where.

- more of those, i was using also for monitor battery, according with COLOR GX possibility- BMW 700 connected on VE.Direct as also MultiPlus 5000/70/100 on Ve.Bus.

for all those possibility of settings , it was same result finally, with a disparity around 30% between source of energy and what is used as load.

- as a personal opinion, in the case that i was using MultiPlus 5000/70/100 on Ve.Bus, the all ESS system it was responding more quickly/faster for the variation on the load.

Did you also look at AC Current? if there are loads with a bad power factor the Watt numbers can be totally different than VA numbers.

first of all, i was indicate my ID in the VRM in the scope to can be verify/check my information related to the subject of my topic here.

- in one hand i put in pictures , parameters that my ESS system show for an normal user

- in another hand, i have, data on the same time for the same load , taken in 2 different ways:

- by multimeter and current clamp meter in AC and DC

- data as current and voltage taken for thirty part device as also values for parameters that i have in pictures, parameters that came for mathematical calculus for primary data taken by that device. to be honest, i make also same pictures for those data as also for pocket computer needed to make some calculus very quickly.

- if needed, in future, i will post also pictures with VA data, as i can supervise/check this kind of parameter as also power factor that it was actually in few pictures.

at the end of the day, i can follow another way to investigate - that you can suggest - for this discrepancy that i was pointed out from the VICTRON data in ESS system; i was investigate as much i was able to do it and i m open to any suggestion. for the parameters involved in my investigation, there are logs and trends to can support my observation.

if missing new data or information from VICTRON to make clear what is happened here, in my opinion as user is that the randament /yield of any part involved in this system is not as in their specification or the last software/firmware is with some problems.

i m sure that will have a clear answer from your part at this problem, easely to understand by the final owners of your systems/hardware. 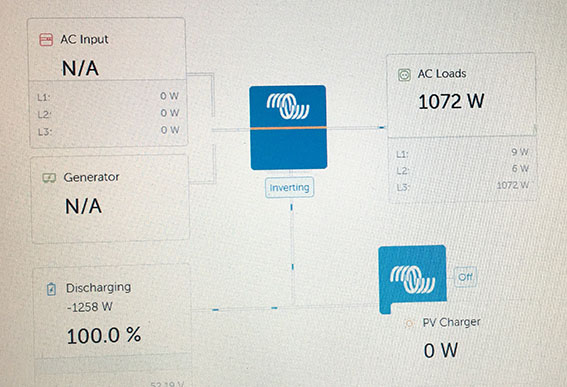 return with some new data, so i will wait for some answers. 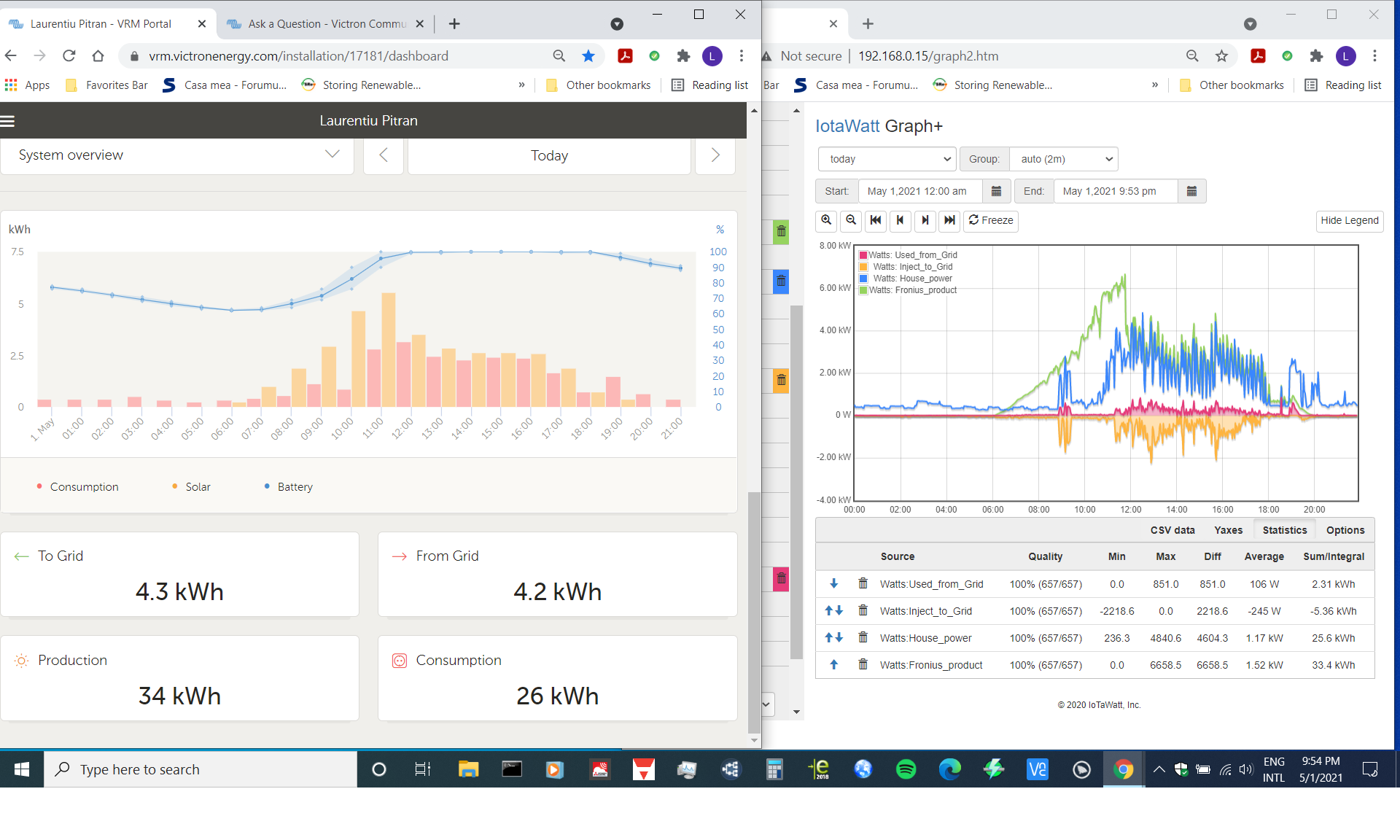