System: Eight 116 A-h Firefly AGM batteries combined to a 464 A-hr, 24V bank in daily cycle service aboard a sailboat. I installed the balancers for two reasons. Since the Firefly batteries, like most AGMs, can not be "equalized" in the normal sense, they need a balancer when connected in series. I also wanted an alarm system to alert me to an out of balance situation so it could be corrected before batteries were damaged by long term under/over charging.

I used two Balancers, each wired to half the battery bank as shown here: (Half bank shown, the other half had no connections o this side except at the + and - bus bars.) 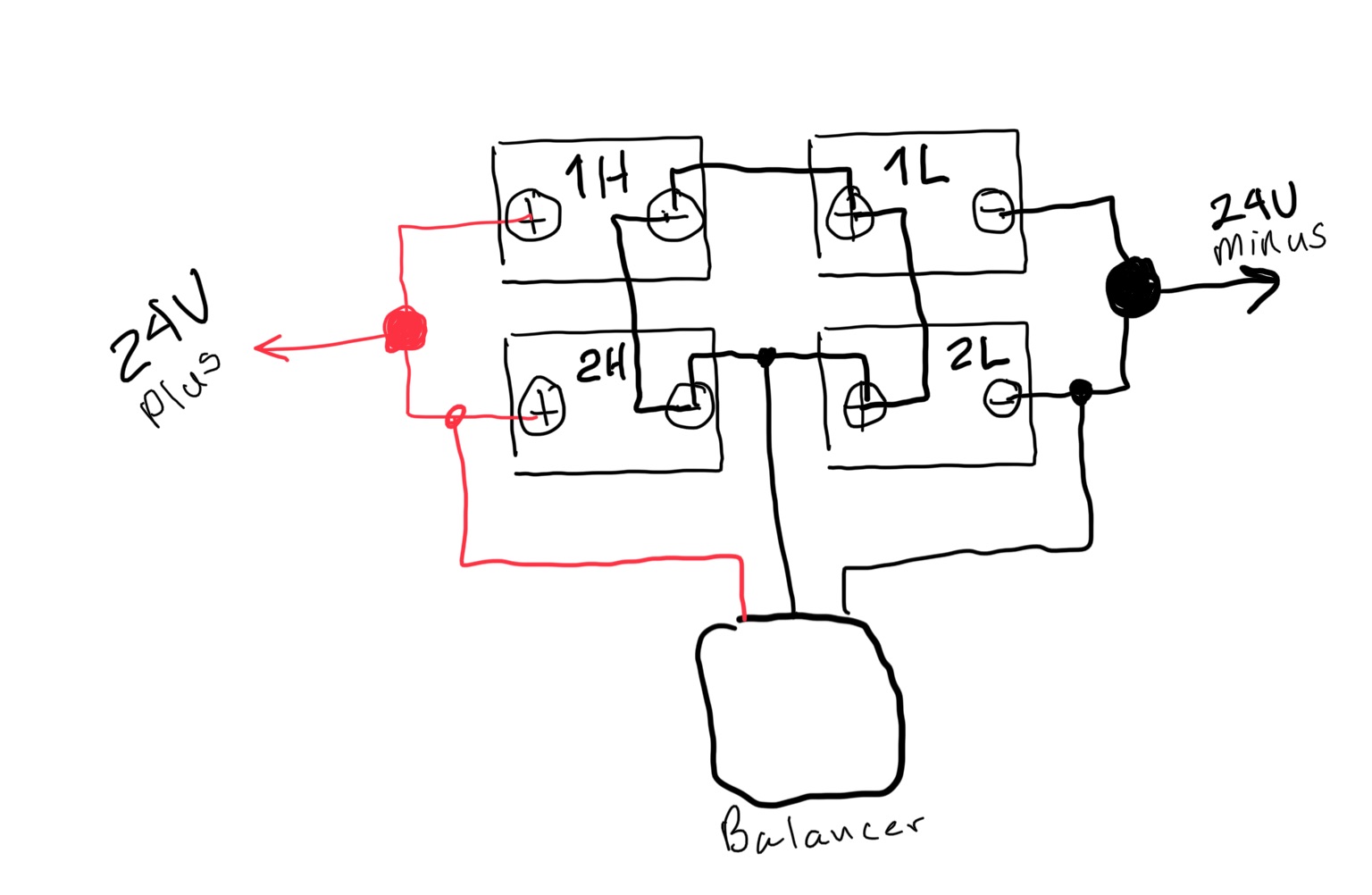 All cables are all length matched, and connected to proper bus bars.

When I started having unexplained problems with battery capacity, I dove down deeper. The balancers switched on with every charge cycle as designed, and never showed more than a transitory illumination of the balance lights. The alarm never went off.

When charging in absorbtion at 28.8V, I measured the voltage from 24V(+) to the midpoint as wired. 14.4V, and also from 24V(-) to midpoint, 14.4V. So far so good. But them I disconnected the wires between 1H/L and 2H/L, isolating the two series pairs. Now the source of the issue became clearer.

Note that this state of affairs was essentially the same on the other half of the battery bank. The batteries were "perfectly" balanced as a GROUP of 4, but the individual series pairs were seriously out of whack. In thinking about this with this data, it becomes clear that when wired as recommended there is NO WAY for the balancers to fix this problem, or alarm when it happens.

Am I missing something? Should I have skipped the midpoint cross-connections and just wired a balancer for each series pair and been done with it? Is there a downside to that (other than the cost of the balancers)?

This is exactly what I asked before and never got a good answer for...

It does seem that people are missing the point of the question.

I am glad to see I am not the only one who questions Victron's recommended wiring protocol for these Balancers. I don't KNOW that Victron's system is wrong, but somehow I ended up with wildly out of balance batteries. That should not have been possible if the balancers were connected in an effective manner.

Here is a demo of how the balancers work. http://bb-demo.victronenergy.com/ So yes they do need the mid point voltage for reference.

It is better to disconnect the whole bank and test each battery on its own rather than still in the bank.

It does sound like two of the batteries are not well however. Are all your other settings according to battery manufacture specification including charging c rating? How deep have you been cycling them and have they been charged up properly everyday? Enough absorption time?

When battery voltages go up like that it can indicate a problem inside the battery like sulfation, leading to higher internal resistance and voltage can rise like that.

I KNOW the batteries are not well! They are VERY not well, down to maybe 25% of nameplate capacity. The battery manufacturer has reviewed all my settings and charging regime and pronounced them acceptable.

If the Balancer had been doing what I expected it to do, it would have alarmed and highlighted the problem long before the damage was so severe. Maybe my expectations are too high, but I don't think so. I know there are other tests I could have/should have have done, but I assumed that the balancing of the individual batteries was fine, because the balancers were taking care of that. Lesson learned. Don't assume, and don't turn over routine testing to automated devices!

I am not at all suggesting disconnecting the midpoint. I am suggesting changing from the original set up to one that looks like this: 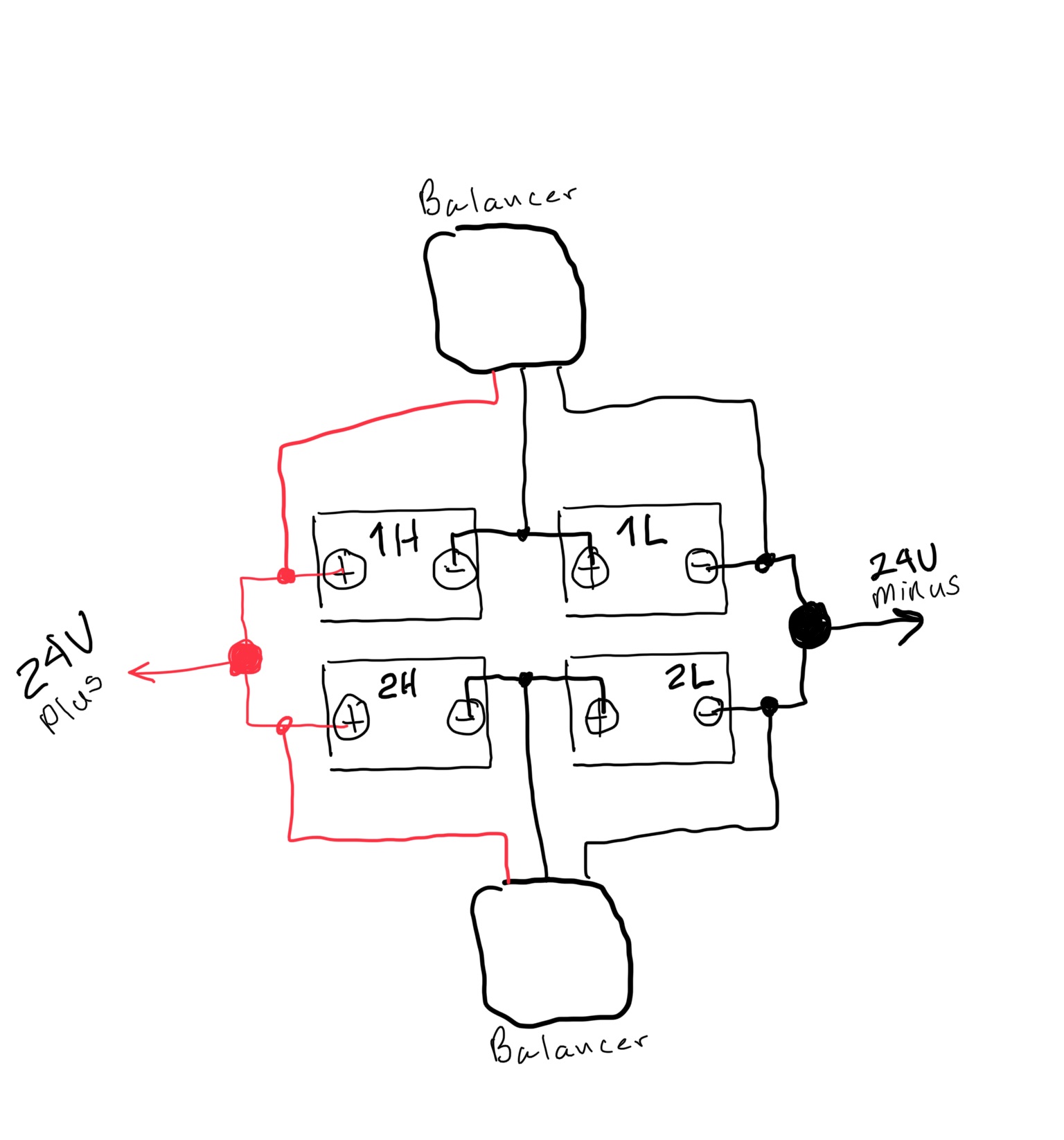 Wiring like this is more expensive, with more balancers, but the batteries are expensive too. And with this set up ALL the batteries have to be at the same voltage all the time, baring an internal short or other problem. And if the balancers can't fix that, then I'll see it in their operational lights and alarms.

Other than the cost, is there anything wrong with doing it this way? Will it have any negative effect on the behavior of the balancers? I assume that each pair of batteries behave as a seperate "bank" and are balanced as if they were standing alone.

That is how it should be wired. All cables equal lengths. Short as possible in midpoint.

How is your bank excluding the balancer wired? I have always found in a bank like yours two batteries always work more than the other two, depending on how it is wired. Battery rotation helps prolong life a bit but I think in your case it's a bit late.

We have banks wired as you propose. Better current sharing etc for loads. Just good practice.

I have systems with balancers and have not seen this issue except on older banks near end of cycle life.

Proposed setup but need advice and confirmation on compatibility

How do I know my Battery Balancers are alive?