The quattro is configured as ESS, the 3300ah battery bank is made up of 2v OPZ batteries and is reporting 98% charged, each battery has been tested and is charged to between 2.11 and 2.13.

The system has been operating flawlessly for nearly 2 years, then 2 days ago the power in the house kept coming on and then going off (during a period of around 15 seconds).

The Inverting light comes on for approx 15 seconds and then goes out followed immediately by the float light for 1 second, then all lights off for one second. This cycle then repeats indefinitely.

No errors have been reported by the CCGX.

Any idea's would be appreciated.

Is the site online? and if so, what is the name / VRM id? (I can take a look for you if you want)

Hello Daniel, I've checked the battery connections and fuses etc and all connection are tight, the battery voltage at the Quattro is 25.4v. At the moment the house is connected directly to the grid and is by passing the inverter. I've put the inverter into charge only mode.

I've looked into it, it seems the battery is disconnected. Please have an installer look at the system if you cannot find the problem.

Hello Daniel, the batteries are connected and I've read the voltage on the battery + - on the Quattro unit and it reads 25.3v, so the bank is obviously connected.

The CCGX also confirms that the batteries are connected with a voltage of 25.1.

This voltage is generated by the Quattro, it is not coming from the battery. The battery is disconnected.

Please have an electrician / installer check out your system. A loose connection is a potentially dangerous situation.

Hello Daniel, An electrician has now disconnected the battery bank from the Quattro's battery +- terminals and measured the voltage as 25.3v, he also checked the fuse which is also ok. Do you have any other ideas?

The quattro is turned off at the moment so if you want to check anything let me know and I'll turn it back on again.

it's the 'The Barns' site I assume?

look at the VRM graphs, 'DC voltage' is stable (as it is provided by the Quattro), and drops to very low without current drawn.

This is a sign the batteries are somehow disconnected from the Quattro.

Try putting a load on the battery and see what happens? 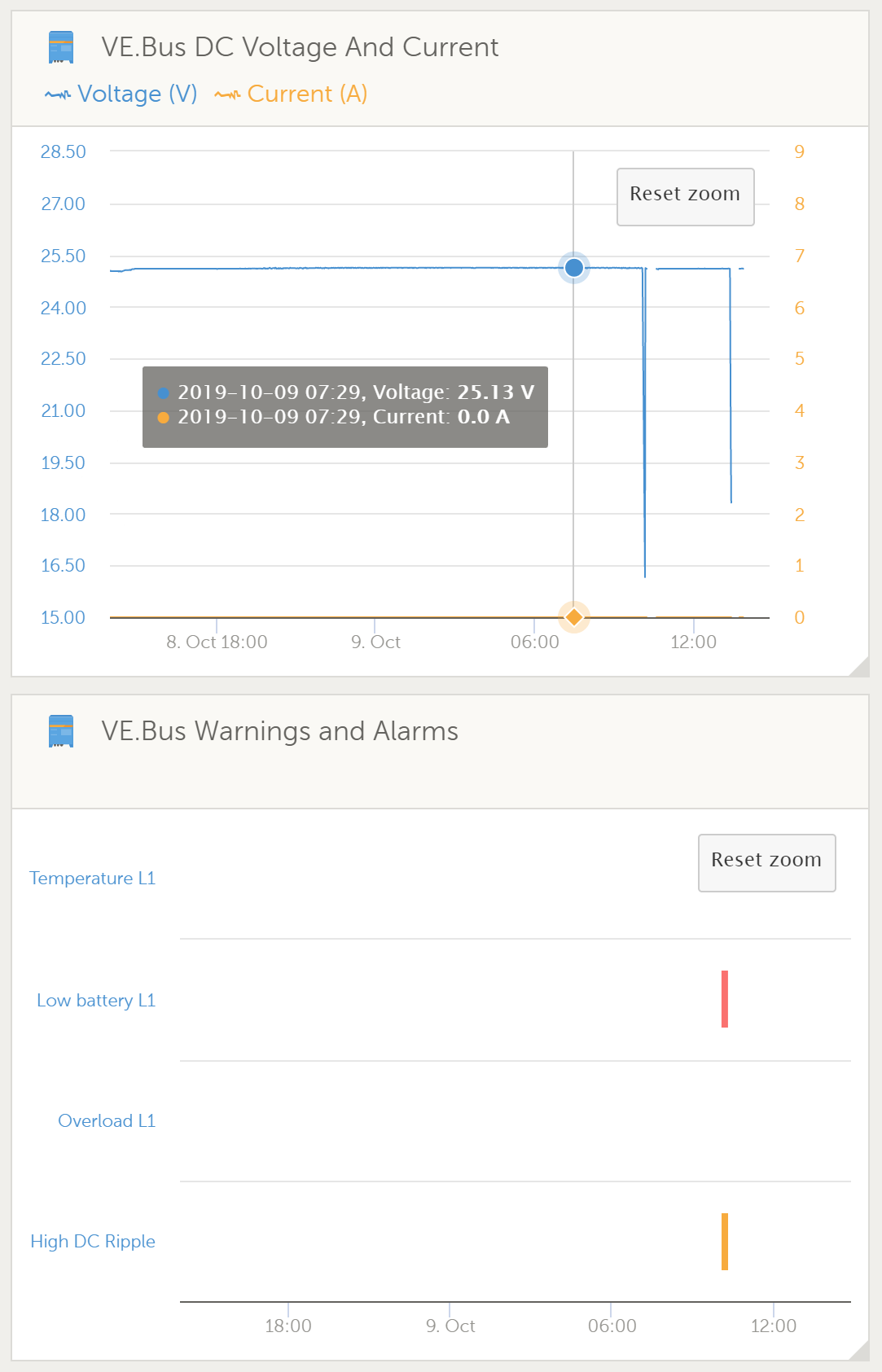 Hello Daniel, I have installed a new Quattro 24/8000 and the system is now up and running again, not the battery bank but a faulty inverter (I'll send it back for repair).

Thanks for the update, I've never seen that before!

Question regarding SOC limits - Why is the active SOC stuck at 70% ?

Scheme of the system with stabilizers and Fronius