I have tried to carry out a few initial tests, but get varying results. When no load is present (on the outgoing contactor terminals) and the Rem On/Off is opened, the safety contactor opens immediately (as expected). If I generate a load (e.g. a Quattro inverting with 2-3kW), the contactor can take anywhere between 5 and 20 seconds to open. Presumably the BMS 500 isn't intelligent enough to command external loads (such as a Quattro/Multi) via VE.Can -> Cerbo -> VE.Bus, so how will the shunt determine what is an acceptable current level to open? 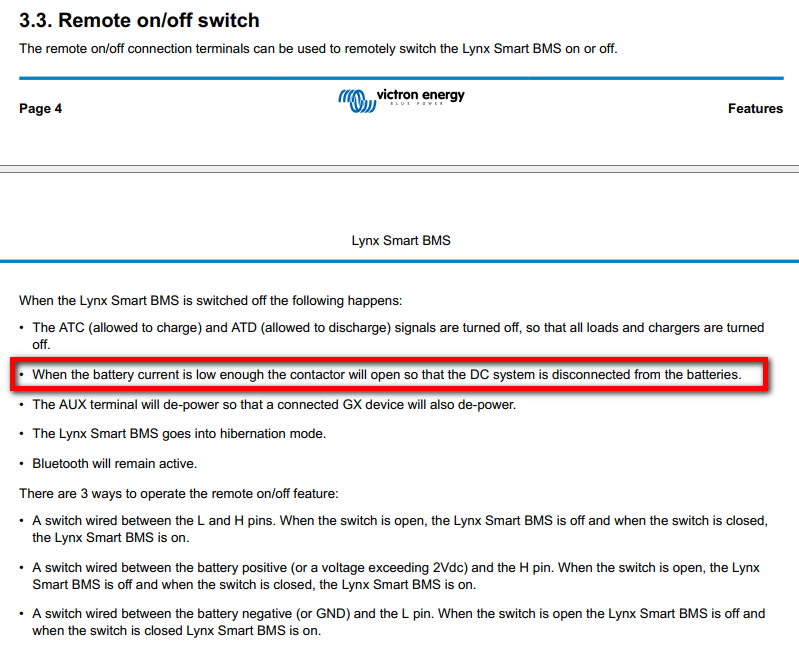 The (dis)charge current needs to be at 40A or less before the contactor opens. This is to protect the contactor.

FWIW, there is always a 2 second delay for the contactor to open, which you also need to take into account.

>>Presumably the BMS 500 isn't intelligent enough to command external loads (such as a Quattro/Multi) via VE.Can -> Cerbo -> VE.Bus<<

edit: in case the Multi/Quattro is late in replying the DVCC request, there is a timeout of 20s, which is what you are experiencing.

Hi @Stefanie and thanks for your response,

Loads/chargers will be controlled by DVCC. I am confident that the majority of equipment will shutdown (even if there is a 20 second delay), however, I am also powering a 48V motor used for propulsion. So, it would appear that if the motor was consuming >40A and the Remote On/Off was OPENED, nothing would happen until motor current became <40A. The reason I am investigating this, is that I was potentially looking to use the Rem On/Off as a form of isolation - but it appears it can't be relied on, under certain conditions. I fully understand the need to protect the contactor, but this then removes the option for operator isolation of the system. I will need to look at interlocking the 48V propulsion system with any potential shutdown of the Lynx 500.

When will VictronConnect on Mac support assistants?