I'm hoping that someone knows, definitively, how this Blue Smart IP22 12V 30A 3 output charger (available as 1 and 3 output versions) handles the specific needs of each of the 3 outputs? Are they handled independently? For example each of the connected batteries are depleted to different extents, perhaps #1 only requires maintenance/float whereas #2 requires charging from a 30% state. I wouldn't be so concerned except that the VictronConnect app only shows single charging information (as though this was a single output instead of 3). It's a little difficult to envision a scenario when all 3 outputs should be handled as single..? Unfortunately Victron does NOT address this issue in ANY of their documentation. Also, is each output capable of 30A output (so for example the 3 outputs performs exactly the same as the 1 output version if only 1 output is being used)? Someone mentioned to me that they "thought" that the 3 output version was only capable of 10A per output channel, max, or perhaps 15A per output in the case where only 2 outputs were used.?

grayjp5 commented · Jun 02, 2022 at 04:34 AM
Wow, surprised that nobody knows how this device functions.? The dealer sure doesn't and states that they are very annoyed that Victron the company refers all questions to them. As everyone on here surely knows they don't support their products. Such a shame. I'm returning what I have from Victron (fortunately within 30 days still) and going with a company that values their customers (at least a bit). Review and comment sections here I come... Good luck to the rest of you. I have no doubt that the Victron "5 year warranty" will never be honored based clearly on their attitude towards customers.
0 Likes 0 ·

The Victron Community is not an official support. There are only a few Victron employees active here.

The intention is more that end-users helping end-users.

Sometimes a question is not long enough on the first page to be seen from someone who can answer it.

If your dealer don't know the answer he can ask his local Victron sales manager. If your dealer can't do that or don't want to do that you should look for another dealer.

grayjp5 Matthias Lange - DE ♦ commented · Jun 06, 2022 at 09:24 PM
It seems to be the only option as Victron doesn't support their products. I have only one local dealer. Neither they nor 2 other remote dealers are willing to do this. It isn't even presented as an option. They all seem quite annoyed that Victron dumps the responsibility onto them, actually, since they typically have thousands of products to support. Victron really should step up and take responsibility like any other reputable supplier.
0 Likes 0 ·

Does anyone know whether I can use output 1 for charging and output 2 as a +12V signal output to my CBE distribution board to detect whether the charger (i.e. camper van) is connected to 230V or not? Will the Blue Smart give constant +12V on output 2, or cycle between outputs, which will turn on and off the +12V "signal" in my case?

The reason I need this is that my legacy CBE CB516 charger had a "S" net +12V signal output to inform the CBE distribution board about the 230V connected state. This is used both to turn on the "230V connected" led on the control panel, and to administrate the charger relay for starter battery charging.

The legacy "S" net +12V signal was rated 50mA. Will the Blue Smart "push" too much current which may blow my distribution board?

If this is possible, will somebody please guide me through any important config settings?

grayjp5 grayjp5 commented · Jun 04, 2022 at 06:51 PM
Also, secondarily, in what scenario would you want this shared output approach? Since batteries can vary in their specific state, which one is it basing the charge profile on?
0 Likes 0 ·

As full charge is available across all batteries the one with lowest SOC will draw the highest current. Batteries will become partially equalised. During absorption this will complete. Charger will only drop to float once tail current drops. At this point all will be charged equally.

Shared output with multiple batteries will depend on actual battery voltage. With identical batteries this is the same as state of charge.

Tail current limited switch to float is only on the newer rev 2 chargers and must be configured by the user.

grayjp5 kevgermany ♦♦ commented · Jun 05, 2022 at 06:14 PM
How do I know if I have a "rev 2 charger"? It was recently purchased, but could be older inventory I suppose.. Can you please refer me to the area of the manual that describes configuring the tail current limited switch?
0 Likes 0 ·

Look at the identification sticker on the side of the charger to determine if it is HW Rev 1 or 2.

I just checked the online manual and the tail current feature in HW Rev 2 chargers is not mentioned yet, it still needs to be updated. But you can find this feature under advanced settings with expert mode enabled, under the 'Absorption' section. 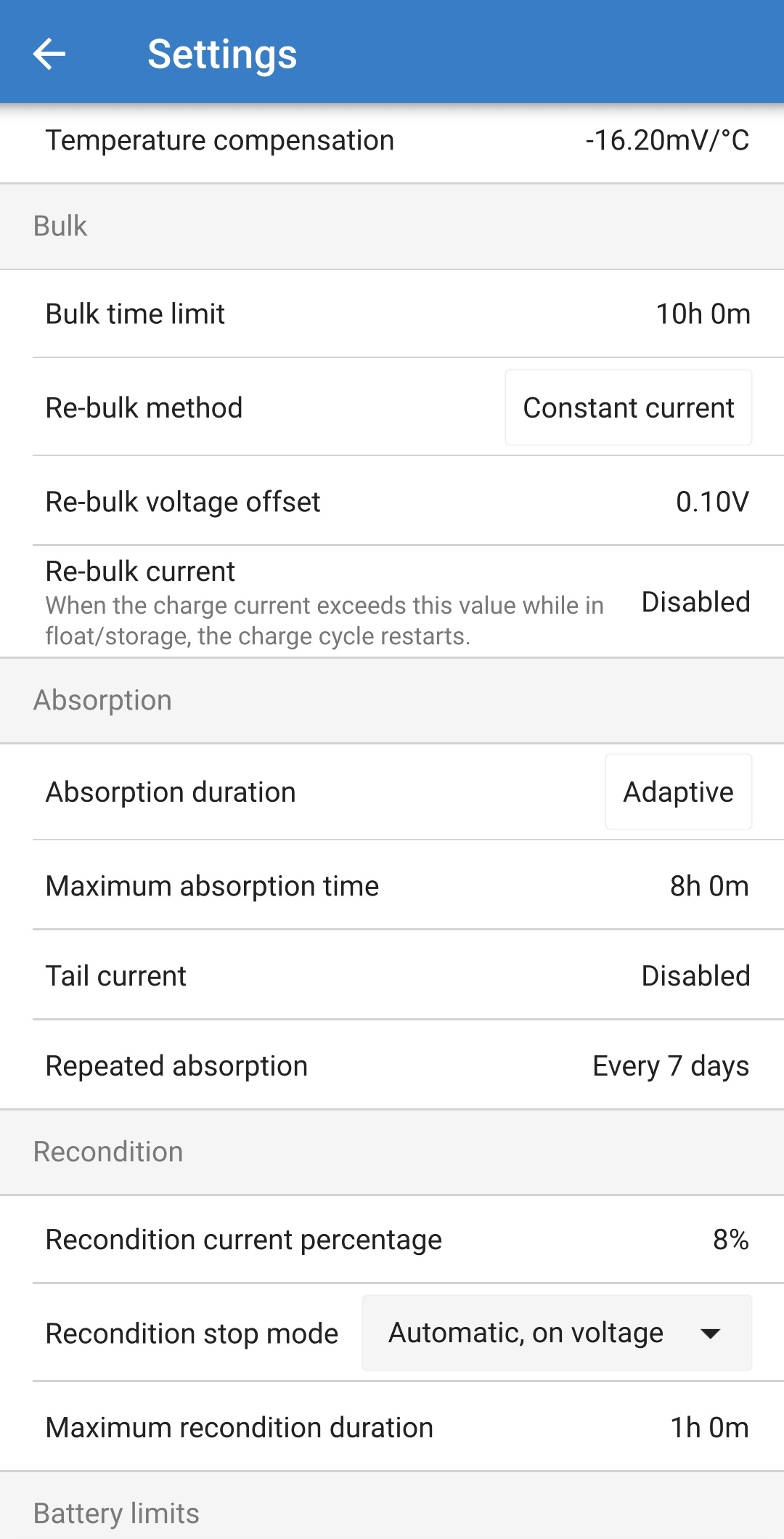 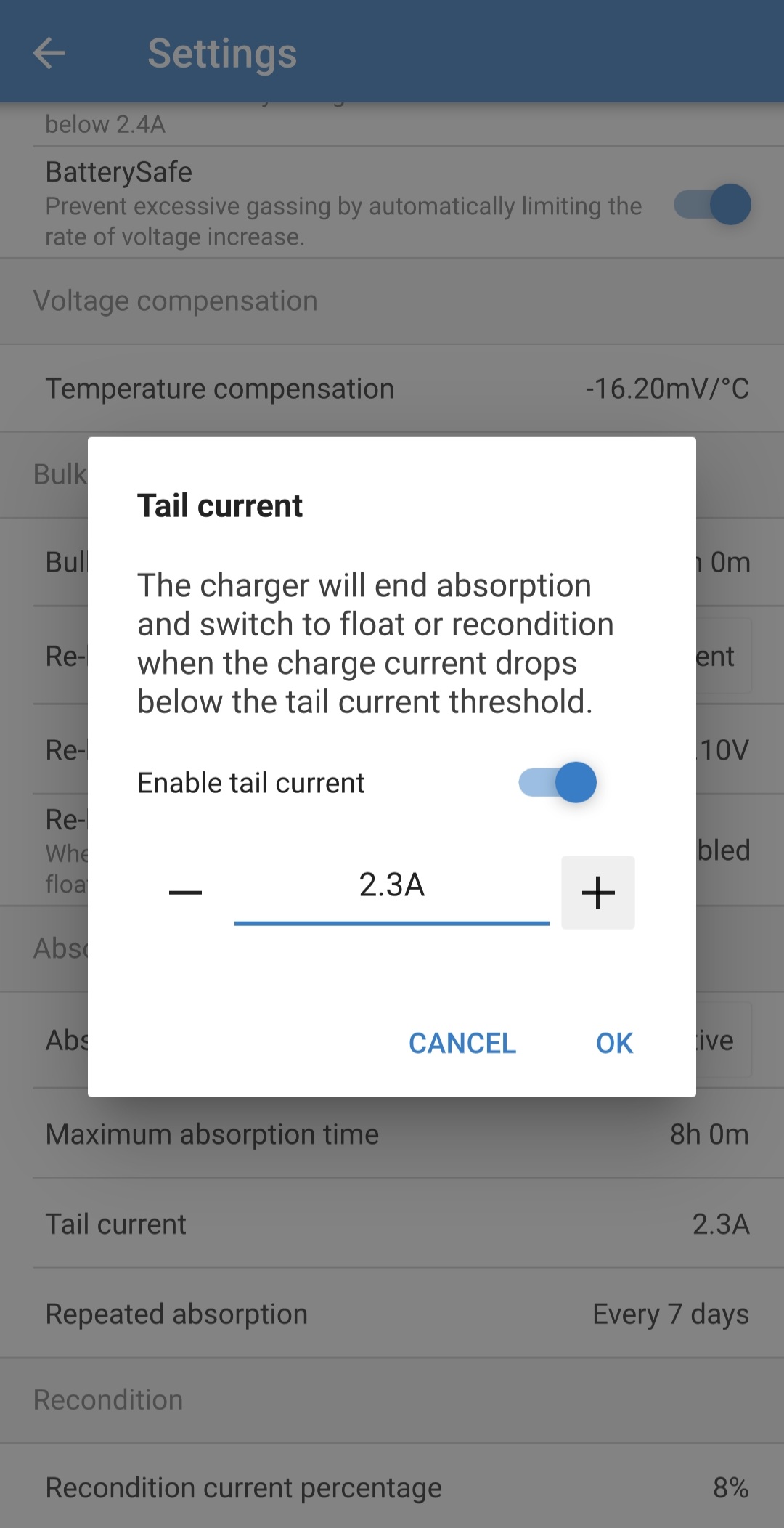 Note it might not be a good idea to use the tail current feature if you are charging multiple batteries simultaneously and/or have loads connected.

grayjp5 kevgermany ♦♦ commented · Jun 05, 2022 at 06:22 PM
Perhaps I'm misunderstanding but now you are saying that each output is separately monitored and current is adjusted accordingly? Or are you saying that the current output is constant across all outputs and is simply regulated by the charge state of each battery (i.e. lower SOC will naturally draw more current)? If the latter, does Victron offer a similar charger model that's a bit "smarter"?
0 Likes 0 ·

Mark ♦♦ grayjp5 commented · Jun 15, 2022 at 04:07 AM
Output current from each individual output is not 'controlled' by the charger. Each output has a FET isolator so each battery is isolated from the others. The current distribution depends on the voltage of each battery while under charge and the battery capacity - so basically the batteries determine this. If you need current regulation of each output and/or separate charge cycles you really need a separate charger per battery.
0 Likes 0 ·

I would like your opinion and advice in regards my situation. I have boat where I have installed Sterling Power Alternator to battery charger. One output is dedicated for starter battery without any adaptive stage and other one I am using for AGM battery with 4 stage. So far I am using it for more than 6 years and I am very happy with it. I have 5A small charger that I attached to input of this charger so I can maintain battery once when boat is connected to shore power. I want to upgrade small 5A charger and purchase Victron charger with capability of PS mode. I am looking for Blue Smart IP22 12/30 charger and I would like to use it in this case in PS mode to supply Sterling Power who will do the job. Since that at the moment shop does not have version with one output I am planning to purchase version with 3 outputs. I am planning to use one output for supplying Sterling and other output I was thinking for use to supply some consumers like freezer which is 12V as well. I am aware that total 30A will be shared between two outputs (in this case) but is that mean that 30A is shared like 10A for each output or depending of load each output will share it? Any comments and feedback will be much appreciated.

How much voltage is needed to start the MPPT?