A new version is available for testing. Changes compared to previous one, v2.80~36 are:

mvader (Victron Energy) ♦♦ · Jan 16 at 11:52 AM
Ps. Now remaining work for v2.80 is testing, translations for all new menu items and checking out the open reports made here and elsewhere. Getting closer and closer :-)
0 Likes 0 ·

koro · Jan 17 at 09:19 PM
Hello, since the update to 2.80~38 it's not possible to load the batteries with more than 50 Amps. It is possible, to load with any current below 50 but not more. There is no difference between switching to limit the current or not. I'm running 3 MP II 48/5000 with 6 pylontech US3000C. In the batteryoptions the limit is automatically set to 222 amps. Could this be a bug since the update.

Maybe only a cosmetic issue on Relay 2 as this has no effect on the function. But "Funktion (Relais 1) {2)?}" doesn't sound correct. 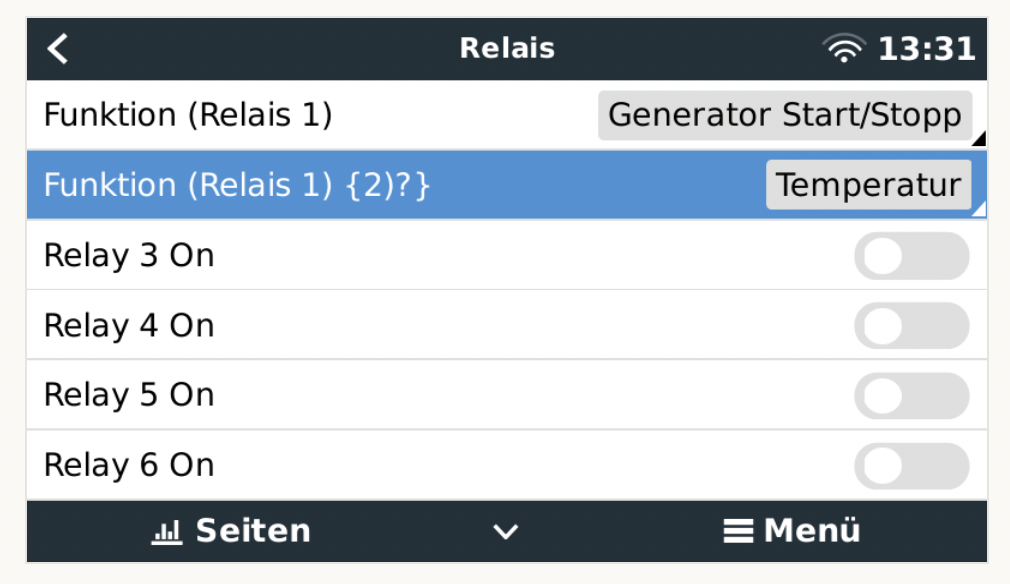 Stefanie ♦♦ mvader (Victron Energy) ♦♦ · Jan 16 at 01:46 PM
Looks like I bug in translations (I had German language on). In English it looks fine. There is nothing obvious in POE (I think the last changes are not in this version anyway).
0 Likes 0 ·

that part of GuiMods? I don’t see that in our code.

Yes, they are part of RpiGpioSetup.

I think you have this (custom) file installed: https://github.com/kwindrem/GuiMods/blob/main/FileSets/v2.80%7E37/PageSettingsRelay.qml

I just checked (they do auto install from the PackageManager depending on settings). Yes, that's the file and probably something going wrong with the assignment when translations are in use (starting from line 52 - even if I actually have no idea about this code).

I wanted to add that in v2.80~36 it looks ok-ish with the difference that's English vs German language between Relay and Relay 2. Maybe this helps troubleshooting. 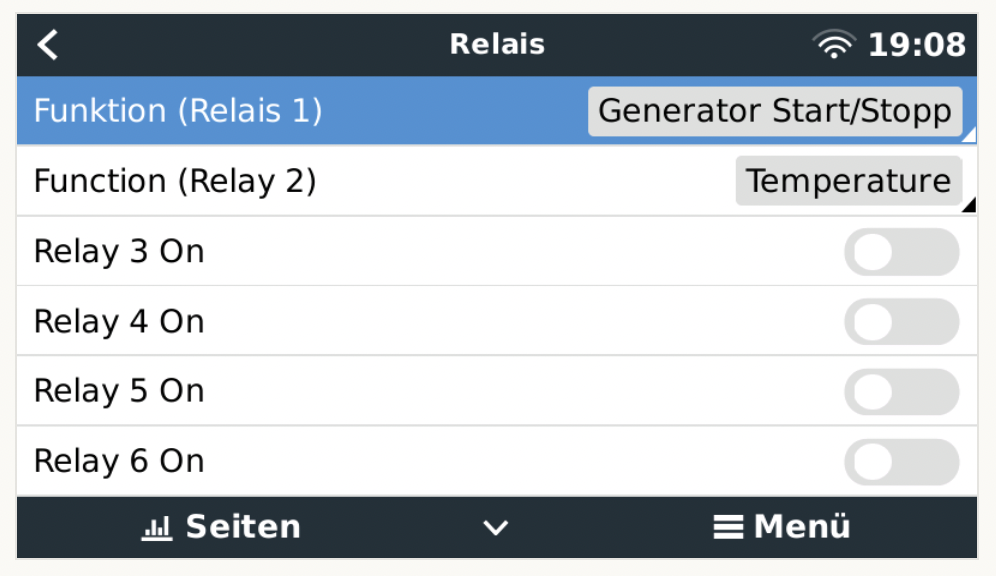 Kevin Windrem mvader (Victron Energy) ♦♦ · Jan 16 at 04:47 PM
The menu changes are actually part of GuiMods because it works on other platforms as well, displaying all relays that exist in the system. The RPI relay changes are in RpiGpioSetup. It adds relays 3-6, mainly to support Rob Duthie's Stetson RPI/Venus expansion board.

I looked at my code in PageSettingsRelay.qml for v2.80~37 (which is also used for v2.80~38) and I did not change anything for id: relay1Function (which is displayed as relay 2 function.

I did add code to display custom names for the on/off rows if the function is "manual", and also added setting the custom names.

I'm not sure how the translations work but they are based on line numbers then I HAVE added a lines.

If there is something I can do to make this work better, I'll be glad to make changes.

@mvader (Victron Energy) @Stefanie is probably due to the translation file. 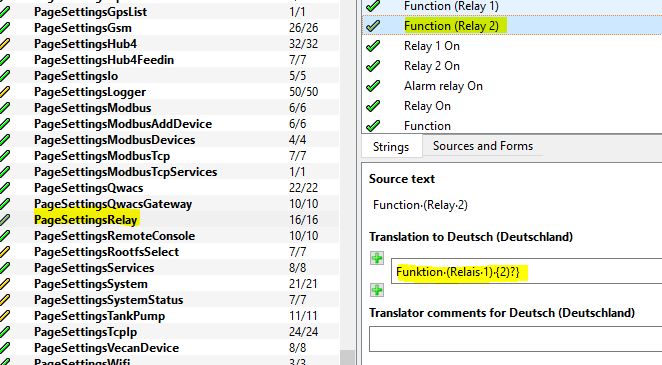 Yes, looks like the correct translation didn't quite make it into the GUI's translation file. As Matthijs said, they will fix it.

@Stefanie if you like you can try this translation file. Here's a little more "translated". But, it's not quite finished yet (not quite 100% yet)

I'm sure I've overlooked a few things, and the temperature control has also been revised. Do I still have to adjust the days?

I'm still having a strange doubling of kWh consumption showing in VRM Overview but not showing on the advanced graphs or flow overview. This is since v2.80~36 and now ~38

Is this related to: "When AC input set to "Not available" Consumption is doubled" ?

But I haven't changed the AC input setting, which says 'Disconnected' (when generator not running) and I cannot change it either, if that was the issue - System is off grid with generator on ACin1. 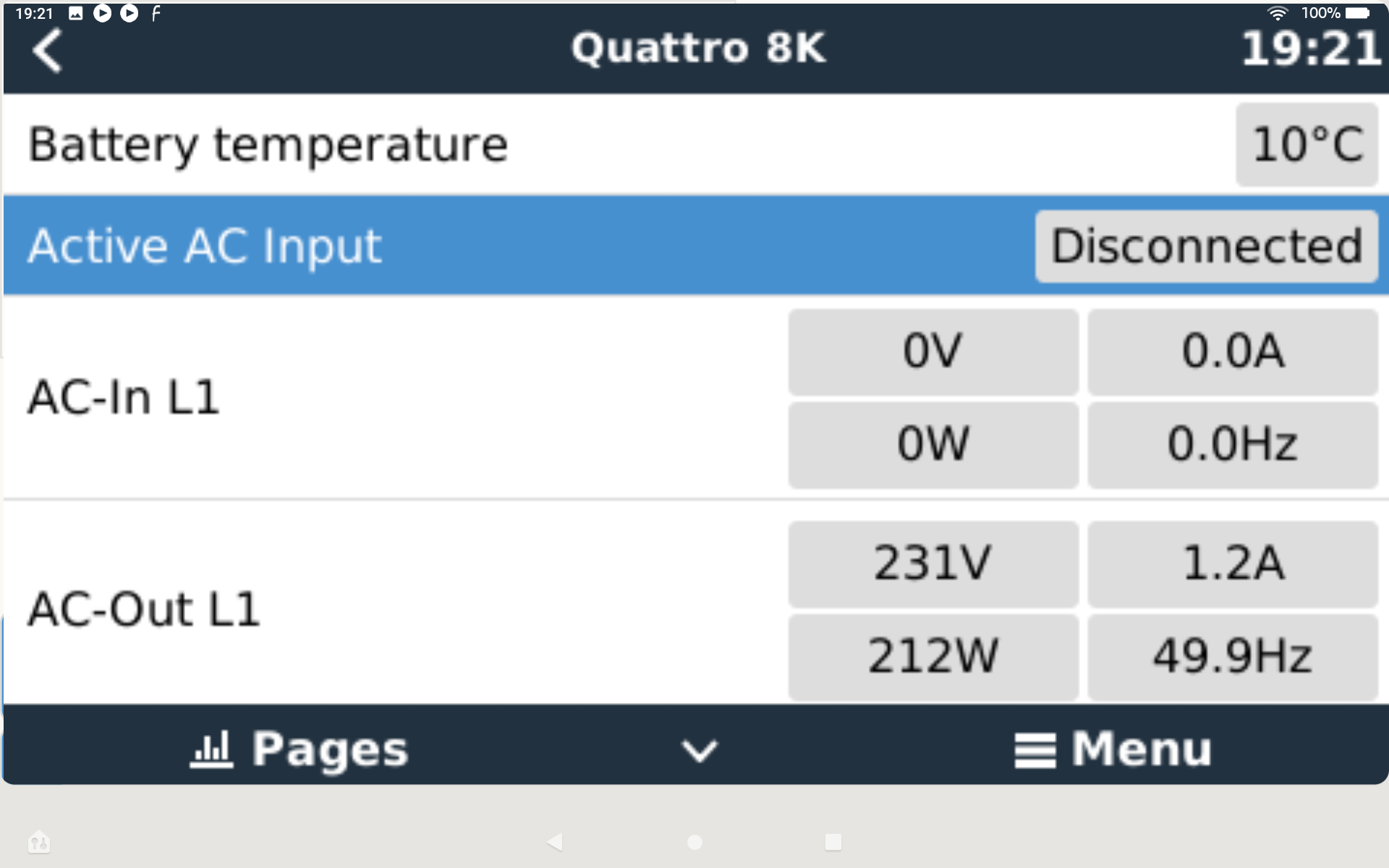 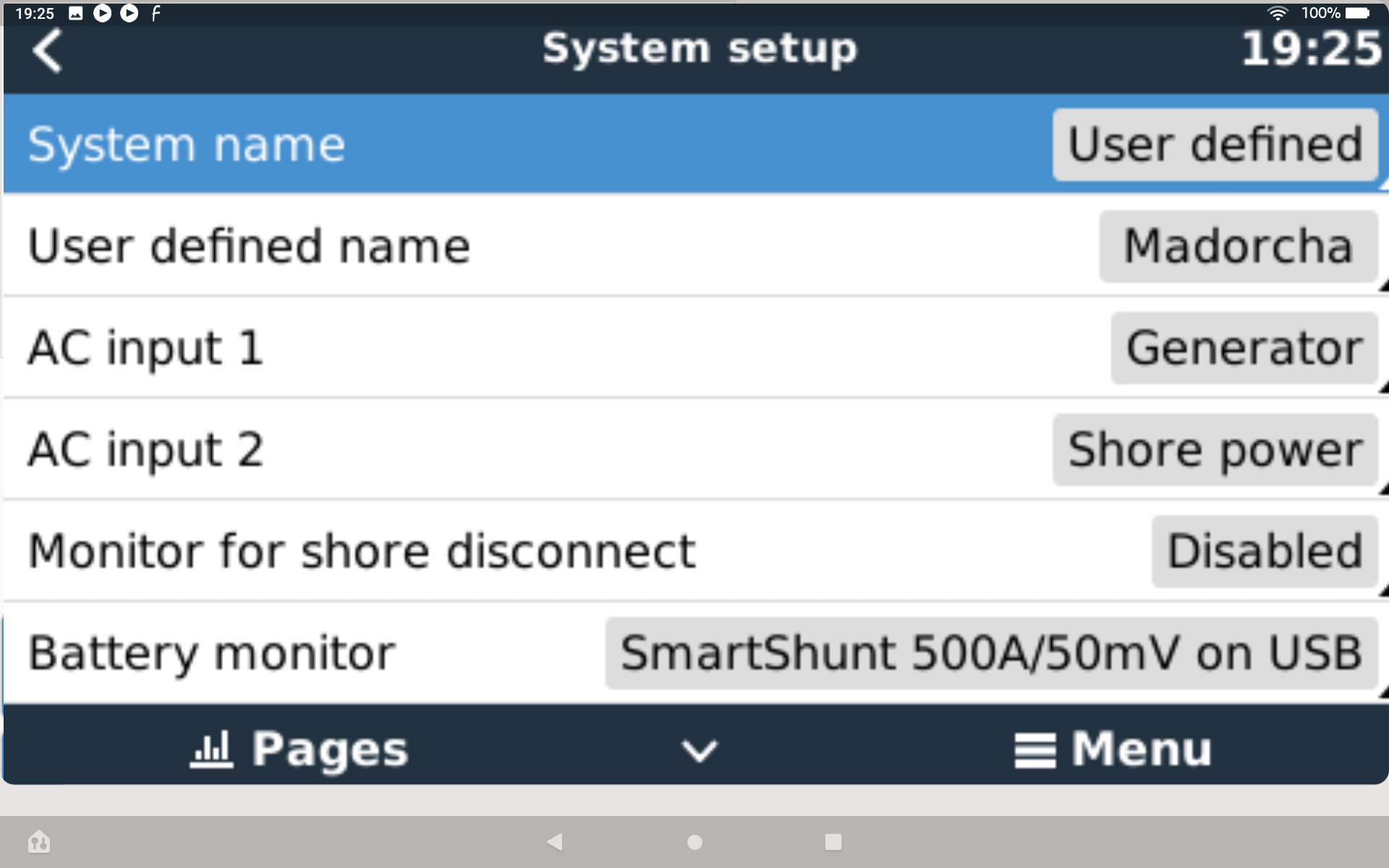 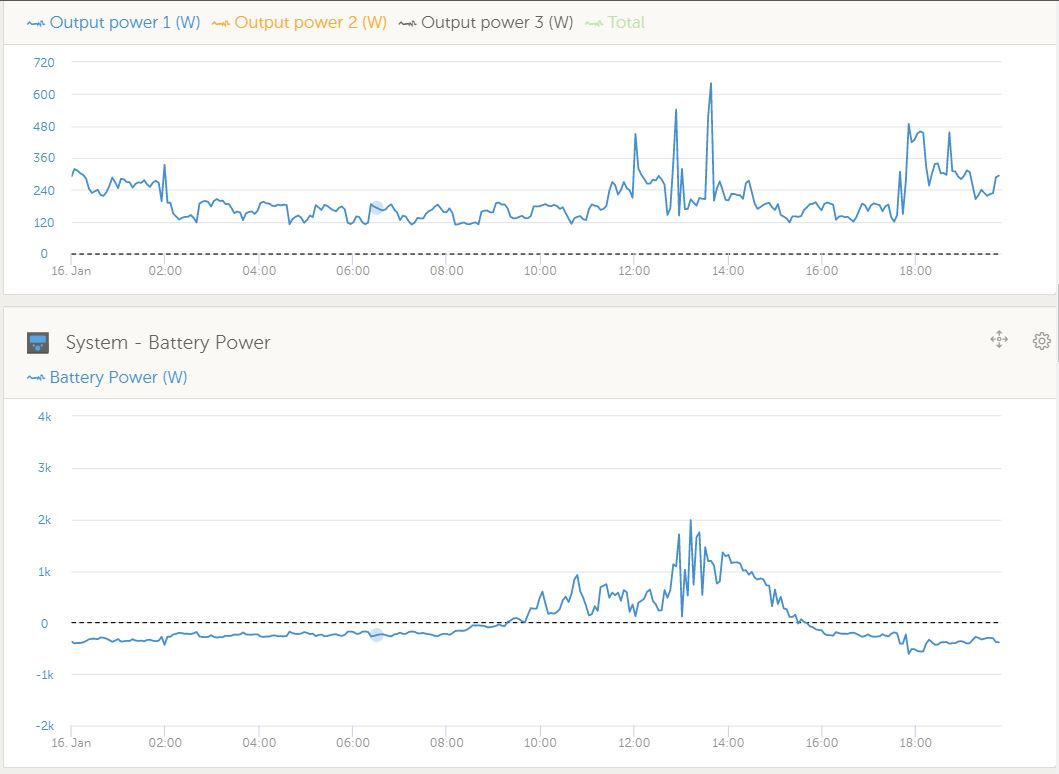 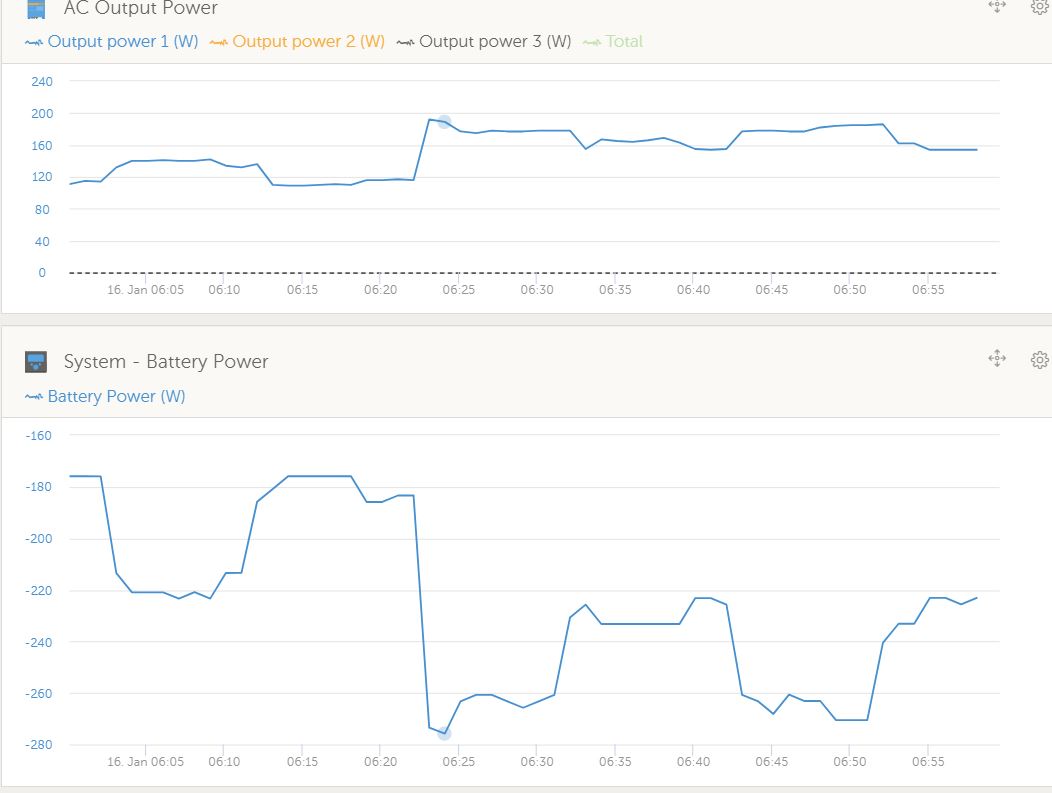 mvader (Victron Energy) ♦♦ · Jan 17 at 04:12 PM
Hi Al, we found an issue indeed - and fixed it. Fix is also installed on your system; normally we'd ask before doing that - but that was skipped- hope you don't mind we did install it! Could you let me know if indeed its working ok now on your system?
0 Likes 0 ·

I waited a few hours to check the overview readings and it does all look fixed now, obviously the last few days totals are still recorded incorrectly, but that's no big deal.

Thanks to you and the team.

Hi, @Stager so it seems you fixed your problem logging in?

the above is not related to the release candidate. To use opkg, you need to first set the proper feed. See the command line manual for more information. For more on that, please outside of this beta thread, I really want to keep it clean: beta only, and with proper description / expectation / question. Thank you!

Installation of other version is not a solution.

As I pointed above, the opkg update issue occurs on v2.80~38. Isn't that the version being discussed here?

Or maybe not correct feeds are sets especially to resize2fs.sh run?

I don't understand your first remark with regards to installation of other version not being a solution.

The answer to your issue is here: https://github.com/victronenergy/venus/wiki/commandline-introduction#steps..

I checked myself, and your opkg issue is really not a bug or regression in v2.80~38. The issue is that the steps as in the manual haven't been followed yet, or that the manual is incorrect. Anyway: in case not solved now, please make a separate question; thanks!

Another minor issue: in the GUI System Setup/Battery Measurements

If you make a battery visible and change the name to a custom name (in the same menu), the custom name does not appear in Battery Measurements menu until after a reboot.

Since installing (38) I have noticed I am losing consumption historical data in the VRM, as solar comes on line each day no consumption data is displayed and my "to battery" and "direct" data is skewed.

The real time data looks fine, seems to be a datalogging issue. I have toggled "has DC"

I will re load the previous and test to prove over the weekend and report back..

I lost Bluetooth at 05:59 this morning, so no Bluetooth or I/O menu options, I've done a reboot of the CCGX and only two of the four Ruuvi's have come back, I'll try bringing the other two closer, but they were in range before and worked the last few days fine.

I moved the two disconnected Ruvvi's closer and they re-connected in seconds, but after putting them back they lost connection again a few times, I'm not sure why they would have worse range today?

I was able to move the Bluetooth Dongle to a more central position and the two Ruuvi's with poor connection seem happy now, but still strange for them to be worse today after the last few days of being fine.

As a side note, I have found the CCGX has been rebooting itself once or twice a day on the v2.80X, it just did it again at 12:18 (UK Time) I wonder if I'm at the processor limits with an original CCGX and GuiMods, or if others are also less stable?

Wrt the reboots: on the diagnostics page on VRM, check the dbus roundtrip time. What does that number say? Should be a few milliseconds. Or maybe 10 or 20. But 100ms is already long; and indicates cpu overload.

The Ruuvi issue hasn't happened again since moving the dongle, but I thought it might be more a Bluetooth issue as it was the Bluetooth menu option that disappeared, so I assume it wasn't registering the dongle? Anyway maybe a moot point if it all works now.

I didn't know there was a diagnostics page, I haven't seen any menu button access to it either VRM or Venus, but just found it adding /diagnostics on the VRM page :)

per ~41 we added an auto-reconnect to the bluetooth usb dongle in the ruuvi code; that might take care of the issue you were having.

48 People are following this question.