When I had my Multi, the indicated AC loads were always within reasonable watts of actual load.

But once I installed my Quattro, I'm noticing a fairly constant difference of around 20%.

I have "has DC system" enabled and it seems to try and fudge that difference mathematically as DC system draw, even though the Quattro is the only consumer in circuit.

The current drawn, as shown on the BMV, is in lockstep with the BMS's reported current draw.

For example, right now the BMV is showing ~300W drawn from the batteries (confirmed by BMS).

The CCGX is showing AC loads of 180W, and a constantly varying number "DC System" of 20-50W, with the rest just... unaccounted for.

Again, there is NO other DC consumer other than the Quattro.

I considered the difference between resistive vs inductive loads -and with the lower draw example that might be true; since we have a lot of "wall-warts" for phone, computer, mifi, and other misc AC/DC converters.

But with the higher example, I simply turned on a 1500W kettle.

and a ruff diagram of the site setup and interconnections.

@Paul, I'll grab some snapshots and post them here this week along with a basic diagram.

The unit is running 430 at the moment and I don't see any "fixes" related to load accuracy as a part of 433 release. But there might be value in that upgrade.

I'll consider it. But I generally don't chase any vendor's firmware around as soon as it's released and prefer to let it percolate a bit, in case some errant gremlins made it into the code :)

For myself if I have a issue the first thing I do is try to isolate the cause then I would upgrade the firmware to the latest. just in case its been fixed as many times I have chased my tail and a firmware upgrade fixes it.

anyway there is always a risk with software fix 2 things create a new issue.

anyway is there a possibility that the CCGX has the battery monitor set to auto, try setting it to the BMV, otherwise its just more testing until others can duplicate

As you dont have any DC system draw off the batteries other than the Quattro, then turn the DC loads option off as there is no need for it Its only used if you are drawing off the battery directly for other loads,

are you using any assistants ???

I'm seeing similar strange behaviour with my Multiplus 24/3000. I just updated it to the 433 firmware out of the box, my old multiplus seemed ok but that's on an earlier firmware. I've got a separate thread..may/may not be related.

Here are some screenshots as requested

Image 1 is what we call our "baseline" draw during the day. That's with a couple of computers on and lights. 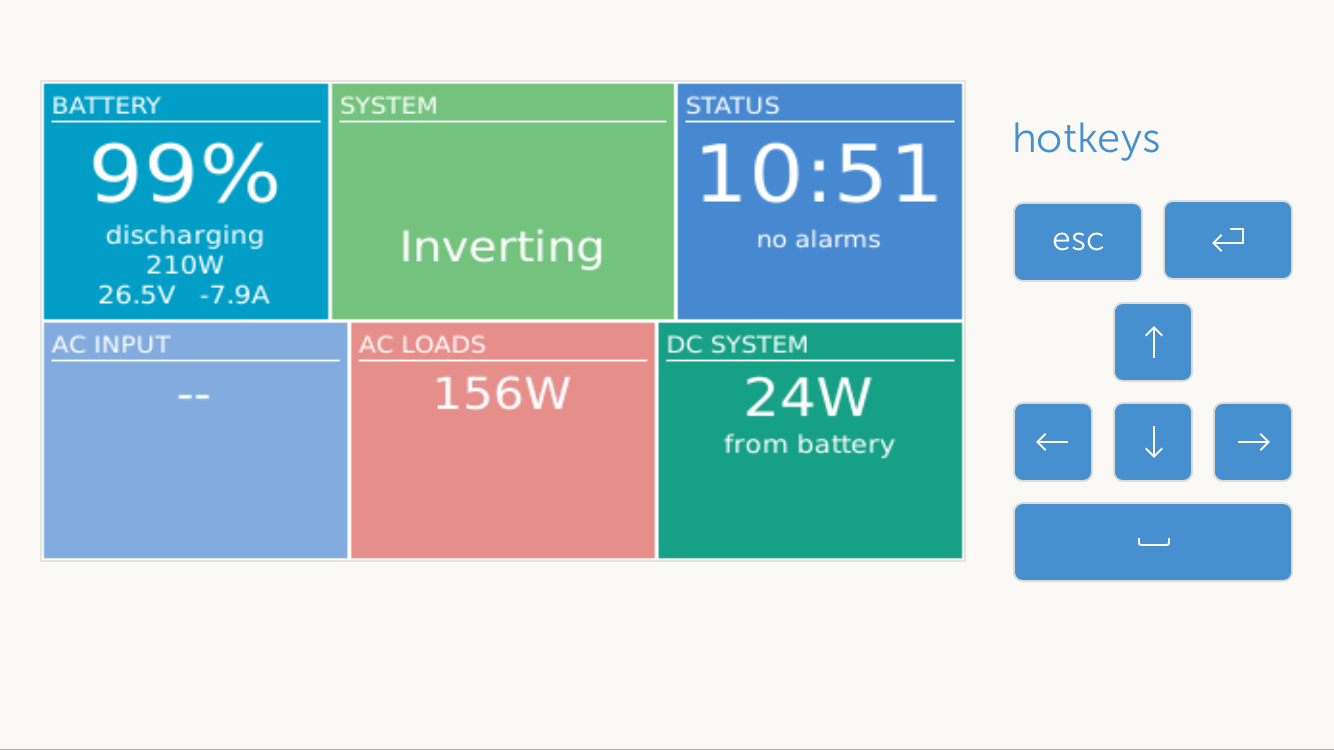 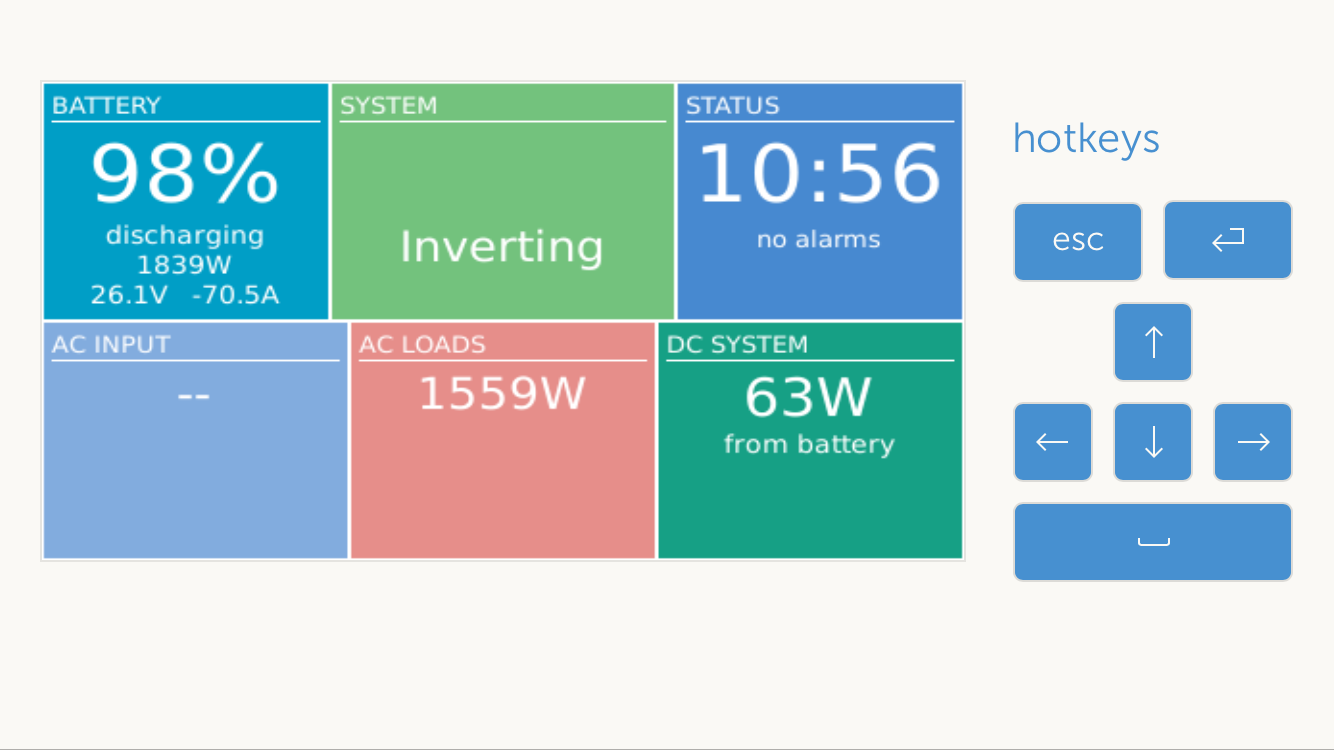 There is NO other DC consumer, than the Quattro, in system.

The discharging amount matches on the BMV and the batteries' BMS, almost identically.

The AC loads and DC system numbers will swing wildly, especially on the DC system side -sometimes in the multiples of hundreds, even though the loads are staying constant. Like in that image 2 example, it was swinging around 120w to 45w.

I can put a wiring diagram together but in rough it's pretty simple,

It's 24V, batteries are a pair of lithiums in series.

Nothing else is on the 24V side.

Hmm, I haven't seen that big a discrepancy under meaningful load. Yes, under small loads there is usually a constant-order error that is large-ish.

With the kettle example, can you put a clamp ammeter on the output of your Quattro and compare it to the measured output?

Maybe you have a particularly inaccurate current sensor on the output side. Or maybe you are getting a really poor efficiency on the inverter, because something else is wrong. I'd like to know what the real power is on the AC side to help narrow that down.

This is actually the second Quattro in this installation (long story) and it's behaving exactly the same as the first. I was hoping this would also have beeen fixed, but alas no.

The kettle is a 1500 watt load and it's confirmed with a killawatt plugged into the outlet it's on.

I'll try to get a clamp meter on it, but that might be a while. As isolating just the load wire will be quite challenging with the tight quarters in that area and I'm not really felling like taking everything apart..... again....

But I might be able to attach one further downstream. We'll see.

What I'm seeing is that the AC loads reading is actually low for what it (mathematically) should be. The samples were taken literally minutes apart and with no load change other than the kettle. I would actually expect to see at least 1700W.

And it gets even worse sometimes, with wild swings on the DC system. In addition, there is no DC consumer other than the inverter. So I should be seeing no DC current at all.

Okay, hold up. You're inverting here! And your inverter is not 100% efficient. And "DC Power" is really just software accounting, netting the inputs and outputs and attributing any delta to "DC demand."

On my inverters, when they are inverting, I see similar values.

When they are inverting at very low baselines, I see a "DC Power" very close to the datasheet zero-load power spec for the inverter.

And when they are on shore supply and basically just passing-through AC, I see the "DC Power" drop to something like 1/3 of the datasheet zero-load spec, presumably because the transformer and FET array are not really doing anything.

Here's some sample data, from a few nights ago, while inverting. The yellow line is the BMV-measured input power from the battery. Green is the inverted AC output. Blue is the calculated "DC load." So it is basically just a proxy for "internal inverter overhead and losses." 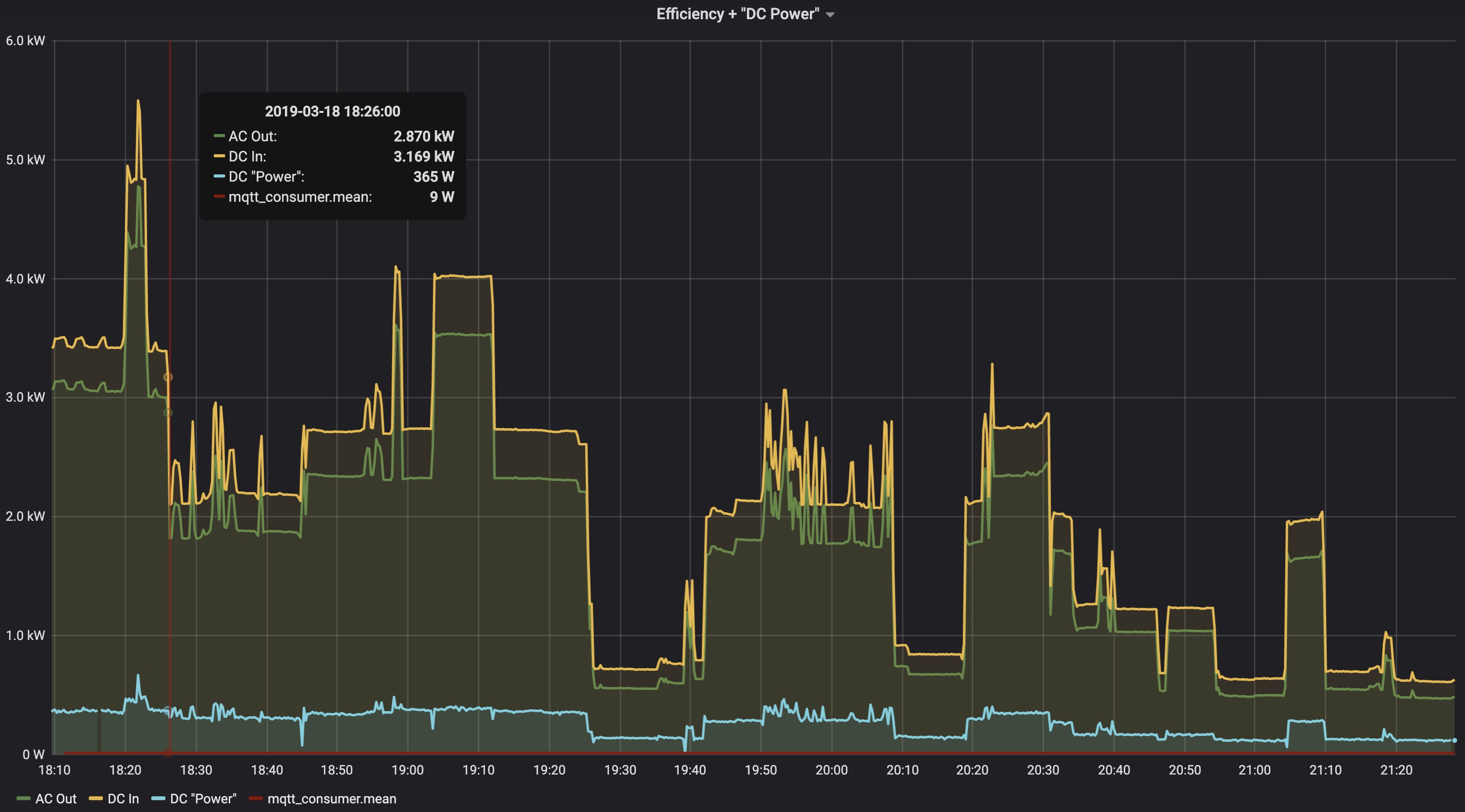 7 People are following this question.